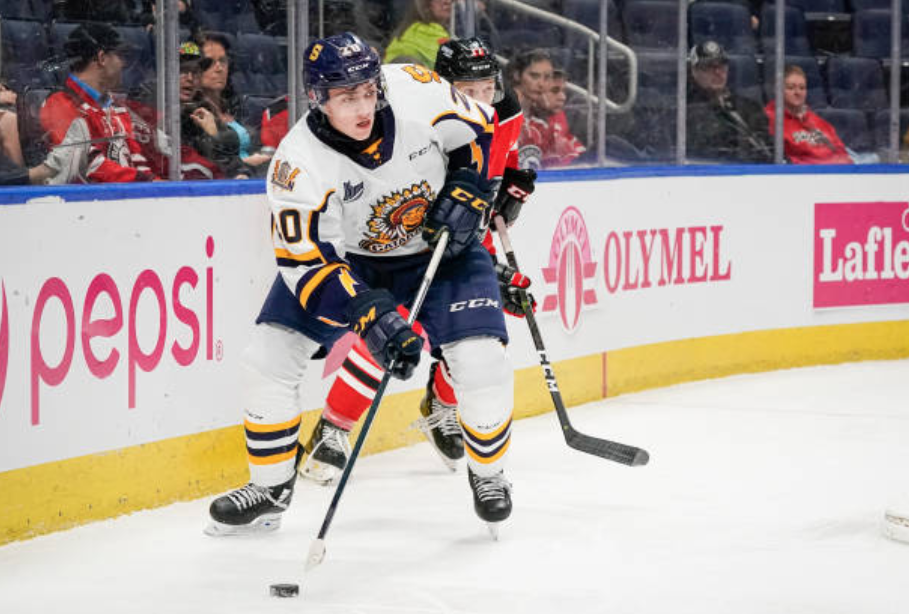 Nadeau is a left-wing power forward playing on the top line for Shawinigan with fellow draft-eligible Xavier Bourgault on right wing and 2020 Dallas Stars first-rounder, Mavrik Bourque at center. Taken fifth overall in the 2019 QMJHL Draft, Nadeau is more than a complimentary piece to this formidable line. He has been the mainstay for the entire season, including when Bourque left for several weeks in December to play at the under-20 world junior tournament and when Bourgault missed time with an injury. Nadeau has been used in all situations and leads the team in assists, points and penalty minutes. He’s also been consistent, never going more than two games without registering at least one point.

Nadeau is not the smoothest skater, but he uses his smarts and awareness to put himself in advantageous positions throughout the game. He is a strong straight-line skater who needs to improve on his lateral movement and agility. He is not weak in those areas; he simply is a heavy-footed skater. Olivier is a solid puck handler who knows his limitations. He will not force a play with a dangle, rather opting to go through or around the opponent or chip and chase. He will also defer to his line mates with a pass then find an open area or charge the net for a rebound.

Nadeau has good hands in tight areas along the boards and is adept at finding and banging home rebounds in front of the net. He can rip a one-timer and pick a corner, is excellent in board battles, and can provide a net-0front presence. Perhaps his most underrated skill is his passing and playmaking abilities. He does not draw people out of their seats, but his smarts and vision allow him to be a solid set-up man for shooters in prime areas. He also has a knack for making short, subtle passes to a teammate while he is engaged with an opponent.

Two more attributes Nadeau possesses are his compete level and defensive reliability. He is relentless on the forecheck, puck battles, and fighting for rebounds in the slot. He is used in all situations — late in close games, power play, and penalty kill. Defensively he is sound, reliable and effective. He knows when to help down low, puts his stick in passing lanes, and uses his frame keeping opponents to the outside and away from the danger areas. Nadeau seems like the type of player that winning clubs would want to have on their roster. He is not the star of the team but will be an important part in their success. He grinds, battles, has great hockey sense, and can fit in anywhere in the lineup.

Having an excellent grasp of game situations and overall awareness allows Nadeau to excel in any aspect of the game. He certainly has an understanding of time managements, as he has the ability to tie up a player on the forecheck while waiting for reinforcements. From a positioning standpoint, Nadeau is willing to weave through traffic to create separation for his line mates without being whistled for interference shows a young man in tune with the concept of time and space. Olivier’s smarts may be his greatest asset. He is rarely caught on the wrong side of the puck, uses angles to his advantage, and is a dependable set-up man who will spot the open teammate.