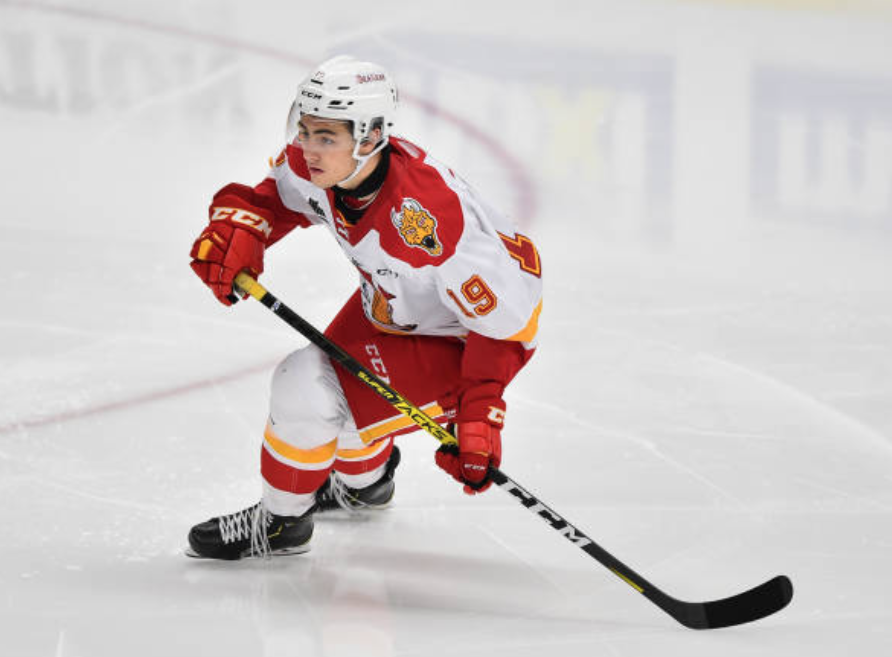 Elliot was drafted by Baie-Comeau in the second round of the 2019 QMJHL Draft but was traded to Charlottetown midway through last season. He has yet to reach the production expected of a forward prospect who was considered one of the better Maritime-born wingers from the 2003 birth year, but he has contributed in a defense-oriented role as a checker and pest with noticeable efforts on the penalty kill. Still, Elliot can go through long stretches without producing points or generated offense on his own. The Islanders at press time own the QMJHL’s best record and are top five in both penalty killing and goals against.

Elliott is a powerful skater with deceptive speed and a bit of a short, railroad stride. The deception is that he doesn’t appear to be fast or explode within the first few steps, but Elliot quickly builds up speed and is able to blow by defenders with ease. Being strong on his edges and escaping from tight areas or avoiding traffic allows Elliott to forecheck with speed. He is extremely strong on his skates from a balance standpoint, and he’s tough to knock off the puck, especially when he drives the net with force. A solid stickhandler, Elliot prefers to keep it simple and usually stays within himself but will surprise you with an occasional dangle or a toe drag. Nonetheless, flashy and fancy play appears to be an afterthought within his approach.

Elliott has a deadly quick and accurate shot. You’ll rarely find him in advantageous game situations to display this skill on a regular basis, mostly because the slanders rely on notable veterans up front and do not use Elliot on the power play. Still, his playmaking skills are solid when he gets to use them. Elliot is a low-maintenance forward who uses whatever time or space is available to make a play. He seems to process the play quickly but usually opts for the direct or safe play. Another factor in his low-risk approach is how he constantly is playing with different line mates. Although he rarely wows you with one specific puck skill, Elliot makes up for it by leading by example and delivering momentum-changing shifts without the puck touching his blade.,

Elliott is strong defensively and is used extensively on the penalty kill and in crunch time situations. He is adept at surveying the landscape and using his stick to disrupt passing lanes. Elliott uses his smarts to remain on the right side of the puck and the opposing defender, making him difficult to mark. Additional noticeable aspects of his off-the-puck game are his compete level and passion. Elliot combines a strong skill set with the willingness to do anything to win and support his teammates. If there’s a post-whistle scrum, chances are Elliott either started the fracas or is standing up for someone. He is tough, strong, and has a honey badger mentality.

Elliott is an extremely smart player who is aware of game situations and where his line mates are on the ice. He is an outstanding penalty killer, using his high IQ, speed, and tenacity to not only occupy the critical lanes but also is a threat to initiate a counterattack. Elliot makes the correct reads and decisions in all areas on the ice, and he seems to know when to jump into the forecheck, or to sit back in the neutral zone. He plays like a young man with a firm understanding of the game, the direction the puck is traveling, and where he needs to position himself to impact a given shift.