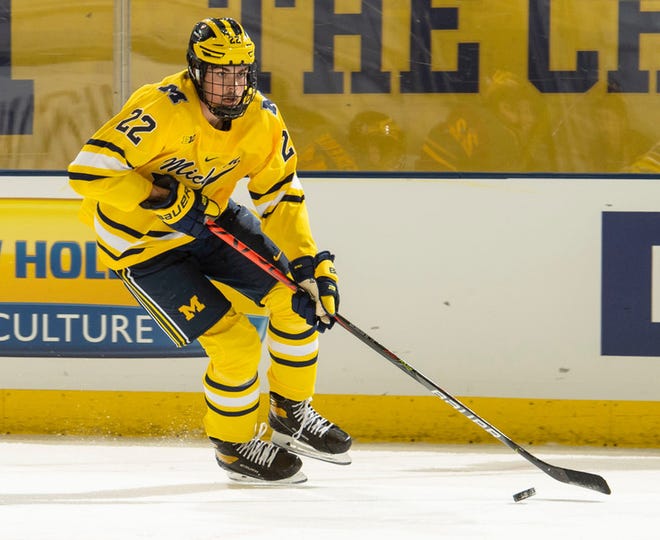 Power is the top freshman defenseman in all of college hockey, let alone among first-year draft eligibles. Although this draft is loaded with two-way defensemen, Power has done more than required to separate himself from the pack. He’s already been nominated for Hobey Baker consideration and would be Michigan’s undisputed No. 1 blueliner had 2019 first-round pick Cam York joined the Philadelphia Flyers. Power is paired regularly with undersized junior puck rusher Nick Blankenburg, and the duo is one of most formidable in all of Division I hockey.

Through late-February, Power was leading all freshman blueliners in scoring with 14 points (3 goals, 11 assists) in 18 games. Eight of his 10 helpers were primary (five at 5v5) and three were involved in goals that gave Michigan the lead. In terms of shot volume, Power went from only seven in his first seven games to 25 over the next 13, including five outings with three shots or more. He’s seeing significant time on both special teams and it’s safe to say he’s playing over 20 minutes a match.

Power is an excellent skater in all directions for a defender of any size. The fact that he’s 6-foot-5 adds additional problems to opponents trying to knock him off the puck, but the truth is that Power can be both graceful and nimble while motoring up ice at top speed. His movements are fluid and pivots are effortless, and Power’s first step in any direction seems to catch opponent’s by surprise. What shouldn’t come as a shock is his exceptional balance, as Power can lug the puck up ice with a body or two draped over his back. The puck is on his stick a lot during a given game but intense pressure or a physical forecheck never seem to faze him. Power can put the perfect touch on any pass over any distance in any situation.

Power spends a lot of time below the circles and is willing to hover around the net. He uses a hard, low slapper or quick, heavy wrister from the high point, and Michigan has several set plays involving a one-timer or give-and-go for a direct route to the net. Power definitely is not a fire-and-forget shooter who unloads every chance he gets, but goalies know they’re in for a challenge when he’s about to tee one up. Even when he’s off target, you get the sense that those shots were not intended to score but rather to create disarray in the low slot and crease area. His head is always up and Power’s got a quick-strike mentality when looking for a pass option down low. The timing and precision of Power’s passes have combined for several highlight-reel setups, and he can do so on either forehand or backhand. His first pass is clean and on the tape.

Power’s impact on his side of the red line is driven by his smarts. Every opposing rush is situational dependent, meaning he’ll go from gapping up tight near his line with an extended stick to affording a puck carrier plenty room upon entry. His reach and footwork are obvious assets, and he already has the reputation of a defender who won’t get beaten inside or out without a serious fight. On several occasions, Power against an entry would be backed in to the top of left circle, only to close rapidly and eliminate the threat away from the middle of the ice and into the boards. He’s used on the penalty kill and utilizes his size and stick to impact both strong and weak sides without getting in the goalie’s way. He’s more of a hard shover than an open-ice hitter but Power finishes his checks and delivers successive firm crosschecks to an opponent’s back. Power will stand up for teammates during scrums.

Power has an exceptional hockey mind for a defenseman and has revealed his high IQ multiple times in one shift, both on and off the puck. There is no way to prepare for him off of faceoffs because he picks and chooses when to activate or when to occupy/cover a high-danger area in either the attacking or defensive zone. Power reads a forecheck as well as any young defenseman we’ve seen and knows exactly how and where to make himself available for his partner. He joins a ton of rushes, steps up into the neutral zone to break up plays, and shows timely releases from chasing to re-occupy the slot. Power’s head always remains on a swivel and he’ll shoulder check several times before making a decision. There isn’t a shred of indecisiveness in Power’s puck carrying or puck handling. With all his jukes, look-offs, and head fakes you’d think Power was a flashy point guard but there are no unnecessary theatrics or selfishness to his game.

Top-pairing, franchise-caliber defenseman for all situations. He’s going to be a good one.

I’ll be talking about a dozen or so #2021NHLDraft prospects today, including this gem (#22 White) who will be my No. 1 on the next ranking.

Spot the critical moment that I was looking for in this clip, and you win a free copy of my 2021 NHL Draft Report (when it’s released). pic.twitter.com/zP2ESY83rP