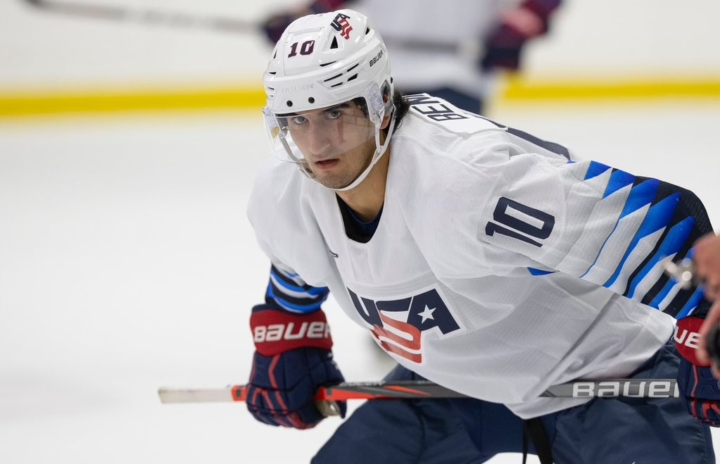 Beniers has been a featured prospect in U.S. hockey circles for several years and for good reason — he continues to earn promotion after promotion while solidifying his reputation as one of the hardest workers you’ll ever find at any level. He produced two successful seasons with the NTDP, including a bump up to the vaunted 2001 group (Jack Hughes, Trevor Zegras, Alex Turcotte, et al.) as a 16-year-old for the 2019 under-18 world championship and then serving as a top-six player for the 2019-20 NTDP. His initial NCAA commitment to Harvard was reversed in favor of Michigan after the ECAC suspended team sports in the wake of the pandemic, and the Wolverines couldn’t be happier — through Feb. 26, Beniers is tied for seventh among freshman with a 0.88 points-per-game average (16 points in 18 games), but nine of the 16 were primary points at 5v5. He’s also made significant improvements at the faceoff circle, winning 55 percent of his last 100 draws. Critical to his numbers was that he started out as the fourth-line center and is now firmly entrenched in the top six.

The leading entry on his pre-draft resume, however,  was Berniers’ performance for Team USA at the 2021 under-20 world junior hockey championship, where he quickly went from depth-line consideration to a solidified role as the No. 2 center between wingers Matt Boldy and Cole Caufield. Not only did the Americans win gold, but Beniers’ work on the penalty kill and in late/close moments proved to be invaluable. Not surprisingly, it was after the tournament when many evaluators scurried to drive him up in the rankings (a tournament he produced only three points in seven games, mind you). Clearly, the young man’s efforts both on and off the puck were noticed.

Beniers is a powerful and perfectly-balanced skater whose acceleration and violent stride can intimidate opponents at their own line. His style is a bit hunched and wide-based but the kid gets to top speed in only a few scraping steps. There is absolutely zero hesitation in his decision making once the puck is on his stick, and Beniers is more than capable of covering up in his own end before blasting through the neutral zone and into prime opposing real estate. His cutbacks are incredibly pronounced — if you blinked and missed the plume of ice shavings, you would have at least heard it. Basically, go look up the word “escapability” in the scout dictionary and you’ll find an image of Beniers with disheveled opponents in the background, as if they got hit by a twister. Puck possession, specifically the cycle game and keeping the puck down low, is a hallmark of Beniers’ game.

Beniers has a nasty shot and quick release but he doesn’t use it as often as he should. Part of the reasoning is either his selflessness or willingness to go to the dirty areas in order to open up room for his wingers. With Michigan, we’re seeing his shot used more off of set plays, and his above-average accuracy has helped create second chances near the net.  Beniers seems more comfortable with his forehand than backhand but his hands are quick enough to convert in tight areas with either side of his blade. His shooting percentage over his three combined seasons since 2018-19 is an impressive 18 percent (42 goals on 234 shots). As far as playmaking, Beniers is a highly-accurate passer no matter the distance, and the timing of his leads or outlets come in handy when assisting defensemen during breakouts. He’s also shown the ability to create bang-bang chances off the cycle or wall battle, and through traffic no less. His primary assists are most certainly earned, and on occasion he’ll pull off passes of the no-look or behind-the-back variety.

Beniers is the best two-way forward in the draft for several reasons. He has been highly effective when used in late/close situations his entire junior career. Whether it’s on the penalty kill or protecting a lead with the opposing net empty, Beniers is exactly the type of center you want on the ice — relentless puck pursuit; heavy hitting within the rule book; and a willingness to sacrifice his body. He’s always starting and stopping between the weak and strong sides, and rarely will you find him out of position or blowing coverage. If you want to teach young kids on the importance of backchecking and what it should look like the second possession changes, have them sneak a peak at Beniers, who routinely buries his chin into his chest and pressures opponents with all his strength and energy. His faceoff success rate, once a point of contention for being in the high-30/low-40 percent range, seems to have been rectified, as was stated in the opening. Another prominent feature of Beniers’ play away from the puck is his ability to marry assertiveness with discipline — he hasn’t been whistled for a single penalty this season.

Beniers gets it, simple as that. It’s easy to label a kid a having a low ceiling because he excels on the defensive side, but Beniers doesn’t need to be coached all that much. He simply knows when to pick his spots rather than keep the spotlight on him while ignoring his linemates. Beniers is very mature for his age, not just for the way he carries himself on the ice but also for his team-first mindset and the energy he brings to the bench. Naturally, you cannot excel as a two-way forward without making consistent reads, anticipating gaps, or juggling multiple options in a second or two. Therefore, Beniers’ decision making should never be questioned for strategic approach he brings every shift.

Top-line, all-situations center who delivers in the clutch. Beniers’ skill set is very similar to what we saw from Jonathan Toews in his 2005-06 draft year