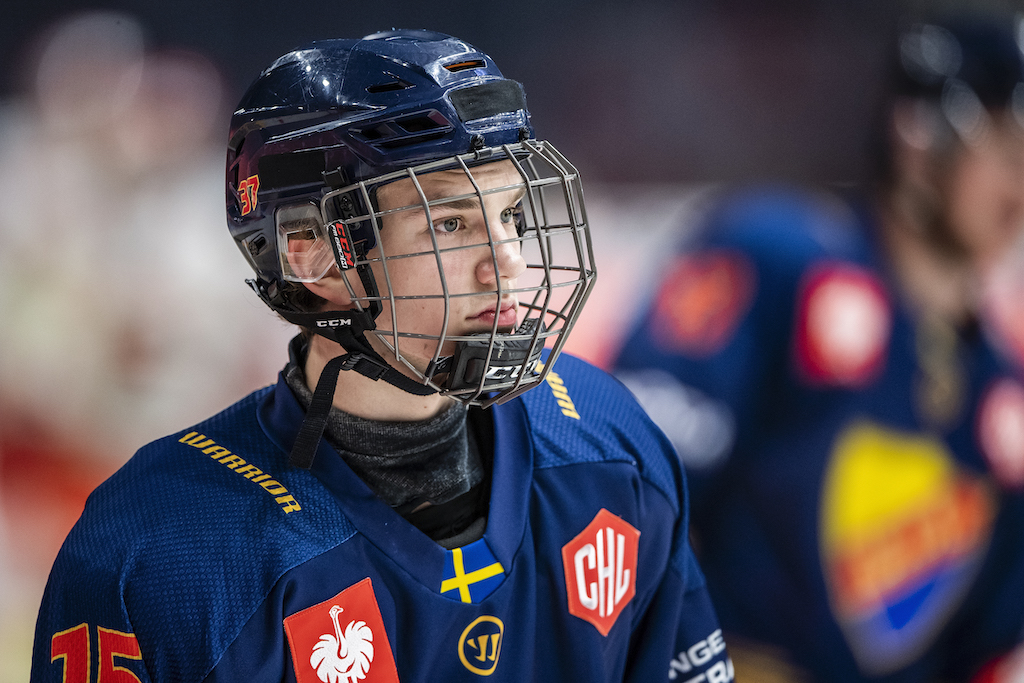 Eklund was a kid whose name rang bells for several years thanks to standout performances at 2019 Ivan Hlinka and during last season’s J20 Superelit Norra, where he finished fourth in scoring (29 points in 24 games). Now that he’s a full-time SHL’er with Djugardens, Eklund is blowing past the draft-year production of several notable Swedish Leaguers, namely 2020 top-10 picks Lucas Raymond and Alexander Holtz. With 19 points (10 goals, 9 assists) in his first 35 games, Eklund’s 0.54 points-per-game average is pacing to be with highest by an SHL first-year draft eligible since 2012-13, when Elias Lindholm (No. 5 overall in 2013 draft) netted 0.63 points a contest with Brynas.

Eklund is an electrifying talent who personifies clutch play, timeliness, and excitability. Although he plays on a line with highly-touted prospect like Holtz, Eklund has proven time and again he can dictate tempo on his own. Sixteen of his 19 points in Sweden’s elite SHL are primary, and 75 percent of his total production are from goals that either tied the score or gave Djugardens the lead. He’s also a disciplined player (only one minor on the season), and Eklund averages over six shots per 60 minutes.

Eklund has very good speed and weavability, as he is far more east-west than he is north-south. Eklund’s agility is off the charts so playing him tight can be a recipe for humiliation. He’s not an explosive skater from a straight-line standpoint but you’ll mark Eklund in open ice several times a period, let alone throughout the game. He’ll use stutter steps, quick shoulder drops, or spin moves to gain the inside edge, and more times than not he’s beating that defender to the inside post. Eklund’s a high-motor forward who will put forth maximum effort at the end of shifts.

One of the greatest strengths Eklund possesses is his ability to enter the zone under complete control regardless of speed or coverage. An underrated aspect of Eklund’s skater is his balance — he rarely gets knocked off the puck and will snap back up the few times it happens.

Calling Eklund anything short of a puck wizard would be borderline insulting. He’s the most talented of any draft-eligible forward in terms of pure puck skills and there isn’t a situation or coverage that has proven to limit his creativity. There’s simply no way to prepare for him as he can be as dangerous from the top of the right circle as he is behind the net or along the goal line. Eklund keeps his feet moving constantly and playing with a sniper like Holtz allows him to exploit defenses that may cheat towards the weak side out of fear of a one-timer. It is in similar situations when Eklund displays both the brilliance of his vision and ingenuity — he uses several features within offensive zone to create chances, to include the boards, the back of the net, etc.

Eklund is a multi-faceted goal scorer and open-ice threat. He can beat you with a slapper off the pass or hit his short-side targets with wristers from in close or sharp angles. Eklund also is incredibly dangerous near the goal and his confidence under the pressure of a collapsing slot or slot area doesn’t force him into rushed attempts. He’s been used at the point on the power play at every level.

Eklund fits into the category of skilled point producers who actually care about their play off the puck. He’s not a stopper or checker in the classic sense, and neither is he used on the penalty kill. But Eklund can be a tenacious forechecker who is willing to throw his weight around below the goal line or in the corners. He’s also attentive with an active stick while in the defensive zone, plugging gaps in the danger areas and shoulder-checking the points for a potential backdoor play. He also has an abrasive side and will mix it up with older forwards after the whistle.

Eklund has a sharp hockey mind. His anticipation and awareness are at the highest levels for a teenager, and most of his better scoring chances are byproducts of beating an opponent to a spot or exploiting a gap as it opens. The timing of his passes under pressure are near perfect, and Eklund seems to factor in the speed on an oncoming opponent when deciding the perfect time to release the trigger on a dump-in, lead pass, or high flip. He’s also quite disciplined for a player who performs at such a high energy level.

Top-line winger, point producer, and power-play specialist. A Mitch Marner-Nikolaj Ehlers hybrid who can be both a sniper and a set-up man.

One question to ask is how can William Eklund be ranked below Edvinsson when Eklund was dominant at the tougher tournament (Hlinka) and crushing the SHL as the leading rookie when Edvinsson can't crack Frolunda's lineup? Djugarden smoked Frolunda 5-1 today BTW, Peep the slap pass pic.twitter.com/VqwW9A2rRX