NASHVILLE (The Draft Analyst) — The first quarter of this non-standard NHL season, for the most part, is now complete. Almost 85 percent of teams involved in this shortened 56-game campaign have played at least 14 games — a point of the season which under the traditional 82-game schedule would put us somewhere around mid-November. It therefore becomes a bit easier to sharpen our outlook on which clubs have the best chance at contending for the 2020-21 Stanley Cup.

Unsurprisingly, nearly all of last year’s top contenders have begun the process of separating themselves from the doormats and bubble teams, with the middling Pittsburgh Penguins the lone exception. Eight of the top nine finishers in points percentage in 2019-20 are currently ranked among the leading 11 or 12 teams, led by the likes of the Boston Bruins, Tampa Bay Lightning, Colorado Avalanche, and Vegas Golden Knights.

There are a few exceptions, however, beginning with fast starts from the Florida Panthers (10-2-2 through Feb. 18), Toronto Maple Leafs (13-3-2) and the Montreal Canadiens (9-4-2). And although the Maple Leafs have the league’s best record, they play in a weak Canadian Division that doesn’t feature a single team from last year’s conference finals nor one that finished in the top 10 in 2019-20 points percentage. Therefore, neither Toronto, nor any team playing north of the border for that matter, will be considered a top contender for the Stanley Cup until much deeper into the season.

The surprise team that has entered the title conversation is Florida, who this week helped legitimize their place among the powerhouses by taking two of three straight games from the defending-champion Lightning and later downing a red-hot Carolina Hurricanes squad in overtime. The Panthers crack our latest top five, bumping off the COVID-hit Philadelphia Flyers from our preseason list. 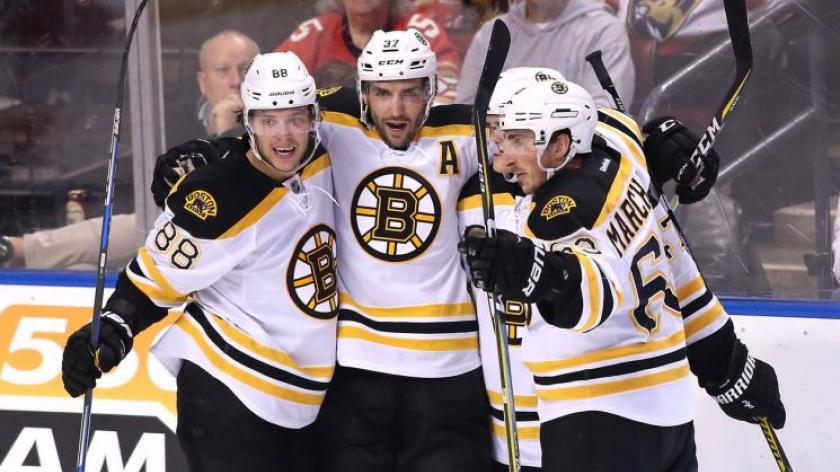 The more fun the Bruins have at the rink, the more their reputation grows as one of the NHL’s toughest outs. Although they dropped two straight after rolling to a 9-0-1 stretch, Boston already is in midseason form and surged to the top of the tough East Division thanks to its winning of all three games against Philadelphia. It has been far from easy, however, as 11 of the B’s first 14 games were decided by one goal, including seven that went to overtime. But if occupying the critical piece of real estate atop the East is the primary objective, how they got there become less relevant.

As dominant as the Perfection Line of Brad Marchand (T-12th in scoring), Patrice Bergeron (T-12th in scoring), and David Pastrnak (17th in points/60) has been, the Bruins’ achieving success in multiple areas has been driven by a shared effort on special teams, highlighted by the league’s stingiest penalty kill. Their next two games will be against Philadelphia and the Islanders — both who trail Boston by three points for first place. The Bruins are favored over the Flyers in their next game, edging the predicted scoreline by at least one point. 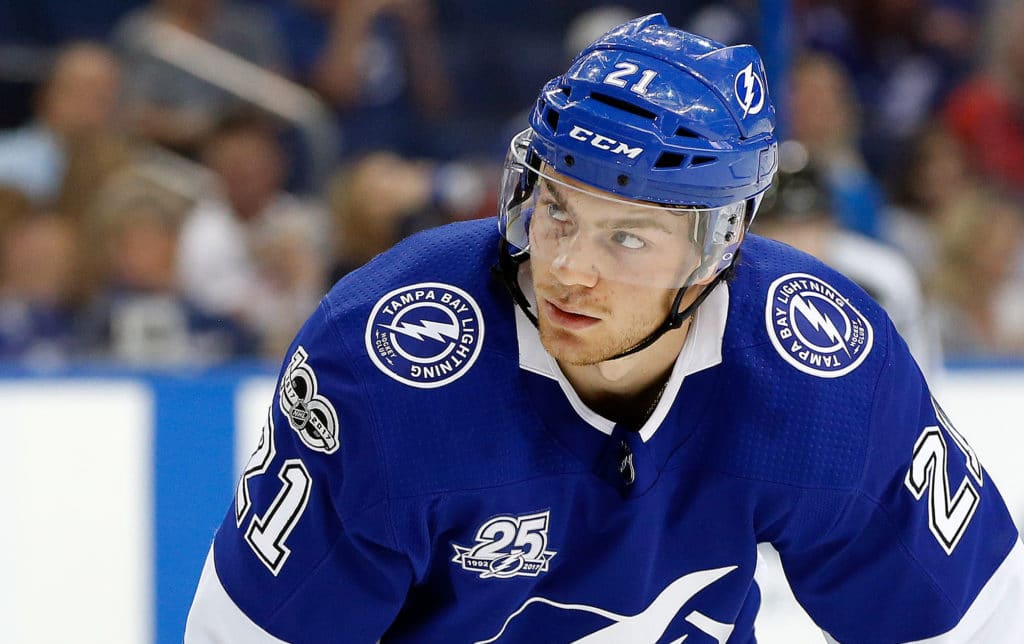 The Bolts had a similar streak of dominance end abruptly this week, but the reigning champions are clicking in every department and should remain one of the league’s most feared opponents for the rest of the regular season and into the playoffs. Playing in a new division hasn’t slowed them down, but they had to play a pair of games against the rival Panthers without captain Steven Stamkos (15 points in 12 games). Tampa eventually earned a split while Stamkos was out with a lower-body injury, but he returned in the rubber match on Feb. 15 and opened the scoring (plus over 22 minutes of ice time) in a 6-4 loss.

The loss of star Nikita Kucherov for the season before play even started doesn’t appear to have hurt Tampa’s reputation for scoring in bunches. The still own the league’s most deadly attack and have scored four goals or more in nine of their first 14 games (and won by three goals or more in seven). Eleven Lightning have scored at least three goals this season (by comparison, Boston has five), including top scorer Brayden Point (16 points in 14 games), while Victor Hedman is second in the NHL in defense scoring with 15 points. Still, Florida and Carolina have already let it be known that they are both willing and able to go blow for blow with Tampa for the division title. 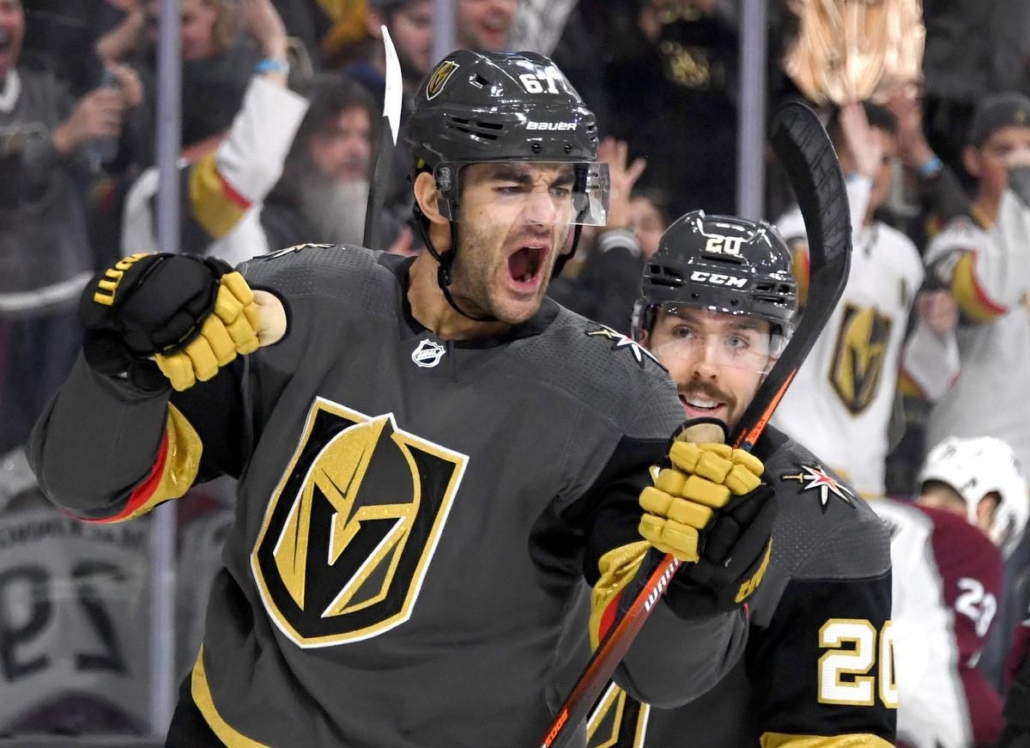 Tampa may own the league’s most productive offense, but Vegas keep the ice tilted like nobody else. Seventy percent of both total scoring chances and high-danger scoring opportunities in a given game are created by the Golden Knights, and they’ve outshot their opponent in 11 of the 14 matches. Their middle-of-the-pack offense would be the lowest in the team’s four-year history, but their 2.14 goals allowed per game would be the best. They’re going to need it during this ongoing four-game set with contending Colorado, with each team coming away with a one-goal victory thus far.

Goalie Marc-Andre Fleury has seen the bulk of the action in net. Through Thursday, the 36-year-old was one of the league’s best during 5-on-5 in save percentage (.941), high-danger save percentage (.870), and Goals Saved Above Average (+6.7o). The Knights don’t have anyone in the top 15 in scoring, but wingers Mark Stone (16 points) and Max Pacioretty (13 points) are two of six Vegas skaters who are in double digits in points on the season. 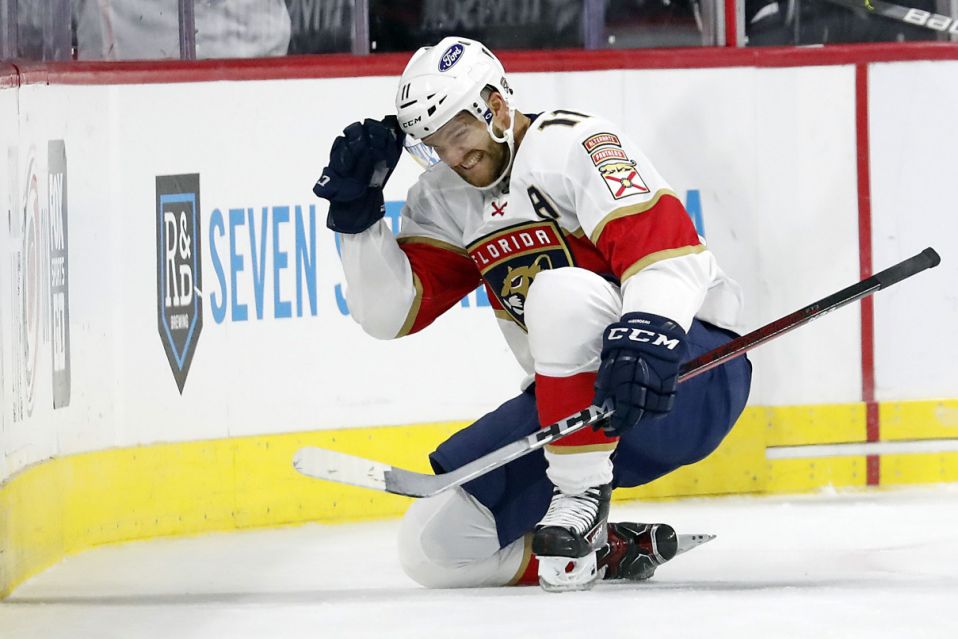 The Panthers had a busy offseason that included bringing in general manager Bill Zito and trading for Cup-winner Patrick Hornqvist. But the key for Florida’s resurgence has been the play of left wing Jonathan Huberdeau, who is among the league’s top scorers with 20 points in his first 14 games. On Wednesday, Huberdeau capped a three-point effort (2 goals, 1 assist) with the overtime winner to beat Carolina. Although their shot suppression isn’t very becoming for a title hopeful (Panthers rank 20th in shots against), the play in goal of starter Sergei Bobrovsky and unheralded Chris Driedger (5-1-1 as Bobrovsky’s backup) has helped offset any disadvantages in territorial play. Not only is the the 26-year-old Driedger a combined 12-3-2 in his two years with Florida, but he is sixth in the league with 12.51 expected goals against (one expected goal for every 12.51 opposing shots).

The Cats this weekend get a bit of a breather schedule-wise by playing a two-game set against the last-place Detroit Red Wings before embarking on a tough five game stretch at home that includes three straight versus the 2020 Stanley Cup runner-up Dallas Stars followed by two more with the Hurricanes. 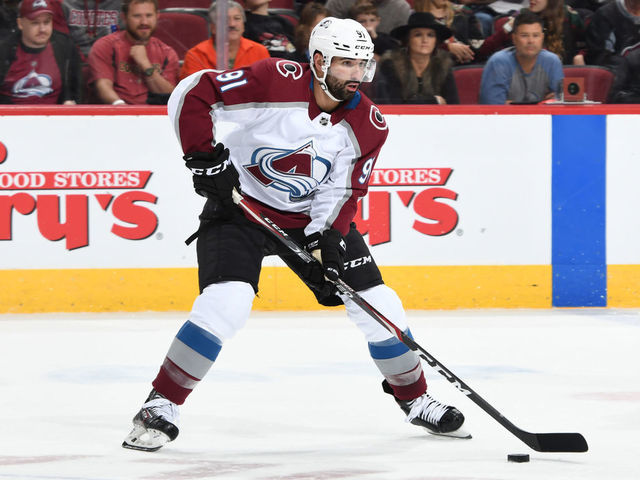 Defense and goaltending have helped Colorado own the league’s ninth-best points percentage and the club’s 8.6 expected goals against at 5-on-5 ranked second in the NHL behind Dallas (7.0). They’ve split each of their two games against contenders St. Louis and Vegas and have four games in hand on the first-place Blues, who lead the Avalanche by five points heading into Friday’s action. Why is that important? Because the West winner likely avoids a first-round matchup with a contender and faces either Arizona or one of the California teams instead.

Nathan MacKinnon leads the team in scoring with 15 points in 12 games but his 5-on-5 rates have been among the best in the league. MacKinnon leads the NHL with 2.30 primary assists per 60 minutes and he’s fourth in points-per-60 (2.97) among forwards who play at least 15 minutes a game at 5-on-5. Colorado’s record may not look as gaudy as several clubs that were not included in this ranking, but they are a hungry and playoff-tested group that when healthy boasts one of the NHL’s most formidable lineups.

The last comment and 3 other comment(s) need to be approved.
0 replies