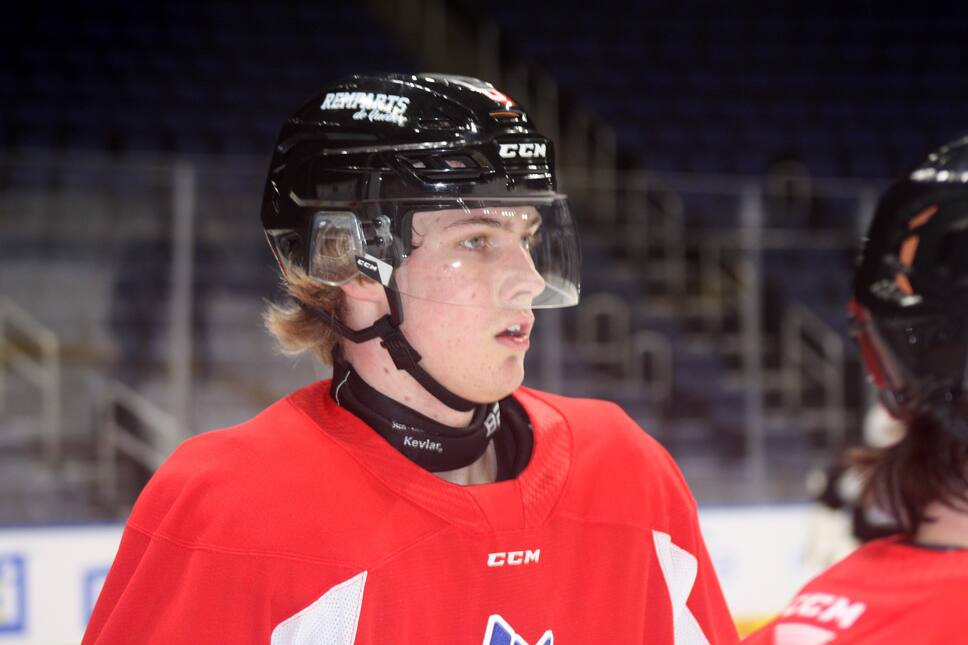 Siivonen was selected 74th overall pick by the Quebec Remparts in the 2020 CHL Import Draft after he spent most of the season prior with Lukko U20 in Finland’s SM-Sarja. With Lukko, Siivonen was a middle-pairing defender who played either side and saw more time on the penalty kill than he did on the power play, averaging close to 16 mins a game overall. He wasn’t always with the main junior squad, as Siivonen also spent time with the “B” team. It should be noted that Lukko in 2019-20 was not a playoff team and had one of the weaker offenses, but Siivonen was a critical piece on one of the better penalty-killing units in the league.

Siivonen didn’t join the Remparts until mid-October due to COVID protocols and finally made his QMJHL debut on Nov. 17. He’s bounced around from pairing to pairing, and much like in Finland, Siivonen plays a role on a premier penalty-killing unit. He hurt his shoulder in early February and missed a full month, yet has played in only five of Quebec’s nine games since returning on Match 4.

Siivonen is a mobile defenseman who is constantly in motion and rarely is caught flatfooted. Although he is a larger prospect, Siivonen is capable of taking the puck for a skate into the neutral zone and uses a wide, sturdy base to help fend off checkers and maintain position. Siivonen will never be labeled as a roadrunner, nor will he attempt highlight reel with end-to-end rushes. He does, however, display excellent timing and fluidity while maintaining a tight gap, and also is quick with his retrievals. His straight-line speed for a defender his size is above average.

Siivonen isn’t much of a puck handler but he does have soft hands to handle hard d-to-d passes from within short distances. He opts for the outlet pass or close proximity with his partner to move the puck up ice. Siivonen in his own end keeps things relatively simple and avoids throwing the puck blindly into the middle of the ice.

Siivonen has a hard, accurate shot that he simply doesn’t use enough. He stays active in the offensive zone and drops down on occasion but he also walks the line to create an opening for a quick attempt at the net. Siivonen has yet to score a goal in the QMJHL but both his goals last season in the SM-Sarja were via the wrister. Siivonen isn’t much of a playmaker and usually connects with the closest passing option. He always has his head up, looking for the open man, but more times than not he will opt for the smart, safe play. Although he becomes more daring and creative once inside the offensive zone — especially if he drops down below the faceoff dot — Siivonen is predominately a low-risk passer.

As stated throughout, Siivonen is a steady and sound left-handed defenseman who can play either side, although he has played far more on the right than left. He uses his large frame to provide his goalie clear views of shots but is quick to the corners and also willing to battle in front. Siivonen leans on opponents, wearing them down and also showing a nasty side with hard shoves and stick work if necessary. He competes for position in the slot and also for loose pucks in all areas below the hash marks. While battling for pucks, Siivonen is willing to get his hands dirty and isn’t much for reaching while staying on the periphery. He moves opponents with authority and is dogged in his desire to secure the puck. Siivonen stays close to the slot and will not run around senselessly to make a hit. He is a reliable, steady rearguard who possesses a strong grasp of game scenarios.

Siivonen’s hockey IQ is very underrated. He understands all game situations; such as where and when to be positionally. His gap control and neutral-zone reads are timely and effective. Siivonen nullifies opposing rushes by reading and anticipating the play, and he will either blow up the opponent with a huge hit or disrupt the play with a quick stick. His hits are calculated. He will not throw a hit and take himself out of position. His physical play is done with a purpose. Naturally, his high IQ translates into smart decisions. His pinches are smart and do not leave his partner facing odd man rushes. Siivonen is poised and will not rush a pass up the middle, thereby risking a turnover. Simply a sound defenseman —  no flash and with little to no risk.