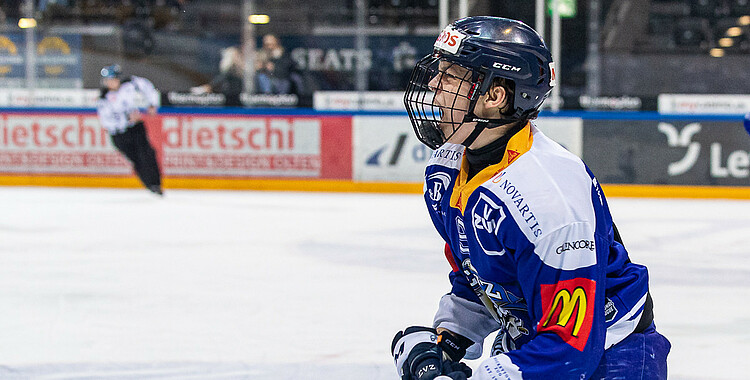 Season Review
One of the top 2003-born draft prospects to come out of Switzerland for this year’s draft, Biasca is a versatile two-way forward who joined Halifax in January after he played for the Swiss at the under-20 world junior hockey championship. He was selected fifth overall in the 2020 CHL Import Draft after serving as Zug U20’s second-line center and placing second in team scoring with 17 goals and 12 assists in 34 games.

Biasca’s season has been marked by inconsistent play and injury after he had a successful first half of 2020-21 playing in Switzerland. He and his Swiss teammates were routinely humbled at the world juniors and were usually on the wrong end of a lopsided score. With the Mooseheads, Biasca has served in a middle-six role with time on both the power play and penalty kill, but through April 10 had managed only one goal and seven points with 23 shots in 17 games. He hurt his knee at the world juniors in early January and then was out of the Halifax lineup with a lower-body injury for over a month before he returned on March 25.

Biasca is an efficient, effortless skater with average speed who quickly chews up ice.  This enables him to be effective on the forecheck and backcheck where opponents are duped into believing they have more time and space than they have. Biasca has a thick frame but is shifty and agile. He uses his edges and change of pace to lure opponents into a false sense of security. Once he notices his foe relax, Biasca will dip his shoulder and burst to the outside. His stickhandling is a strength. Combined with his skating it leads to a lethal combination in either open ice or in tight spaces. Some players slow down when handling the puck, but Biasca can pull off a variety of inside-out moves while moving at top speed. He handles the puck equally well at any speed to help present him with several pass options to choose from.

Armed with a quick, accurate release for a heavy wrister, Biasca can be a force in the offensive zone. He often positions himself for the one-time shot but does not limit himself to just one area. He constantly moves around looking for space while also drawing attention and opening space for others. The Mooseheads’ power play is inexplicably putrid this season when you consider the firepower they boast up front. Biasca during the man advantage usually is stationed near or in the right circle for the one-timer or in the bumper position.

Biasca is extremely creative offensively and his presence in the bumper position permits his to display this skill. He uses his smarts to create plays off the rush and on the power play. Having a strong shot allows him to exploit openings or space, and he is quite consistent with the accuracy and timing of his lead or drop passes to a breaking forward or late trailer entering the zone. Being new to the squad with various line combinations has hindered his creativity to a degree, however, and his game with Halifax has been more simple and safe than it was in Swiss juniors.

Biasca’s play off the puck during his time in the QMJHL has been average, as he continues to find his way in his new surroundings and acclimating himself with a new system and teammates. Defense, however, begins in the offensive zone and Biasca knows his responsibilities. If he is not one of the first two on the forecheck, he knows to stay high, patrolling the slot and middle of the ice. Sometimes Biasca will get lost in his own zone, but Halifax has had defensive zone issues all season.

Biasca competes hard and does not back away from scrums or puck battles. He will not be seen putting his stick in a pile to free a puck. Instead, he uses his body and fights for it. Much like his role with Zug U20, Biascsa is used on the penalty kill and is effective when down a man. He’s averaging at least 16 faceoffs a game with a 46.6 winning percentage. He is smart, gets his stick in passing lanes, and has his head on a swivel, yet his desire to block shots could stand to improve.

Smart decisions and a strong hockey IQ are hallmarks of Biasca’s game. Keenly aware of the location of friend and foe, Biasca’s quick wits enable him to make quick plays without delaying and eventually finding an open outlet. If the play is not there, he rarely forces it and will opt for a simple chip or dump-in. Biasca also makes simple decisions in both the defensive and neutral zones. and he rarely attempts the risky play. Although he is more daring in the offensive zone with his creativity and decisions, Biasca’s shot attempts are generally sound and he rarely settles for low-percentage chances.