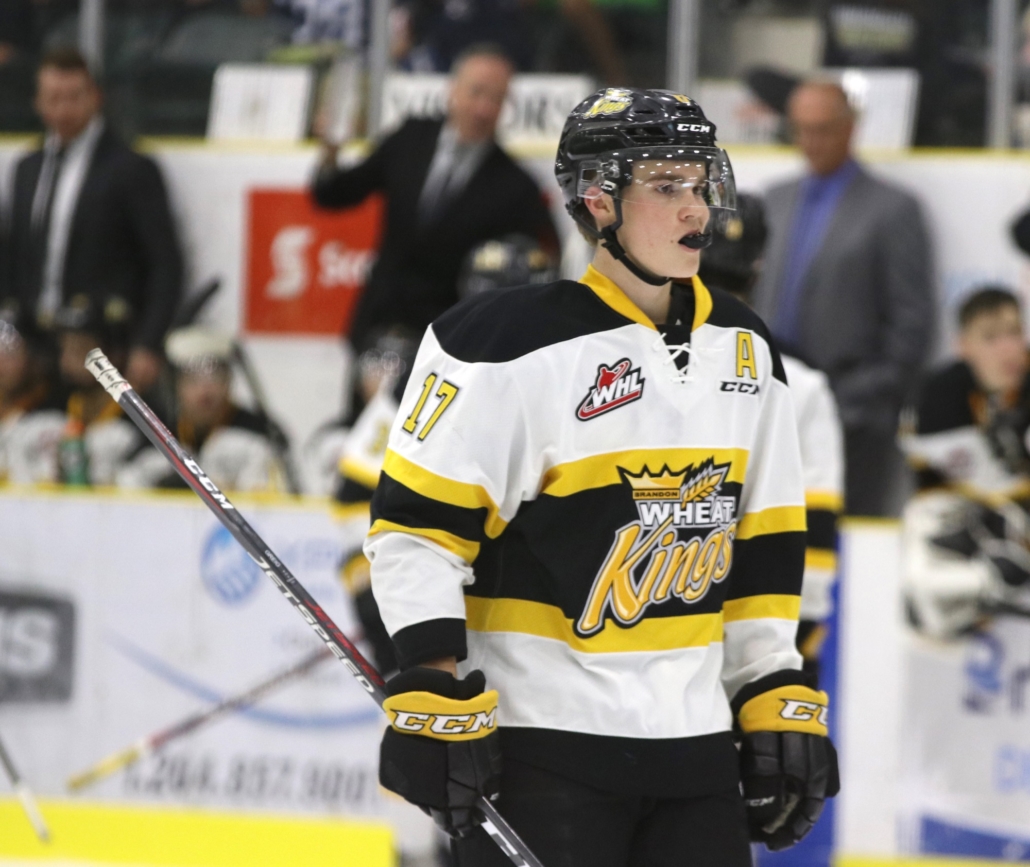 Greig is a speedy two-way center who comes from a hockey family, as his father Mark was a prolific WHL scorer for Lethbridge in the 1980s and now scouts for the Philadelphia Flyers. Ridly didn’t have the benefit of playing in a high-scoring era like his pops, but he shares a lot of the similarities that made Mark a first-round pick of the Hartford Whalers in 1990. He has very good speed and excellent acceleration, but also competes hard and is willing to make sacrifices for his linemates. Although Greig barely cracked the top 40 in WHL scoring and almost half of his 60 points came on the power play, he’s had so many moments revealing high-end skill that you can justify drafting him in the middle of the first round.

Greig worked his way up Brandon’s lineup to eventually center the top line, with wings like veterans Connor Gutenberg and Cole Reinhardt seeing most of the time on his flanks. He also centered the top power play unit and lead group on the penalty kill, with Greig leading the latter to a PK percentage of 85.8, which was second in the WHL.

Speed and applying pressure are two aspects that remained consistent throughout Greig’s draft season, which included impressive performances at the 2019 Ivan Hlinka tournament and the 2020 CHL Top Prospects game. He is a possession driver who anticipates extremely well but has the stickhandling abilities and vision to create scoring chances out of seemingly harmless board battles. Far from a puck hog, Greig knows exactly when to use the time and space he created for himself for precision setups or rifle shots at the net.

Greig’s puck skills and decision making on or off the puck are very impressive. He has soft hands and can control the puck in traffic while maintaining situational awareness. For example, he can enter the zone at top speed or delay at the line, and at times he will peel back to the neutral zone to wait for a line change to complete or attempt to lure the opposition away from coverage. Once inside the enemy zone, Greig seems most comfortable operating from the half wall and looking to exploit open lanes with his head up. There’s a significant amount of trickery to his possessions as well, as Greig can fake shot or look-off before hitting the target on goal or a teammate at the back door. Although he has an impressive shot-release and averaged a team-best 3.55 shots a game, it is more likely that Greig makes his mark as a passer more than a shooter. At this point, however, he should be considered a dual threat.

From an intangibles standpoint, all indications are that Greig is a coachable kid with a great attitude who is willing to execute (and excel at) the key tasks necessary for winning hockey games. Of course, being a pain in the neck on the forecheck and delivering several hits that can be interpreted as either borderline or dirty led to some undisciplined play — Greig was second on the Wheat Kings in penalty minutes with 83, which by far was the most among all of the WHL’s top first-year eligible forward prospects. He also has never been strong in the faceoff circle (47 percent for his career). Still, Greig’s game is built for the rigors of the NHL and could be closer to an everyday player than some might think.

This goal didn’t count because of GI, but Ryan Francis with the vision and a nice pass on the backhand in traffic, and Ridly Greig roofs it with the puck in his skates. Reminds me of Tony Amonte on that play. pic.twitter.com/V853vuoi8u