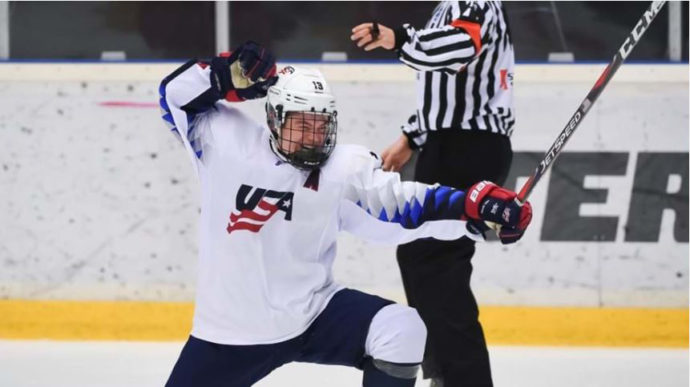 The draft’s most prolific goal scorer has built a reputation as more than just a finisher, so you’ll have to overlook (somewhat) the fact that he tallied an NTDP-record 72 goals, including 27 on the power play. You should also disregard the fact that Caufield is generously listed at 5-foot-7, or that he spent most of his season riding shotgun next to Jack Hughes. If it were 1995 or 2005, Caufield would probably have all those things held against him, regardless if this sniper can be a dangerous inside player who can fill the net and battle his tail off for real estate near the goal. The good news is that smaller players, let alone the type like Caufield that win puck battles, are now allowed (and encouraged) to exploit the common slow-footedness of several NHL teams. Furthermore, Caufield has proven he can score regardless of the line he plays on or where he starts his shifts. To put it simply, Caufield is not just some sniping teenager winger who needs a star center to do the work for him. He fights hard and anticipates puck travel to perfection, which helps him be an effective penalty killer and legitimate threat to score while down a man.

A consistent breakaway threat, Caufield is a premier finisher thanks to his incredibly soft hands, hand-eye coordination and lightning-quick skate-to-stick transition. Caufield is an excellent skater with a devastating change of pace and explosive first step. He is slippery, elusive and possesses very good balance considering his playing weight. Although he’s considered a finisher, Caufield can be a reliable playmaker who passes with accuracy from both his forehand and backhand. His ability to maintain control of the puck while operating at top speed and still have the presence of mind to spot the open backdoor, cutter or trailer is a tribute to his peripheral vision and high hockey IQ.

#U18: USA was already leading 2-0 when both Cole Caufield and Jack Hughes made these sweet passes that almost led to a goal by Michael Gildon. Second period is underway between Team USA and the Czech Republic. pic.twitter.com/NfHOkn2med