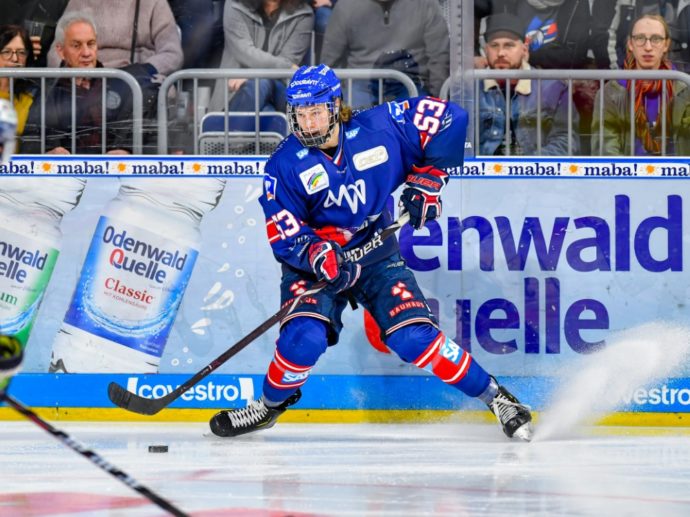 A big, smooth-skating German blueliner with physicality, sound instincts and leadership qualities, Seider, when given the opportunity, has handled a top-four role against adult-age competition with aplomb. His dominant play in all three zones at the IIHF’s first division under-20 world juniors not only led Germany to the title that vaulted them into the top bracket for next year’s tournament, but also reinforced his standing as a first-round quality prospect with legitimate top-pairing potential at the highest level. One of Seider’s most noticeable qualities is how smart he is with or without the puck. Blessed with an acute sense to predict the opponent’s intentions, Seider quickly transitions from standing up at the blue line like a brick wall, to a quick poke and pass that leads his mates to a counterattack. His physicality, reach and quick feet combine to make the majority of 1-on-1 attempts die quickly above the circles. Additionally, Seider will fix a puck carrier into the corner for either a low-percentage centering attempt or a smothering check into the boards. Cross-ice passes originating from the strong side get broken up with regularity, and you can make a strong case for Seider being the best in his draft class at owning and maintaining positioning in the low slot.

Seider’s offensive prowess appears limited, although he has shown confidence and reliability with his puck carrying. You rarely see him painted into a corner, and he uses smart dump-ins or lobs to buy additional time. He likes to join the rush and will venture well into the circles or slot as a trailer. He owns an excellent shot, both for its velocity and accuracy. He isn’t your classic power-play quarterback, but he has soft hands to handle crisp, cross-ice passes and hammer one-timers on net. One thing to keep an eye on are injuries, as Seider missed two sizeable chunks of the schedule due to issues with his shoulder, and also suffered a concussion after being hit from behind at the men’s world championship in May.

#WJC: What a sequence for RHD Moritz Seider (#21 White). Skating obviously isn’t an issue front or back, and how about the instincts to go from defense to offense a second after making a key stop. Shot was pretty good too, lol. pic.twitter.com/BeoO1kiDPw

Orlov definitely sticks his knee out but he's at a standstill. I think if Orlov's in that position 100 times he probably reacts the same way each time, simply based on Ehlers' body positioning. Illegal check deserving of a suspension but don't think it was dirty or premeditated

#MHL: LW Viktor Neuchev (Ranked No. 17) cool as a cucumber as he finishes with the OT winner to lead Avto to a 4-3 win over Sibirskie Snaipery.