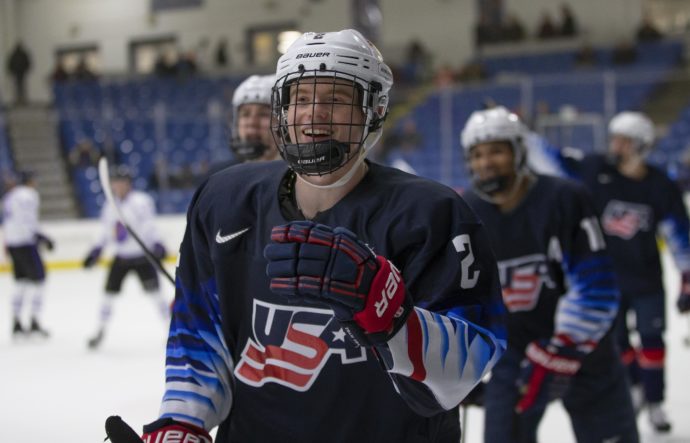 Arguably the purest offensive defenseman available in the draft, York combines speed and finesse to form a package perfectly suited to run the attack for one of the NTDP’s most heralded group of forwards in the program’s history. Finding a way to manage puck distribution with the likes of Jack Hughes, Trevor Zegras, Alex Turcotte, Matthew Boldy and Cole Caufield certainly is no small feat. But York makes it look relatively easy thanks to his impressive skating, vision and puck skills. He is on Team USA’s top pairing and quarterbacks the power play, although most of the time he acquiesces flow and tempo to Hughes. Still, York’s vision and crisp tape-to-tape passing make him an integral part of a machine that churns out scoring chance after scoring chance.

York has an excellent shot, as both his slapper and wrister are released quickly and accurately. He fires pucks on net in one motion, including off his back foot, and you rarely see him hesitate or wait until a lane is completely unobstructed. He keeps his feet moving at all times and looks to sneak in between the hashmarks for a rebound or one timer. To say York is a gambler would be an understatement – he always looks to move the puck deep into opposing territory and will support his forwards along the wall. His overall defensive game is predicated on smart reads and quick feet. York isn’t physical on a consistent basis, but he doesn’t shy away from contact and has thrown big open-ice hits every now and again, plus he battles hard for slot superiority. He does have quick enough feet to close on a puck carrier, but at times he affords them too much room by not standing up at his line.