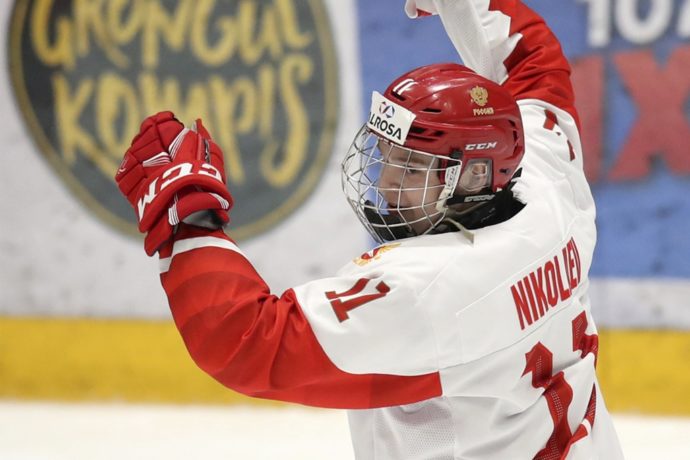 A brick wall of a two-way playmaking center who was Russia’s top-line pivot at all of the under-18 events he participated in, Nikolayev is incredibly strong on his skates and plays with a high compete level. He is consistently the center summoned by his coaches to tackle tough assignments such as late-and-close faceoffs, checking opposing top players or scoring in the clutch. Nikolayev’s stickhandling and puck protection are excellent both on the move or within the cramped confines of a given zone. He can deke and dangle around defenders with relative ease, but he consistently victimizes opponents by dropping that shoulder and barreling towards the net. He is a breakaway threat in open ice; more for his anticipation and hockey sense than elite speed or cherrypicking – remember, this is a dependable two-way center we’re talking about, so his quick transition from defense to offense requires more calculation than what is being processed by the average offensive forward who floats his way into chances. Nikolayev plays with physicality and intensity while displaying leadership both on and off the ice, and he is an excellent choice to run both the lead power-play unit and top penalty kill.

Blessed with acute vision and creativity, Nikolayev is a tape-to-tape passer and does so with authority. He executes odd-man rushes with precision while not always choosing the expected passing option. He is poised on zone entries and will delay to allow puck support to appear until he sees the open lane he likes. Nikolayev is not an explosive skater nor does he possess a quick first step, but he is agile in every direction and generates a lot of power behind his wide stride. He also is effective in separating from back pressuring and weaving defensive pairs into a state of confusion. He was named the top forward in the MHL playoffs before he was summoned to play for Russia at the U18 worlds.

#U18: Strong balance and the passing skills of C Ilya Nikolayev led to a slam dunk for LHD Semyon Chistyakov, as Russia takes a 2-1 lead over Latvia with under eight minutes left in the second. pic.twitter.com/zt2ZxxznUu