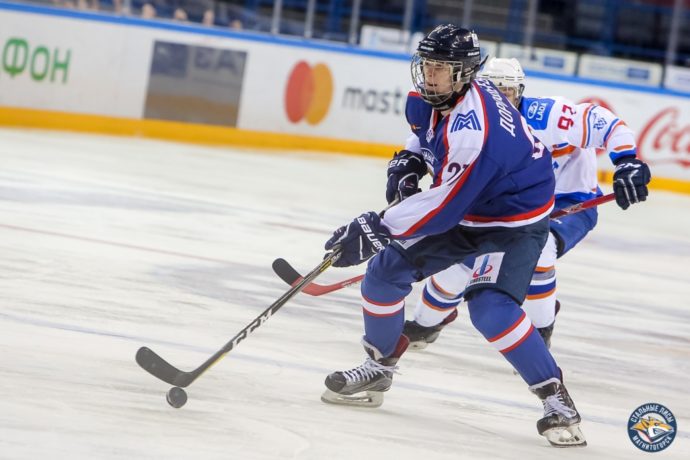 One of the most intelligent dual-threat wingers in his draft class, Dorofeyev was a key cog in Stalnye Lisy’s top line that generated most of their offense at even strength. He can play the role of either playmaker or finisher, and his overall understanding of the game is ridiculously high. Although Dorofeyev is a late birthday who didn’t get the chance to dominate most of his 2019 draft peers in international competitions, he was among the better players in the MHL and earned the notoriously rare KHL promotion, including four valuable playoff games.

Dorofeyev is a graceful skater with above-average speed and the ability to dictate the pace of the game. He has quick feet, stays in constant motion and anticipates extremely well, so it shouldn’t surprise anyone when he slips into openings with the hammer cocked several times a game. On the puck, Dorofeyev is able to stay under complete control whether playing methodical or up-tempo, and there are times when he clearly stands out as the most consistent (and confident) decision-maker in the entire game. He is very strong on his skates and rarely is forced into making rash decisions from back pressure or a closing physical defender. His two-way style of play is one that tries to make the most out of every shift both on and off the puck, and he involves himself in board battles without hesitation. Dorofeyev’s ability to protect the puck and stickhandle himself into time and space ranks him on the higher end of draft-eligible wingers. He’s a quick-strike passer, one who is accurate with the cross-ice, one-touch feed in transition, plus his execution of odd-man rushes is on a veteran level. Dorofeyev’s strength in dishing the puck, however, shouldn’t hide the fact that he loves to unleash an elite shot from just about anywhere inside the offensive zone.  The way he combines power, intensity and elite puck skills with an advanced brain makes Dorofeyev a legitimate candidate for the top 10 in the entire 2019 draft.

#MHL: What a sequence from LW Pavel Dorofeyev (Ranked No. 23). This is one teenager who clearly gets the game.

Forget the fake dump-in that led to a clean entry. Look how he keeps the hammer cocked while squaring towards two different puck carriers and slipping into openings pic.twitter.com/j9LqHSEGg0