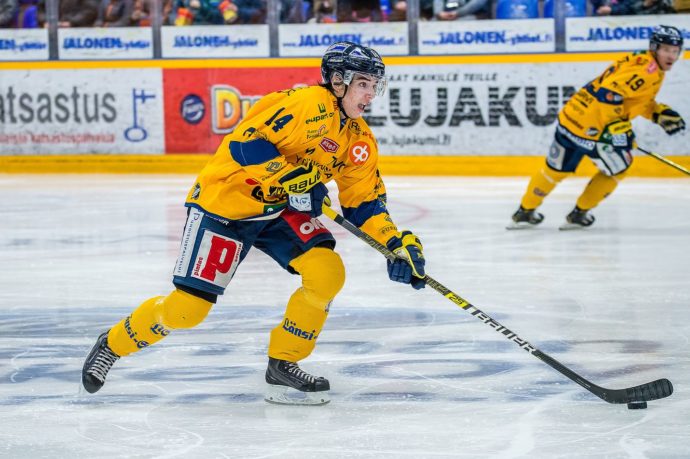 A quick and agile puck mover who can play either side and jumpstarts the attack from as far back as his own goal line, Heinola is a polished defender who immediately earned the trust of his coaches to play a significant role. At first glance, Heinola looks like a purely offensive defenseman, mostly because of his smaller frame and his confidence controlling the puck. But he has proven to be highly intelligent in his own end, using proper positioning and anticipation to create turnovers. He’ll never be a physical presence, but Heinola plays the body in an effective and efficient manner, using just enough of his upper-body strength to separate an opponent from the puck or fix him into the corner. Heinola is an excellent skater who pivots or curls away from pressure, but he also has the innate sense to identify backpressure and take the path of least resistance. Once he escapes, Heinola properly identifies blocked passing lanes and rarely forces the puck into an area that could lead to an opposing counterattack.

One underrated aspect of his game is the way he avoids passing into coverage for the sake of saving his own tail – Heinola knows when to either eat the puck and take a hit or to use his quick first step to attack an opening. Once in open ice, Heinola can uses a series of head fakes and gear shifts to enter the zone cleanly; stopping on a dime to allow the numbers to even out. He is incredibly patient with the puck and will regroup back to the neutral zone if necessary. Heinola surveys the offensive zone like a confident quarterback and passes the puck crisply and right on the tape, especially off his back foot. He properly supports his defense partner and is used quite frequently for set plays that allow him to dart into the scoring areas. Heinola is more of a playmaker than a shooter, although he can sling a high-powered wrister that he seems to favor over his slapper, and he rarely takes low-percentage shots.