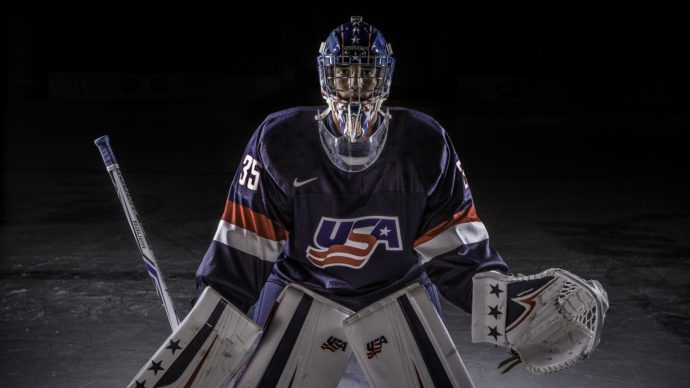 Easily the most heralded North American goalie prospect since Carey Price some 14 years prior, Knight is looking to buck the draft trend of teams taking goalies no earlier than the late first round. Blessed with size, quickness and an intense desire to succeed, the Connecticut-born backstop who grew up idolizing Jonathan Quick is more stylistically similar to Price and Henrik Lundqvist – cool and calm with noticeable confidence as he makes difficult saves look routine. Knight has strong wrists and is an incredible puck handler, possibly more advanced than Ron Hextall during his draft year and more active than Martin Brodeur was in 1990.

Knight is a classic butterfly goalie who covers the lower corners exceptionally well. His Reverse-VH is textbook, and although he occasionally leaves gaps (like all goalies), you see him physically try to keep his extended arm tight to the near post, leaving only a small opening near-post high. Knight in the RVH also seems to favor tucking his skate inside the post or dug into it as opposed to overlapping. His stick is very active, and in the RVH he positions it to break up centering feeds back into the strong side instead of putting them in the low slot. Knight’s overall rebound control is impeccable – if he sees the shot, it’s getting steered into the corner or gobbled up by his glove. He rarely puts a low or medium-danger shots back into a prime scoring area, and if he does, he immediately locks in and will pounce on a loose puck with cat-like quickness.

Knight is not overly aggressive but will challenge shooters from above the blue paint. His blocker-hand quickness is excellent, yet he can be beaten glove-side with frequency from in between the dots. It appears to be more timing and positioning technique rather than a lack of quickness or miscalculation. Knight makes up for this, however, with advanced tracking and anticipation, plus his net awareness helps him cut down angles. His lower-body muscle strength is incredible, as Knight pivots and pushes simultaneously before stopping on a dime to prevent overcommitting.