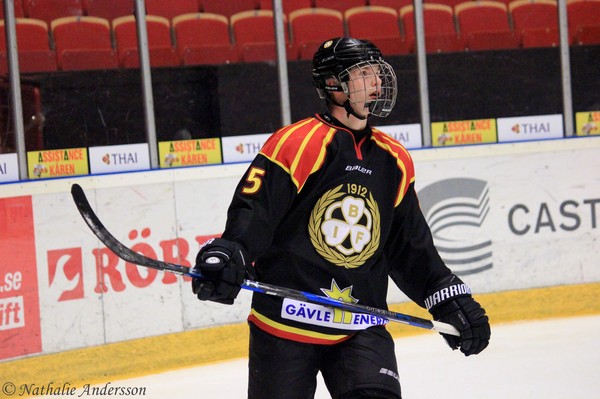 Graceful two-way defenseman who sticks to the belief that defending and coverage are equally as important as rushing and distrubuting the puck. Soderstrom last season was carefully nurtured by Brynas in their under-18 junior team, as Adam Boqvist controlled the backline for the U20 squad. Now that Boqvist has moved on, it’s Soderstrom’s chance to take the reigns and prove himself to be an elite defense prospect. He’s gifted with the puck and has a commanding presence while orchestrating an attack from as far back as his own goal line. Soderstrom is a hard shooter with a whip-like release for his wrister, which is tough to handle and causes rebounds, especially during the power play.

Soderstrom is an excellent puck handler with soft hands and a quick-strike mentality — he always looks for a home-run option and can make accurate stretch passes immediately upon retrieval. He also skates the puck out with speed and confidence, and he creates end-to-end rushes that can place him deep into opposing territory. What separates Soderstrom from almost all draft prospects is that he can read plays extremely well, and he uses his quickness and elite backskating to limit the amount of times he gets trapped. Soderstrom is an excellent one-on-one defender and keeps an incredibly tight gap. He communicates effectively with his teammates, who can rely on Soderstrom to cover the slot and only support below the goal line if the situation is critical. There are times when he backs in too much while defending against an entry, but his quick first step, fast closing speed and active stick make life otherwise difficult for opposing puck carriers. He also can play on the penalty kill and will successfully challenge bigger forwards in the low slot or crease area. Soderstrom is very strong on his skates and can deliver jarring hits along the boards or in open ice. The Real Deal Holyfield with immense promise.

#Superelit: RHD Victor Soderstrom (Ranked No. 14) scores his first of the season as Brynas J20 rallied to beat Lulea 4-3. Love how he was on the opposite side but saw and attacked an opening on the strong side.

Points haven’t been there but he’s an advanced dman for his age. pic.twitter.com/HHcCv9AYeX