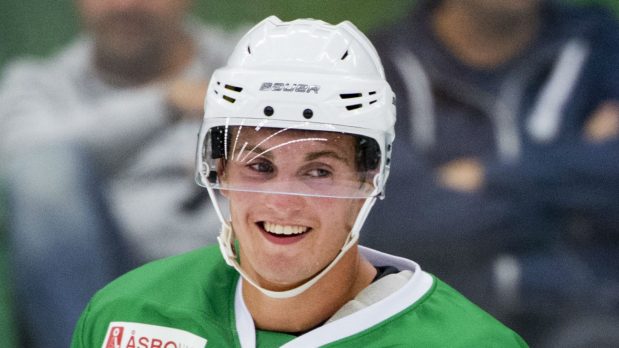 Aggressive winger with a nonstop motor and the ability to play much bigger than his measurements may indicate. Hoglander has played against adult competition in each of the last two seasons, and his dominance at the summer under-20 Four Nations tournament in August earned him a well-deserved berth on Rogle’s opening-night roster. He certainly didn’t make them regret the decision, as he was an everyday player who contributed in all areas of the rink. He plays the game at a feverish pace no matter the score or how much time is left, and his compete level is exactly what you want in a skill forward who is summoned to tackle key situations. Hoglander isn’t big, but he is fearless in the corners and immediately bounces back from hefty wallops from older, larger opponents. Without the puck, he’s an aggressive forechecker with an active stick who will finish his checks and force turnovers or rushed passes with regularity.

Hoglander is a very good skater with first-step quickness who can accelerate to top speed in an instant. He controls his pace extremely well, and his quick feet and agility allow him to make sharp moves through the neutral zone. Hoglander is a capable stickhandler who weaves his way through a dense network of sticks and bodies, and his cutbacks lure opponents away from coverage before he exploits openings with hard, crisp passes on the tape. He can play the game either inside or out, and he’s a low-maintenance shooter thanks to a quick release and his ability to get shots on net while blanketed. Hoglander has excellent vision, and his decisions with the puck seem to always make sense.

#SHL: Nice catch, transition and release from LW Nils Hoglander (Ranked No. 13) as he opened the scoring in Rogle’s 4-1 win over Skelleftea. pic.twitter.com/7UIMorS5nz