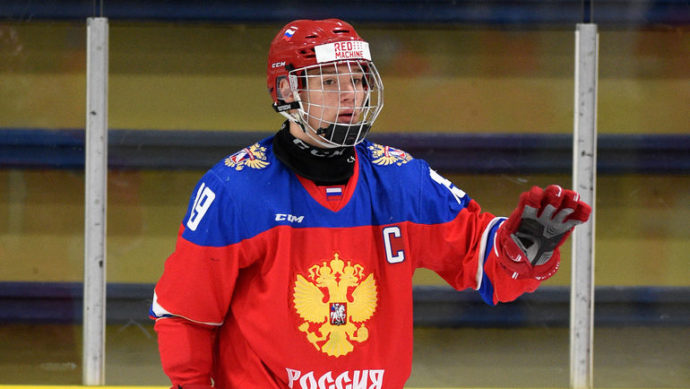 A rugged three-zone winger with an incredible compete level that compliments his superior puck skills, Podkolzin has been a top-six fixture for Team Russia at several high-profile international events. This is his first year playing in the MHL — Russia’s premier junior circuit — and he is an early-season favorite to be named one of the league’s top rookies. Podkolzin checks all the intangible blocks, as he can be counted on to address a variety of his coach’s concerns. What separates him from all the other “toolsy” forwards is that he can either create or finish plays while traveling at maximum speed, and his strong balance and stickhandling seems to convince defenders to back off more than they should. Podkolzin is effective both in open ice and during trench warfare, and he’s capable of completing on-the-tape passes that lead directly to quality chances near the net.

Podkolzin can be used to anchor the lead penalty-killing unit or run the power play from the half wall. He is confident with the puck and shows a tremendous amount of poise while controlling it. He’s quite coordinated and has soft hands to handle tough passes, plus Podkolzin hits the net with the majority of his one-time attempts. Without the puck, he’s a crash-and-bang forechecker with powerful leg drive that he uses to jolt bigger defenders off the puck. Podkolzin takes direct routes to the puck, and he anticipates eventual avenues of approach to be used by opposing puck carriers. His foot speed, edge work and agility are excellent, and he should be considered a breakaway threat in open ice. Podkolzin possesses a clear understanding of the game, and his nonstop motor and desire to be the best makes him an asset regardless of whether he’s scoring or not. Keep an eye on his temper and attempts to make big hits.

#Hlinka: LW Vasili Podkolzin (Ranked No. 18) scores a phenomenal end-to-end go to tie it up for Russia, but… pic.twitter.com/NRk6LcNtUJ