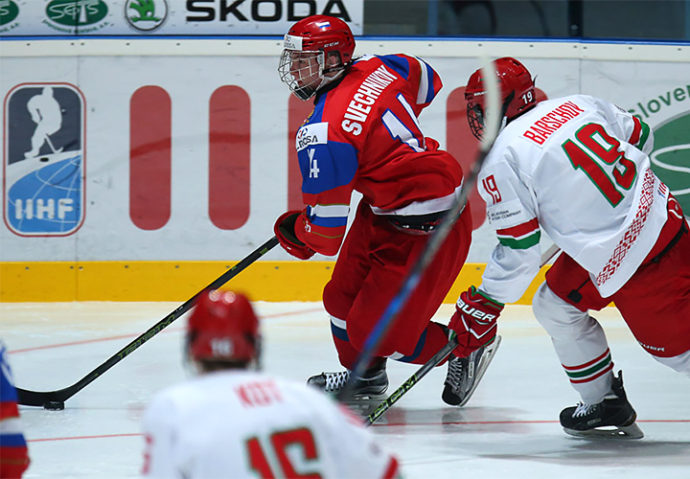 Elite goal scorer with size who combines power and finesse with an exceptional understanding of his role as a top-line talent. Svechnikov has the uncanny ability to not only stickhandle in and around traffic, but also position himself away from the puck while defenders are fixated on his equally skilled linemates. You have to keep tabs on Svechnikov at all times, and it seems as if opponents play tentative every time he’s on the ice. Svechnikov is an excellent skater with a powerful stride and exceptional balance, and he uses his speed to create separation even although he shouldn’t be defined as a road runner. He possesses a blistering shot with one of the quicker releases you’ll find — Svechnikov can score on set plays off a faceoff or rifle one from the circles. Few prospects over the last decade have been able to consistently light up opposing goalies than Svechnikov, who as a 16-year-old was the USHL’s Rookie of Year in 2017 and placed third with a 1.21 points-per-game average.

Two underrated aspects of Svechnikov’s game are his playmaking ability and strength on or off the puck. He creates a conundrum for opposing defenders and goalies because he can beat you with a pass as often as he does with his deadly shot. His vision and hands already are at an elite level. Additionally, his upper-body strength is often underestimated, and opponents losing puck battles via a shove become commonplace when Svechnikov is involved in a tight-checking affair. You can use Svechnikov in any situation, and he is a threat to score while shorthanded. He has the ability to get under the opponent’s skin and plays with bite, but Svechnikov spent a lot of time in the penalty box for dangerous hits, stick fouls and roughing up opponents after the whistle.