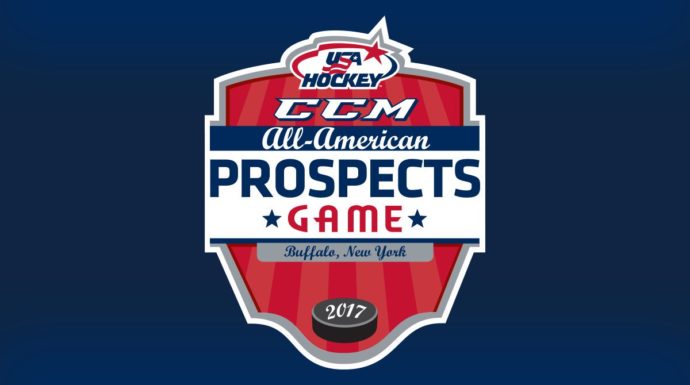 NEW YORK (The Draft Analyst) — Some of the biggest names for the 2018 NHL draft will have an opportunity to showcase their skills at the USA Hockey All-American Prospects game on Thursday in Buffalo. The event, which began in 2012, give both fans and scouts a glimpse at the best U.S.-born prospects in their first year of draft eligibility. Forty two players split into two teams will be looking to get their pre-draft season of to a solid start, with Hockey Hall of Fame defensemen Brian Leetch and Chris Chelios serving as honorary coaches. It is the fourth time Buffalo will host the competition, the last coming in 2015 when 10 participants went on to become first-round picks at the 2016 draft.

Seventeen states will be represented, with 15 of the 42 participants hailing from either Michigan (8) or Minnesota (7). All but three of the participants have either college commitments or will play in the NCAA this season, and two will play Canadian major junior hockey — defenseman Alec Regula of the Ontario Hockey League’s London Knights, and forward Jake Gricius, who plays for Portland Winterhawks of the Western Hockey League.

The majority of the prospects play in the United States Hockey League, with 15 players coming from the U.S. under-18 program.

C/LW Brady Tkachuk (Boston University, HE): Abrasive power forward with incredibly soft hands and leadership qualities who is a virtual lock to join father Keith (1990) and brother Matt (2016) as a first round pick in the NHL draft. Tkachuk was one of the top scorers on the under-18 National Team Development Program last season and is expected to be an immediate contributor to Boston University’s deep and lethal attack. He’s as dangerous on the penalty kill as he is at even strength, and one can make a strong argument that Tkachuk’s the most NHL-ready forward among his 2018 draft peers.

RHD Bode Wilde (U.S. U18, NTDP): Big-bodied puck rusher who loves to hammer the disc and has the ability to create and finish off the rush. Wilde is as close to the complete package as they come, and his size and right-handed shot make him an extremely tantalizing prospect with star potential. The native Michigander recently decomitted from Harvard in order to play next year for the Wolverines, but he also has the option of joining the Ontario Hockey League’s Saginaw Spirit, which drafted him 35th overall in the 2016 OHL Priority Selection.

#NTDP: C/W Joel Farabee (Ranked No. 18) shows some silky mitts to finish, but Bode Wilde smothered 2-on-1 & took it coast to coast. pic.twitter.com/Xv3NLf6pAr

LHD Quinn Hughes (University of Michigan, Big-10): Arguably North America’s most electrifying draft-eligible defenseman, Hughes is a flashy playmaker with top-end speed and a deadly accurate shot. He led NTDP blueliners in scoring last year with 53 points in 65 games, and was critical to Team USA’s gold medal victory at last April’s under-18 world championship. He’ll play the upcoming season at the University of Michigan, where he should see a lot of power play time and continue to develop his improving defensive game.

C Jake Wise (U.S. U18, NTDP): Top-end playmaker with superior vision and hockey sense who is the power play architecht for Team USA’s under-18 team. Wise has excellent hand-eye coordination and razor sharp awareness, and he’ll rarely make a mistake when opponents giftwrap a scoring chance. He also possesses a highly-accurate shot that seems to give goalies a hard time. Wise is one of several AAPG participants with a commitment to Boston University.

C Curtis Hall (Youngstown, USHL): Two-way center with good instincts and a nose for the net who was one of Team USA’s more reliable performers at the under-18 Ivan Hlinka tournament. Hall is a very good skater with excellent balance who uses serious lower-body power to drive into opponents. He can play either the physical or finesse game, but he seems better suited for the slogging match rather than running and gunning it.  Hall can kill penalties and does fairly well on critical faceoffs, and he doesn’t require more than a few strides to hit top speed. He’ll play for the Yale Bulldogs next season.

C Jake Pivonka (U.S. U18, NTDP): The apple didn’t fall far from the tree in the case of this scorer, whose father Michal was a solid playmaker during a lengthy career with the Washington Capitals. Pivonka dishes the puck with both accuracy and authority, but he keeps goalies honest with a deadly shot that requires little backswing. One thing that definitely sets him apart from his father is his speed — Jake has excellent straight-line speed and  a very quick first step. Thick and sturdy, Pivonka heads to South Bend next fall to play for Notre Dame.

#NTDP: Here is Oliver Wahlstrom’s goal off a 2-on-1 with Jake Pivonka pic.twitter.com/wPr5ao9jZL

RHD Adam Samuelsson (U.S. U18, NTDP): One of the better stay-at-home defenders available in 2018, Samuelsson is a physical, shut-down type whose strengths and contributions occur mostly within his own zone. A fierce competitor with a solid understanding of the game, he likes to play safe and on occasion drop down below the opposing circles. Samuelsson also is a very good penalty killer and makes quick work of power forwards trying to establish a foothold in the low slot. He can play on the power play and has a very hard shot, but he’s at his best as a safety net for one of the NTDP’s puck-pushing rearguards.

RHD Ty Emberson (U.S. U18, NTDP): Quick puck rusher who reads plays at an extremely high level and knows precisely when to attack. Emberson’s combination of size and speed makes him a prospect with serious NHL upside. He loves to take the puck deep and makes the right choices, and he seems to identify and react properly when his partner is close to isolation. Emberson is a key cog to the NTDP’s top power play unit and has a high success rate with his zone entries. He’ll stay in him home state next season when he suits up for the Wisconsin Badgers.

LHD K’Andre Miller (U.S. U18, NTDP): Converted forward who has quickly developed into a physical shutdown rearguard capable of handling pressure-packed situations. Miller has always possessed a very heavy shot, but we’re seeing him turn the corner with his puck skills and how he reads plays. Miller has dramatically improved the timeliness and accuracy of his first pass out of the zone, while his skating is certainly an asset. It is doubtful, however, that he sees significant time on the power play, but he can otherwise be entrusted with any other role no matter the point in the game. Miller will join Emberson at Wisconsin next fall.

LHD Mattias Samuelsson (U.S. U18, NTDP): A physical two-way blueliner with a hard shot who plays in all situations, Samuelsson is one of the top one-on-one defenders in his draft class. He moves quite well for his size, using a quick change of pace to burst into the offensive zone with calculated authority. You likely won’t see one of his punishing hits at an exhibition like the AAPG, but he is nevertheless an intimidating force with a booming shot who will certainly help the Michigan Wolverines when he joins them next year.

C Oliver Wahlstrom (U.S. U18, NTDP): Skilled puck hound who competes in all three zones and can be a relentless forechecker. It’s not often you see a top-line player aggressively pursue the puck and wield an active stick from start to finish, and it’s not a stretch to say that Wahlstrom earns every point he gets. His speed isn’t blinding, but he takes the right routes and reads plays like a veteran. Wahlstrom is slightly better at finishing than he is at creating, but he’s an all-around forward who is as dangerous on the penalty kill as often as he does with the man-advantage.

Oliver Wahlstrom of Yarmouth in the scoring column again–an assist–as USA improves to 3-0 at U-18 Championships pic.twitter.com/adWAeXg7oI

LW/C Joel Farabee (U.S. U18, NTDP): A versatile scorer with game-changing abilities, Farabee is the kind of player who can beat you in a variety of ways. From dominating defenders for low-slot positioning to controlling the puck through a maze of opponents, the Syracuse native is one of the draft’s best pure scorers. Farabee has an elite shot with a quick release, and owning soft hands makes wiring the puck off the pass look effortless. He’s quite good from in close and is capable of making plays with bodies draped over him, but he too can pass the puck with accuracy and find the open man without hesitation.

C Jack Drury (Waterloo, USHL): Hard-working three-zone center who makes up for a lack of flash and dash with heady, composed play. Drury was Team USA’s top scorer and leader at the Ivan Hlinka, earning most of his points off determinination, proper positioning and a nonstop motor. Tough in the corners and possessing good vision to create off board battles, Drury is headed to Harvard University next fall.

LW Jack Jensen (Eden Prairie, HS-MN): Skilled goal scorer with soft hands and excellent agility who is committed to the University of Minnesota. Jensen will be entrusted with carrying Eden Prairie back to another shot at a Minnesota state title, but he’ll have to do it following the graduations of top-scoring forwards Casey Mittelstadt and Hunter Johannes. Jensen was quiet for Team USA at the Hlinka in August, so he could use a strong AAPG performance to get his season off on the right foot.

#TheTourney17: Mittelstadt made a bonkers set-up upon zone entry, then helps set-up Jack Jensen for the tying goal. Now 2-2. pic.twitter.com/AeDdgn9BLT