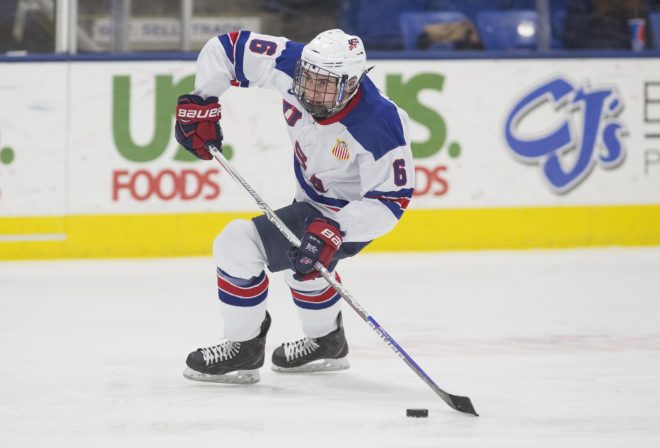 Quinn Hughes of Team USA’s under-18 program is one of several draft-eligible defenseman with spectacular puck skills (Photo: Rena Laverty)

NEW YORK (The Draft Analyst) — The debate over which prospect will go first overall in the 2018 NHL draft has yet to reach the simmering point, as Swedish phenom Rasmus Dahlin appears locked in as the consensus top pick. Regular seasons across Europe have already started, with North American junior leagues following suit later this month. Although there’s plenty of hockey to be played, Dahlin has performed well enough in Sweden’s top league to earn the distinction of being the best among his peers. The same can be said, however, of talented Russian sniper Andrei Svechnikov, who like Dahlin has dominated the international circuit but has done so against competition within his own age bracket. Svechnikov is the best goal scorer of his draft class and at this point the top forward available. Furthermore, Svechnikov’s transition from Russia to the defense-oriented United States Hockey League last season was as seamless as they come — he was named Rookie of the Year and finished third with a 1.21 points-per-game average. On one hand, you have the dynamic puck mover in Dahlin — a dizzying skater who goes coast-to-coast and thinks the game at a mature level. On the other, Svechnikov — a lethal assassin with the puck who has pinpoint accuracy and is nearly unstoppable in either one-on-one or odd-man rushes. Think of it as choosing between a star forward like Alex Ovechkin or a “franchise” defenseman in the mold of Ottawa’s Erik Karlsson. It makes for one heck of a debate, and what’s similar to the one involving Svechnikov and Dahlin is that there is no wrong answer. It simply boils down to preference — an elite goal scorer versus an electrifying defender.

One thing certain is that goal scoring in the NHL has slowly retreated down to Dead Puck Era levels. Talk of making nets bigger, rinks wider and pads smaller started somewhere, and it wasn’t during the halcyon days of Wayne Gretzky and Mario Lemieux. The ability to finish — burying chances you should bury and those you shouldn’t — has become a rarity. For all of Dahlin’s strengths — speed, grace, puck control, vision — he still may take longer than Svechnikov to leave an imprint on the league. Remember, a team picking first or second overall usually is in bad shape both on the ice and at the box office. Goals win games. Wins fill seats. In our opinion, the shortest path to success begins with Svechnikov.

Still, the names will not matter as much now as they will in June, when NHL teams will gather in Dallas for the league’s annual entry draft. The crop of 2018 draft prospects is supposed to be a good one — far better than what was available last year in a draft many considered to be top heavy with talent. The strength of the league’s next batch of stars lies within a superior group of defensemen, led by Dahlin and bolstered by Spokane’s Ty Smith and Sweden’s Adam Boqvist — two defenders who in August dominated at the under-18 Ivan Hlinka tournament. Throw in Americans Bode Wilde and Quinn Hughes, and Canadian junior stars Ryan Merkley and Jared McIssac, and you have the makings of what could become the best group of defensemen in NHL draft history.

Most of the big names from North America are defenders, but there are several notable forwards who could sneak their way into the conversation for first overall. Canadian-born center Joe Veleno — the top pick in the 2015 Quebec Major Junior Hockey League Draft — should be free from his depth role on Saint John and thrust into bigger responsibility. A tremendous skater with elite vision and a great shot, Veleno was Canada’s best forward at the Hlinka and was used in all situations. In the United States, power winger Brady Tkachuk is a lock to join father Keith (1990) and brother Matt (2016) as the family’s third first-round pick. Brady, who will play for Boston University in the fall, combines the same power and finesse the Tkachuks have been brining to the NHL since the early 1990s.

Beyond Svechnikov, this draft also features strong group of from European forwards, beginning with Czech puck wizard Filip Zadina, who like Hischier in his draft year will play for the Quebec League’s Halifax Mooseheads. Finland, which produced six first rounders last year, has a pair of skilled centers in Jesperi Kotkaniemi and Rasmus Kupari. Kotkaniemi is a two-way force who is playing against adults in the elite Liiga, while Kupari is arguably the best player in Finland’s junior leagues.

Keep in mind that Dahlin is no sure thing to go first overall, as we have witnessed both talent evaluators and critics are grow increasingly bored with the status quo they themselves established one, two or even three years before a given prospect is draft available. There are two annual prospect events that usually preceded a shift in opinion — the first being the under-20 world junior champions that will be held this December in Buffalo. The second, the Canadian Hockey League Top Prospects Game, is played in late January some three three weeks after the world juniors are complete. Sadly, it is within this 30-day window where a prospect can play himself in or out of a scout’s favor regardless of what was accomplished during the regular season or playoffs. Such was the case in 2016, where defenseman Olli Juolevi and power forward Pierre-Luc Dubois respectively used dominant short-term performances at the world juniors and TPG to vault up NHL team and media draft rankings. Dubois surprisingly went third overall to the Columbus Blue Jackets, and Juolevi at fifth overall became the first defenseman taken in 2016. Although it’s only been one season since their draft, Dubois and Juolevi are the only two Top-10 picks from that draft class who have yet to appear in an NHL game. Nico Hischier, who was the first pick in the 2017 draft, used spectacular performances at both the world juniors and the TPG to not only enter the conversation for first overall, but springboard past Nolan Patrick and his three-year grip on being the consensus top pick.

As you can see, Dahlin certainly has competition. You can count on Dahlin, Svechnikov, Tkachuk, Zadina and several others to play at the world juniors, which last season was practically devoid of first-year draft eligible talent. Both Zadina and Svechnikov — now property of the Ontario Hockey League’s Barrie Colts — also are eligible to play in the TPG.

Keep an eye on

C Milos Roman (Vancouver Giants, WHL): Roman is the best of a thin Slovakian draft contingent and should provide the Giants with some much needed scoring depth. Strong on his skates and a three-zone player, Roman is capable of taking over games and has done so against older competition for the last few seasons. Expect him to play at both the world juniors and the CHL TPG

C/W Ryan McLeod (Mississauga Steelheads, OHL): One of the most underrated prospects of the early season, McLeod is a versatile forward who had a phenomenal postseason for the Steelheads, plus he’s shown excellent progression in both his role and production. He’s got size and very good speed, but his passing and vision are what make him money. McLeod ready to lead his team after playing with veterans each of the last two seasons.

C Ty Dellandrea (Flint Firebirds, OHL): Exciting 200-foot center with a wicked shot who is a candidate to lead his OHL draft peers in scoring. Dellandrea has very good size, takes critical draws and has a great approach to every shift. He’s the kind of kid you want on the ice regardless of the situation.

C/W Joachim Kondelik (Budejovice, Extraliga): Big, heady two-way forward with soft hands and good wheels for his size. Kondelik reveals an imposing shadow — at 6’6, 212 pounds, there aren’t many teenagers who can handle him. He’ll earn his stripes against adults this season and could sneak onto the Czech WJC team as a penalty killer and faceoff specialist.

LHD Georgii Dedov (Vityazi, MHL): Big, physical Russian defender with a long stride who can wallop the puck from the blue line. Dedov can play big minutes and does well on the penalty kill. He’s a candidate for an early-season KHL promotion and is deserving of a spot for either the Super Series squad or the November U20 Four Nations.

G Olivier Rodrigue (Drummondville Voltigeurs, QMJHL): Canada’s saving grace at the Hlinka is more than just a one-tournament wonder. Rodrigue was the third pick in the 2016 QMJHL draft and stood on his head last season for a thin Voltigeurs squad. He requires little help from a mechanics standpoint — his positioning and net awareness are excellent.

Below is a list of first-year eligible draft prospects for the 2018 NHL Entry Draft. This list will serve as the baseline for subsequent Top-500 rankings throughout the season. Players born between September 16, 1999 and September 15, 2000 are in the zone for consideration.