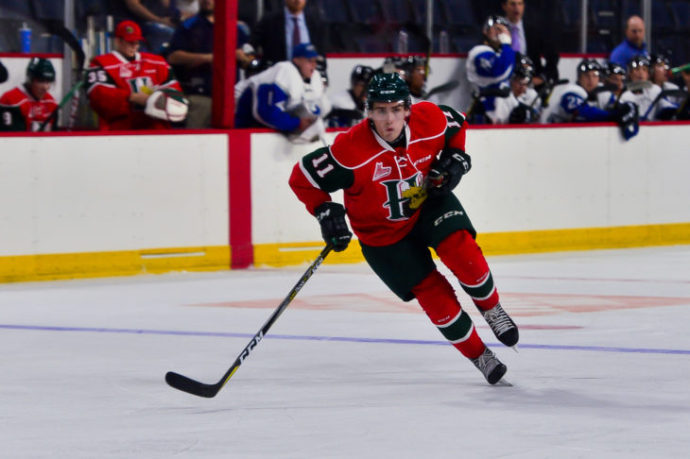 Rangy skilled winger with soft sands who mixes his game-breaking skills with a tremendous appetite for success. Zadina arguably is the best forward prospect to come out of the Czech Republic in the last few seasons, and since he was 16-year-old has been hand-picked to lead his country at the biggest international tournaments. He has exceptional vision and hockey sense that makes every teammate a threat to score when he is on the ice. Strong on his skates, Zadina is extremely difficult to contain because he’s as elusive moving laterally as he is when jetting in a straight line, and even the most competent defenders struggle to maintain a tight gap. Give him too much room, however, and he’ll exploit it.

Zadina is easily the best stickhandler among any draft-eligible forwards, and you can count on him to set up quality chances that originate from the corner several times a game. But he’s not just a playmaker — Zadina has elite finishing skills and can beat a goalie in a manner of ways. He has an excellent shot that he can fire off the pass with accuracy, but his shiftiness and quick bursts towards the goal provides him with the chance to deke or flash a deadly backhander. Zadina is a fierce competitior who plays with controlled emotion, and he is not just a point producer — he likes to get in on the forecheck and position himself properly as opponents attempt their breakouts. These anticipation skills lend to his superior command of play development and makes him as dangerous on the penalty kill as he is in other situations.

#QMJHL: More stickhandling on display by LW Filip Zadina (Ranked No. 3), who sets up RW Connor Moynihan to make it 3-2 Halifax after 40. pic.twitter.com/N20Ty5AKzb