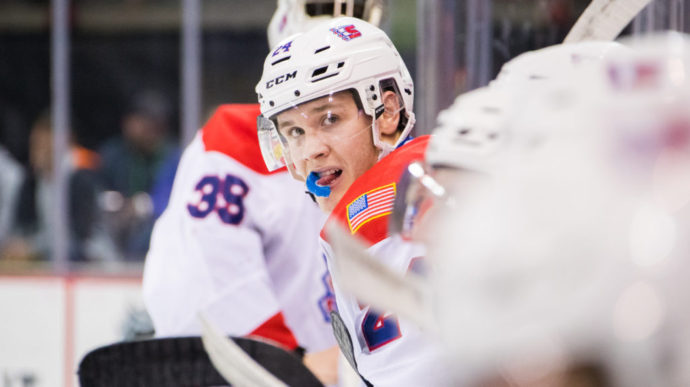 Instinctive two-way force from the blue line with exceptional hockey sense and a strong desire to join the attack and create chances. Smith’s mobility and vision seem to throw opponents into a state of confusion — his ability to transition quickly from defense to offense is excellent. He’s an effortless skater with strong balance and agility, and he can pivot with the best of them. You’ll rarely see Smith get caught chasing his man or losing positioning, as he makes timely reads and anticipates exactly where the puck will end up. He is a hard, accurate shooter and a pure power play quarterback who works the point with confidence and poise — Smith evades pressing penalty killers with ease and will exploit gaps with crisp, tap-to-tape cross-ice passes. You don’t wan’t to overcommit too much with Smith, as he’ll spin or pirouette his way into a quick dash to the open slot. A clean, reliable three-zone defender with leadership qualities and a team-first attitude, he is exactly the guy you want on the ice to kill a big penalty or lock horns with a top-scoring opponents. Wise beyond his years, Smith is almost destined for NHL longevity and has the potential to be a cornerstone piece and one of the top defenders in the league.