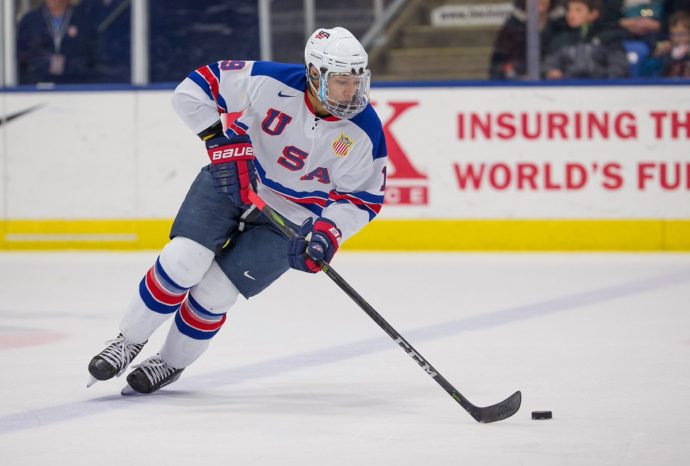 Talented two-way defenseman with top-pairing upside who is committed to the University of Wisconsin. A strong skater with very good speed, Miller generates a lot of power into his stride and is starting to beat both opposing forwards and defenders to the outside. His stick and body positioning in the neutral zone are exceptional, and you can count on Miler to intercept more than a handful of cross-zone passes that he quickly transitions into rushes the other way. His ability to make clean passes on either his forehand or backhand, plus the manner in which he sharply pivots his way into bigger openings might explain how such a big and physical defenseman is only a few years removed from being a forward.

Watching Miller smother in one end and skate effortlessly in the other makes me think his learning curve is not steep at all — he plays a clean, composed game in his own zone and looks fantastic when he’s unbridled. Miller can be physically intimidating, and his strong lower half makes rubbing out forwards of any size look easy. One thing to consider is that this group of NTDP defensemen is deep with offensively-gifted puck movers, so it’s natural for a cerebral kid like Miller to focus on his defensive-zone play and act decisively with the puck only when the opportunity makes sense. This type of approach reduces haphazard tendencies to a bare minimum. Choosing your favorite draft-eligible defensemen from this year’s version of the under-18 NTDP is a lot like being asked to pick your favorite child, but don’t be surprised if a less-heralded kid like Miller has the best NHL career out of any from his defense corps.