Photo courtesy of the Chicago Steel 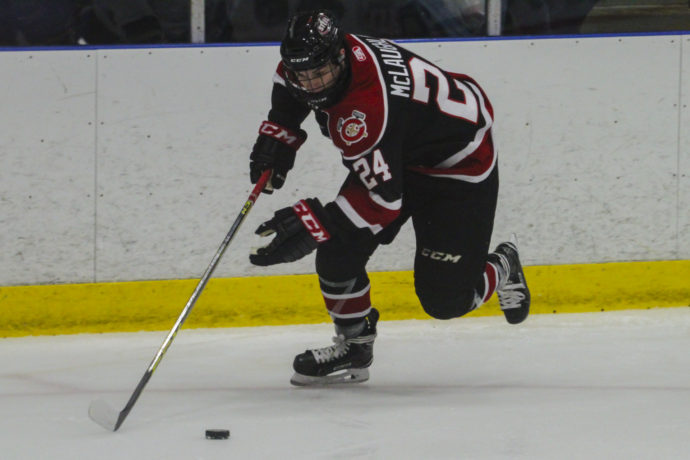 LW Blake McGlaughlin, Chicago Steel (Ranked No. 42): A skilled playmaking forward who can man either the wing or center, McGlaughlin is blessed with excellent vision to turn any teammate into a scoring threat. He is one of the more talented set-up men in a draft relatively deep in terms of puck distributors, but McGlaughlin is one of the best from the North American crop. His zone entries are a thing of beauty, and his speed and elusiveness create a decision-making quandary for defenseman — he spins away if you play him tight, exploits open ice if you back in too deep. He is one of the top scorers in the USHL and should be groomed to be a top-line player who can orchestrate the power play but also finish his easier chances in front of the net. McGlaughlin, a Minnesota native who led Grand Rapids to a high school title last year, is committed to play for the University of Minnesota.

LW Sampo Ranta, Sioux City Musketeers (Ranked No. 78): Jersey-flapping Finnish winger with a deadly shot/speed combination who is one of the USHL’s top rookie goal scorers. Ranta at this stage of his development is a one-trick pony, but similar things were said of some the NHL’s most feared snipers. Ranta has good size and balance, and powering down the wing with a full head of steam forces defenders to mistime their step-ups or retreat into the circles. He should be a fixture on any power play and counted on to create his own shot, but Ranta probably isn’t the kid you would want on the ice to hold a lead. Now that Ranta’s got the shooting thing down, he’ll need to learn how to incorporate his linemates into the offense and make more high-percentage plays.

C Tyler Madden, Tri-City Storm (Ranked No. 82): A swift-skating center with a nonstop motor and a strong understanding of the game, Madden has hit a little bit of a scoring funk after a lengthy midseason stretch where just about everything was going in. He’s a tireless worker who excels in all three zones and gives you the same effort every shift. Madden, whose father John was a Selke-caliber forward that won Stanley Cups in New Jersey and Chicago, is a very good stickhandler and can carve up a zone defense with his patience, agility and an assortment of fakes and dekes. He takes straight-line routes to the net with little regard for his own safety.

C Jachym Kondelik, Muskegon Lumberjacks (Ranked No. 92) : Two-way power forward who often plays on Muskegon’s top line and can even play the point on the power play. More smooth than quick in open ice, Kondelik has a soft touch and good vision to help beat back a pressure in the neutral zone. He uses his size, strength and reach to his advantage during board battles, and cleanly connects with cutters through traffic. Kondelik may be a jack-of-all-trades at the USHL and international level, but he likely tops out as a solid depth forward who can be used in critical late-game scenarios.

C Curtis Hall, Youngstown Phantoms (Ranked No. 96): Strong, powerful two-way center with speed who can finish in a variety of ways. It feels likes you can count on Hall to get at least one breakaway per game in addition to the three or four odd-man rushes he initiates. His overall puck skills are good for a kid who is willing to play physical, and most of his shifts are spent buzzing opposing defenders who are looking to break out. Hall, who is committed to Yale, is more of a finisher than a playmaking pivot, but his size, instincts and speed make him valuable on both the penalty kill and late in games.

RW Ryan O’Reilly, Madison Capitols (Ranked No. 106): Power winger with size, speed and a slew of dekes and dangles to get him as close to the goal as possible. O’Reilly, who is committed to Denver, may look a big and imposing brute, but he has incredibly soft hands and is capable of making and finishing plays with a high degree of difficulty. To top it all off, he has a deadly-accurate shot that can knock a goalie off his skates. Problems with consistency and decision making usually go hand in hand with teenager power forwards, so it’s not the end of the world if O’Reilly pulls the occasional disappearing act.

C Mathias Pettersen, Muskegon Lumberjacks (Ranked No. 108): Strong Norwegian import who mixes in a good helping of skill to an approach built on tireless effort and physicality. Pettersen is tough to knock down and finishes his checks, and he’ll even hammer bigger opponents down to the ice. Once he has control of the puck, Pettersen is a solid stickhandler who rapidly changes direction and makes the most of his brief moments in open ice. His decisiveness once he crosses the red line is apparent in the way he times his dumps-ins rather than careless hand possession over to the other team. This leads to a lot on in-your-face moments with opposing defenders who end up either turning the puck over or get caught defending a lengthy cycle. That being said, Pettersen can enter the zone cleanly and with options already identified, with one being a strong power move to the net that forces the goalie into making a tough save.

LHD Michael Callahan, Youngstown Phantoms (Ranked No. 123): Mobile two-way defenseman with a very hard shot who looks to transition the puck with his wheels or hard, crisp breakouts. Callahan is a very good straight-line skater who loves to join the rush and play aggressive inside the opposing zone, but the timeliness of his pinches and step-ups reveal a thinking-man’s defender who can be counted on to do a lot more than just hammer pucks. Nonetheless, his shot is quite impressive, and he gets a lot of mustard on his wrister or slapper off his back foot.

LW Matej Pekar, Muskegon Lumberjacks (Ranked No. 148): Solid two-way forward who has very good speed and plays hard in every inch of the ice. Pekar sees a lot of top-line duty with Muskegon, plus is utilized effectively on both the power play and penalty kill. Pekar’s positioning is impeccable and he consistently evades detection to get his stick cocked and ready. I see Pekar as a dual threat that can set up plays off the cycle but also finish in open ice and bury chances at the side of the net. He’s strong along the boards and will continue to battle for pucks even once he’s lost possession, but also knows when it’s time to release and get back to defend a counterattack.

C Jack Drury, Chicago Steel (Ranked No. 159): Mature, hard-working center with NHL bloodlines whose top-end production is a byproduct of his ridiculous work ethic in every situation regardless of the score. Drury, whose father Ted spent the majority of his NHL career with the Anaheim Mighty Ducks, epitomizes the old school “lunchpail” type by hustling and fighting tooth and nail for the puck. He’s a workhorse along the boards and usually beats his man to coveted real estate in front of the net. All that said, Drury is able to pile up an impressive point total from all the scoring chances his blood and sweat help create. Not only was Drury Team USA’s best player at last summer’s under-18 Ivan Hlinka tournament, but he’s also among the league leaders in scoring as a first-year draft eligible.

He’s very good on draws and can be both the main set-up guy on the power play and Chicago’s most reliable penalty killer. Drury’s speed and shot are both average, but he understands the game well enough to make the right reads and convert his opportunities.

RW Alexander Steeves, Dubuque Fighting Saints (Ranked No. 200): Steeves is a two-way power forward with very good speed and a deadly shot who has played on Dubuque’s top line for most of the season. The Notre Dame commit is used on the top unit of the Fighting Saints’ power play and penalty kill, and he is a threat to score in either situation. Steeves’ shot is very heavy and creates a lot of rebounds, but he’s quick enough to drop the shoulder and skate past matador defenders to increase the quality of his scoring chance. He can play a physical, tenacious style and knows what to do to turn a harmless dump-into a lengthy possession or a clean look on goal.