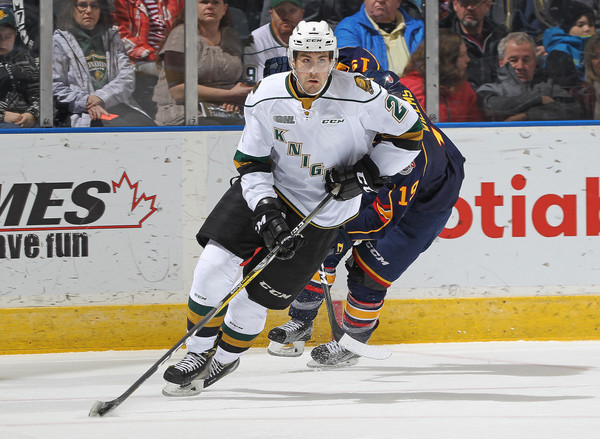 Big-bodied offensive defenseman with excellent passing skills who can orchestrate a power play as good as any blueliner from any of the last several NHL drafts. Bouchard immediately became the leader of not just London’s defense corps, but of the entire team after the Knights traded away most of their bigger names at the OHL’s trade deadline. His overall game has steadily developed to the point where he’s been logging around 30 minutes a night while matching up against top lines. You’re going to be hard pressed to find a smoother North American puck distributor, especially one that makes difficult plays look routine. His shot is very hard, and it’s most effective when he keeps it low enough that goalies plunk the rebounds right into the low slot.

Offensively, Bouchard delivers a consistent effort with his puck management and playmaking, though the prevailing knock on him appears to be average straight-line speed. The good news is that Bouchard is nimble for his size, plus he has excellent timing and awareness to eventually outmaneuver pressure and join the attack deep into enemy territory. His feet are quick enough to maintain a tight gap while backskating, and his massive wingspan and long, active stick help limit the number of times an onrushing forward breezes past him. Bouchard has top-pairing potential with the skills and smarts to be a big point producer at the NHL level.