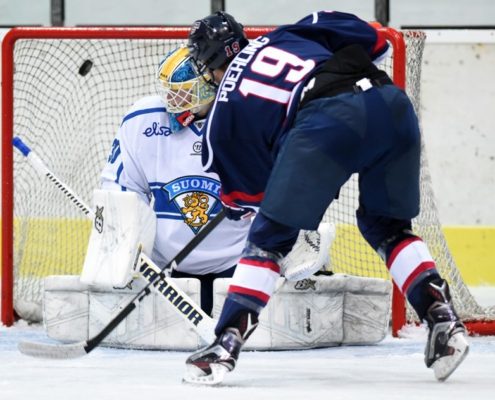 New York (The Draft Analyst) — The United States and Canada both needed overtime to win its respective opening game at the 2016 Ivan Hlinka Memorial Cup, while the Swedes and Czechs scored convincing wins over Russia and Switzerland, respectively. The Americans (1-0) needed the extra session to avenge last year’s opening-day defeat to Finland (0-1), which forced overtime late in the third period on the second of two power play goals by LHD Eero Teravainen (2017 Draft). Top-line center Ryan Poehling (2017 Draft – St. Cloud State) scored the game winner seconds after his thwarted breakaway attempt found him alone in the slot in front of goalie Lasse Lehtinen (2017 Draft), who Poehling beat with a wrister under the crossbar. Team Canada escaped with a 3-2 win over the host Slovaks thanks to LW Maxime Comtois‘ (2017 Draft – QMJHL) second goal of the game. The Canadians held a 2-0 lead after 40 minutes before Slovakia tied it with a pair in the third — the second by LW Filip Krivosik (2017 Draft – Liiga Jrs.) with under a minute left in regulation. Sweden took care of business with a thorough 3-1 win over Russia, due in large part to the goaltending of Olle Erikkson Ek (2017 Draft), who was outstanding in a 34-save effort. The host Czech Republic made quick work of Switzerland in a convincing 6-1 rout, with each of its four lines scoring at least one goal.

Poehling is a power forward whose elite skill and strength are bolstered by a strong work ethic and legitimate leadership qualities. He served as team captain, and who better to score the critical game winner than the guy his teammates are leaning on. Poehling is a very good skater with top-end vision and an excellent shot, and the Finns had a tough time slowing him down as he barreled down the wing in complete control. One shift in particular typified the kind of player he is — he hustled, battled and fought for the puck during a lengthy cycle to draw a penalty Team USA eventually scored on. In overtime, his clean breakaway was stopped by Finnish goalie Lasse Lehtinen, but he had the presence of mind to avoid detection to reiceive the centering and and bury the game winner with a pro move and shot right under the crossbar. A wonderful talent who accelerated his schooling to suit up for St. Cloud State in the fall.

Keane was just one of several Team USA defenders who played a smart, composed two-way game, but we have to admit we didn’t expect him to look like a 10-year veteran from start to finish. He has the physicality and size to be considered a legitimate pro prospect, and the way he distributed the puck in all circumstances leads up to believe his minutes will go up as the tournament progresses. He can play physical, and his one-on-one tactics are advanced for a kid who hasn’t turned 18. Keane displayed confidence and a long stride as he took the puck up the ice, and his pinches were timed perfectly. On one occasion, he darted in to try to keep the puck in the offensive zone, but soon realized the risk wasn’t worth the reward, so he stopped on a dime and swiftly backskated to check the ensuing enemy attack.

Pastujov is a NTDP’er who joined the Hlinka squad as part of his recovery back from shoulder surgery, so it was a given that this talented forward would be considered a favorite for big minutes. A power forward with a soft touch and strong hockey sense, Pastujov   was an impact player from start to finish, using his size and speed to keep the Finns on their heels. He made a world-class lead pass (off the boards, no less) to spring a 2-on-1 that led to a goal in the first period, and his hustle and ability to read plays turned what seemed like a harmless dump-in behind the Finnish net into a bank-shot for a go-ahead goal that also slowed down Finland’s momentum in the third.

Erikkson was the star of the game for Sweden, stopping 34 shots en route to a 3-1 win. He was highly active with his stick in all situations — he will break up rushes, breakaways, centering feeds and hard-arounds. Erikkson Ek’s effective use of the poke check on scoring chances from in close is a rarity for the under-18 crowd.
He tracks the puck extremely well and not once he he seem to panic during tense scenarios. He looked fearless, and out-waited an attacker in every instance in which his opponent had a clear path to the net. Erikkson also showed exceptional lateral movement, which he displayed when he stoned Andrei Svechnikov’s stuff attempt at the side of the net in the second period.

Lots of eyes were fixated on Sweden’s top blueline prospect in years, and Liljegren certainly didn’t disappoint. He was quiet offensively, but the nature of the match revealed no such requirement to consistently press the attack and force the issue. Sweden took an early lead and held it, due in large part to a collective effort on defense. Liljegren displayed exceptional one-on-one play, and he showed an improvement in slot coverage since the U18 worlds. We all know he can skate and shoot, but mastering the art of defending his territory is what will make him a legitimate challenger for the top pick in 2017. He is a lot stronger than we originally assessed him to be — his pins-and-holds were effective, and he leaned on several equal-sized Russian forwards to steal the puck. The fact that he tailored his game to the scoreboard and pace tells us he’s one of the gems to covet.

Brannstrom is an outstanding two-way puck rusher who logged minutes and ran Sweden’s power play. He is not big in length, but he’s a wide body with lower-body strength who understands plays before and as they’re developing. Brannstrom uses multiple options during breakouts, and makes sure opponents know he knows what he’s doing. He is beyond confident with the puck as he maneuvers of the ice, and his mobility and hard tape-to-tape passes are similar to Ivan Provorov’s. You’d think a defender under six feet would have trouble against bigger forwards, but his positioning and stick work make him difficult to get around.