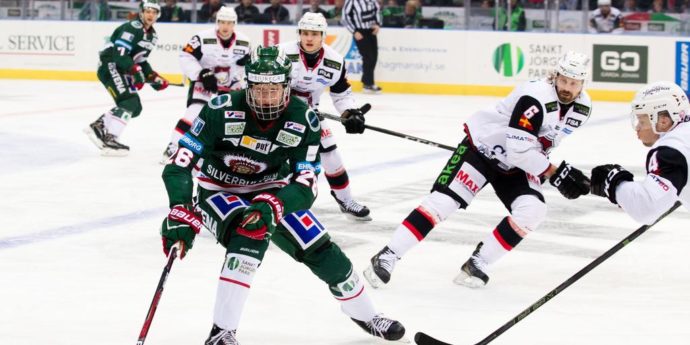 Frolunda defenseman Rasmus Dahlin is expected to be the first Swede in nearly 30 years to go first overall at the NHL Draft. (Photo: Michale Erichsen)

NASHVILLE (The Draft Analyst) — Below is the final ranking of first-year eligible draft prospects for the 2018 NHL Entry Draft. Players born between September 16, 1999 and September 15, 2000 are in the zone for consideration. Any North American-trained player born between January 1, 1998 and September 15, 1999  is considered a “draft overager”, meaning he already has been eligible for a previous draft. Cutoff for European-raised overage prospects is January 1st, 1997 to September 15, 1999. Players who are considered draft overagers from either North America or Europe will be ranked separately and released at a later date before the draft.

This list is the culmination of 11 months of watching nearly 1500 first-year draft eligibles, but in no way should the rankings be considered a definitive, end-all, be-all. The purpose is to give fans a general idea of where the prospects rank in terms of their NHL star potential vs the likelihood of never making it. Player X being ranked three or even 10 spots ahead of Player Y means very little. Unlike the NFL, the NHL does not pay draft picks based on where they were picked. The ultimate decision on where a player is ranked weighs heavily on the “eye test”, but analytics also play a role; specifically even-strength production, points-per-60 minutes and point production at even strength relative to their teammates. Quality of league play and adjusted league point totals (NHLe) are also utilized to assist in making determinations

The NHL’s Central Scouting Bureau (CSB), which does a fantastic job scouting and compiling notes on hundreds upon hundreds of players, split their rankings into four groups — North American skaters; European skaters; North American goalies; European goalies. The CSB lists are invaluable tools to confirm or deny player data or identify players who are deserving of a look. However, I feel that a clearer picture is given when players are ranked against all their peers, not just where they play or their position.

Again, these rankings are NOT a predictor of how things will unfold on draft day. That guessing game is reserved for my mock drafts, which are purely for fun and based off of factors like team draft trends, prospect depth charts and critical needs.

The opinions of other media, scouts, coaches, front office executives and fans had little to no bearing on these rankings whatsoever. Although recommendations from sources on which players to observe are always welcome and at times utilized, the analysis, final scouting reports and rankings are based on my observations and my observations only.

Lastly, I would like to thank all those who have helped me gather the information I needed to complete this project, including all the fans I interact with on a daily basis. I also would like to extend a huge amount of gratitude to all the team beat writers, columnists, broadcasters and fellow bloggers and podcasters who have either provided me with information or requested some of my own input. A a final shout out to all the key statistical websites, especially EliteProspects.com, HockeyDB.com, IIHF.com, Prospect-Stats.com and all the league sites that do such a tremendous job providing me with real-time stats.