Photo courtesy of The QMJHL 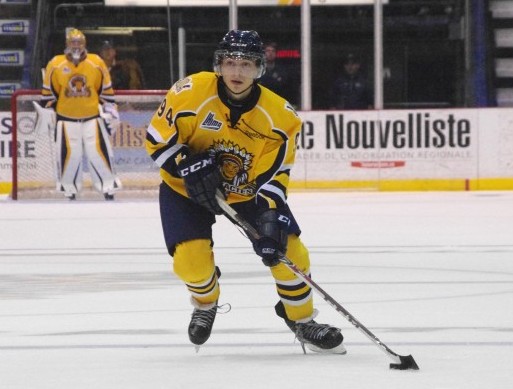 Position: Defenseman
Shoots: Left
Height/Weight: 5’10, 165 lbs
Born: May 12th, 1998 Roberval, QC
The Draft Analyst Ranking: 28th (March)
Obtained: Selected by the Shawinigan Cataractes in the first round (third overall) in the 2014 QMJHL Entry Draft.
Notes: 2015-16: Named the QMJHL’s best defenseman after leading all blueliners in assists (64) and points (74)…His 74 points were the most by any CHL defenseman this season, and ranked first among all draft-eligible rearguards…Played for Team Cherry at the 2016 CHL Top Prospects Game…Led all defensemen with three assists and tied for the scoring lead among defensemen with three points in two games for Team QMJHL at the 2015 CHL-Russia Series…Led Team Canada defensemen with a goal and two assists in five games as they won the gold medal at the 2015 under-18 Ivan Hlinka Memorial Cup…2014-15: Named to QMJHL All-Rookie Team after he led first-year defensemen with 38 assists and 43 points – good for 12th in the league and a Shawinigan single-season record for rookie defensemen…Netted a goal and two assists in five games for Team Canada-Black at the 2014 World U17 Hockey Challenge.

Playing with the burden of great expectations is never easy, but the swift-skating Girard lived up to his reputation as an elite scoring rearguard by topping all CHL blueliners in scoring – a distinction he held almost from start to finish. He was the third overall pick in the 2014 QMJHL draft (behind Pascal Laberge and fellow defender Luke Green), and he’s distinguished himself by playing a style efficient yet flashy at the same time.

Scouts long have projected pro-level playmaking abilities, and Girard hasn’t let them down, leading rushes up the ice with speed and decisiveness. He has very good first-step quickness and excellent top-end speed. He has above-average balance for a defenseman listed at 5’10, owning a good, strong stride. His lateral movement is excellent, using a strong lower body to cover ground in a hurry if a play expands the ice on the periphery.Girard’s bread and butter, however, is playmaking. He’s an exceptional puck distributor with a soft set of hands, using them to corral hard or inaccurate passes. He makes crisp passes on the tape and with authority — forehand or back – and leads the man with consistency. Patient and aware, Girard does not own a good shot, and will acquiesce to the pass nine times out of 10. Moreover, he is far from physical, but his positioning is developing and his reads are excellent. A real leader who will instantly improve a team’s breakout and power play capability.