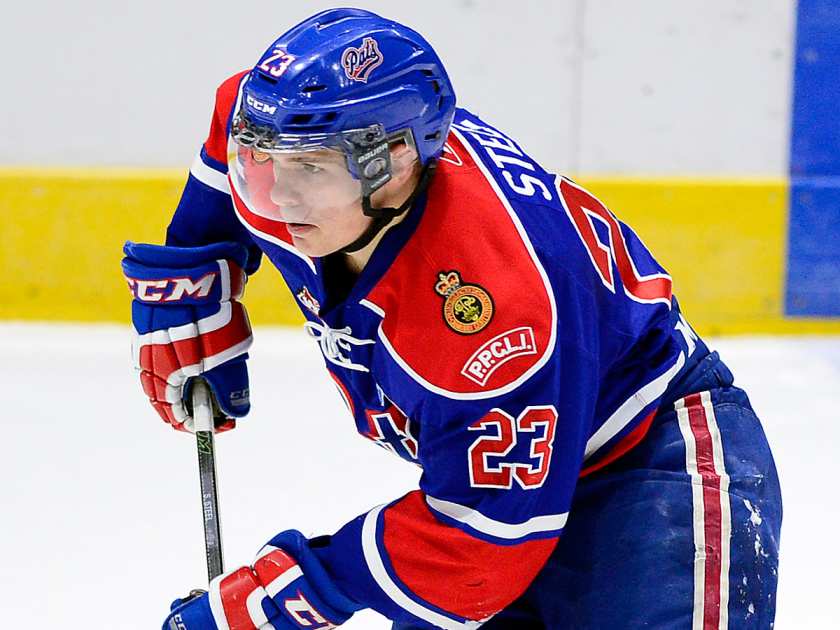 Position: Center
Shoots: Left
Height/Weight: 5’11, 176 lbs
Born: February 3, 1998 Sherwood Park , AB
The Draft Analyst Ranking: 24th (March)
Obtained: Selected by the Regina Pats in the first round (second overall) in the 2013 WHL Bantam Draft.
Notes: 2015-16: Ranked third on Regina in assists (47) and tied for third in points (70)…Recorded points in 16 of his last 23 regular season games…Thirty of his 37 assists were primary…Ranked 29th in the WHL in shootout efficiency (3 for 8)…Played for Team Cherry at the 2016 CHL Top Prospects Game…Recorded a goal and two assists in five games to help Team Canada win the gold medal at the 2015 under-18 Ivan Hlinka Memorial Cup…2014-15: Placed third among WHL rookies in scoring with 54 points in 61 games…Registered second-most assists (37) among first-year players…Netted a goal and two assists in five games for Team Canada-Black at the 2014 World U17 Hockey Challenge.

Steel made immediate noise in the WHL after Regina made him the second overall pick in 2013, placing among the leaders in scoring categories, and bridging his team’s rebuilding gap. He’s part of an impressive group of 1998-born draft eligibles to come out of Western Canada, and some might say he’s at or near the top of an impressive list of WHL forwards. Steel is an excellent scorer from the center ice position, with the smarts to augment an elite finesse game. He’s very good around the net, using his quick hands and keen vision to create multiple opportunities without the benefit of time or space. Slight of frame, Steel relies on his first-step quickness and acceleration to distance himself from opposing checkers. He keeps his head up as he blasts through the neutral zone, cutting, curling and shifting in order to maintain possession. He doesn’t like to get hit, but plays a feisty enough game to get involved as long as he doesn’t have to pay a heavy price along the boards.

A power play specialist with a penchant for delivering in the clutch, Steel has a very good shot that he wires hard off the pass or off his back foot. He simply doesn’t use it enough, but he gets a mulligan when you consider he uses common sense more than constantly deferring to the shot or pass on first impulse. He plays in all situations and can be groomed as a realistic two-way option for the pivot.