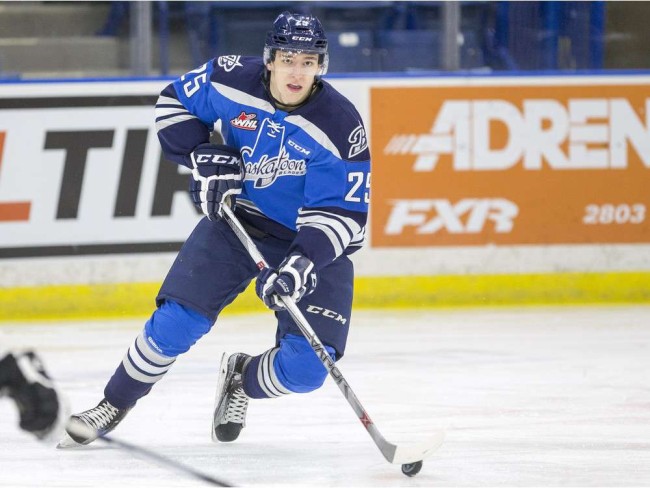 Position: Defenseman
Shoots: Left
Height/Weight: 6’2, 196 lbs
Born: February 4th, 1998 Smrcek, Czech Republic
Obtained: Selected by the Saskatoon Blades in the first round (2nd overall) in the 2015 CHL Import Draft, June 30th, 2015.
Notes: 2015-16: Finished sixth in scoring among WHL rookie defensemen with 26 points in 69 games…Tied for team lead in defense scoring with Nolan Reid…Represented the Czech Republic at the 2016 IIHF under-18 world championship, picking up two assists in five games…Played for Team Orr at the 2016 CHL Top Prospects Game…Named Saskatoon’s Player of the Month for November…Registered a career-best three points (a goal and two assists) in a 4-3 overtime win at Kootenay on October 23rd…Picked up an assist in for games for the Czech Republic at the 2015 U18 Ivan Hlinka Memorial Cup…2014-15: Split the season between Brno’s U21 team and their Extraliga squad…Recorded an assist in five games at the 2014 U18 Ivan Hlinka…Scored a goal in five games at the 2015 U18 world championship.

Libor Hajek’s game is simple – find the puck, get the puck, move the puck. Sounds pretty easy, doesn’t it? Well, there aren’t many defenders anywhere, let alone teenage draft-eligibles, who can be counted on to do all three with consistency. Hajek had the misfortune of playing smack in the middle of a Saskatoon rebuild where the ice was routinely tilted towards his own end. To call his nightly efforts valiant would be an understatement – he was a man on an island for long stretches, to include the Czech Republic’s nightmarish performance at the recent U18 world championship.

Hajek converts speed into power in either direction, using athleticism and sound judgment to attack openings or create them himself. He has a decent first step for a big guy, yet only requires a few strides to reach top speed. If you see open ice ahead of you, better make it quick, as Hajek will chase you down and smother the puck with relative ease. His positioning and slot coverage are excellent, and rarely is he guilty of wandering or puck gazing. You can make the argument that Hajek is the draft’s best defender from his own goal line to center ice. Offensively, he’s a good passer with a decent shot, and uses his wheels to make creative plays. He plays a smart and poised two-way game, and should be groomed for the top pairing.