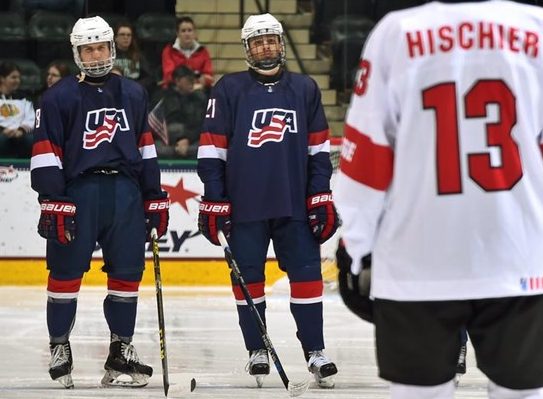 Position: Defenseman
Shoots: Right
Height/Weight: 5’10 179 lbs
Born: February 17th, 1998, Jericho, NY
Obtained: Joined National Team Development Program on April 8th, 2014…Committed to Harvard University (ECAC) on April 11th, 2013.
Notes: 2015-16: Led NTDP defensemen in goals (9), assists (50), points (59) and finished third in team scoring…His 0.97 points-per-game average and 59 points set an NTDP single-season record for blueliners…Named Top Defenseman at the 2016 IIHF under-18 World Championship after he led all rearguards in scoring with a goal and eight assists for nine points in seven games…Did not register a point in four games at the U18 Five Nations Tournament in Rauma, Finland in February…Led defensemen in scoring with seven points (all assists) in four games at the U18 Five Nations Tournament in Monthey, Switzerland in November…Played for Team Roenick at the 2015 All-American Top Prospects Game…2014-15: Placed second among Team USA defenseman with 23 assists and 27 points in 54 games…Did not record a point in four games at 2014 U17 Five Nations Tournament in Russia…Had two assists in six games as Team USA finished second at the 2014 World U17 Hockey Challenge…Had three assists in four games for Team USA at the 2014 U17 Four Nations Tournament in Ann Arbor, MI…Selected by the Kitchener Rangers in the eighth round (142nd overall) in the 2014 OHL Priority Selection…Selected by the Des Moines Buccaneers in the 21st round (303rd overall) in the 2013 USHL Draft.

A terrific playmaker from the back end with first-class vision and elite puck distributing abilities, Fox was Team USA’s most consistent defender. He is yet another Nassau County native to grace the NTDP’s blue line, using flair, creativity and astonishing puck control to wow onlookers and dizzy opponents all at the same time. He was beyond deserving of his nomination as top defenseman at the U18 worlds, which shows how far this kid has come since the start of the season when he was considered (and assessed) as merely a power play specialist. Nothing could be further from the truth, as Fox usurped fellow NTDP rearguard Chad Krys as Team USA’s best overall defenseman and most reliable at generating offense.

Fox is a good skater who looks far more graceful in confined spaces than he does in open ice. His lateral movement and edge work are excellent — his twirls and pirouettes are strikingly similar to the way Ottawa star defender Erik Karlsson controlled his puck movement while playing for Team Sweden in his pre-draft years. Fox has an accurate shot that does not require velocity to beat a goalie clean in any of the corners, and he can juke and fake his way into prime scoring areas with relative ease. He is far from physical, and falling below the six-foot mark could work against him as his development path takes him through the bigger, thicker forwards. That being said, he ran the gauntlet of NCAA competition with significant success, as even the most mature NCAA opponents could not find an answer to his puck wizardry.