IIHF U18 World Championship: Day One 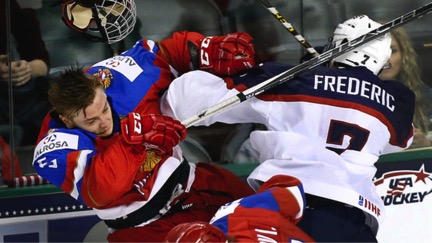 Grand Forks (The Draft Analyst) — The United States opened defense of its under-18 world championship with an 8-2 rout of Russia. But don’t let the score fool you – the game was tied 2-2 late in the second period until the Americans exploded for six unanswered goals. Meanwhile, Finland’s strong entry gave up a two-goal lead late to the stingy Czechs before outlasting them for a 4-3 shootout win. Switzerland scored a 5-4 win in overtime against Latvia, and Slovakia edged Denmark by the same score. You can find box scores and lineups here.

Center Clayton Keller (Ranked No. 13): Keller took his regular spot on Team USA’s top line, and the star pivot delivered, registering two goals and an assist, and winning 11 of 16 in the dot. He was all over the place – darting and weaving around Russia’s inexperienced defenders, picking off passes and identifying untenable schemes. He exploded up the ice for the game’s opening score, taking a bullet stretch pass from Adam Fox (more on him later) and rifling a wrister home. He’s carried the offensive load for the U.S. all season, but don’t forget how clutch he was to last year’s stacked squad which took home gold.

Center Logan Brown (Ranked No. 17): The Americans should be grateful that this top draft prospect has dual citizenship, because he not only fills a void on their roster, but he’d create a matchup nightmare had he played for Canada. Nevertheless, Brown was too much to handle for most of the teenage Russians, and he had a handful of solid looks before wiring in a one-timer during garbage time. The 6’6 behemoth moves so well for such a towering figure, and he displayed his vision and touch with a soft lead pass to a streaking Kailer Yamamoto for a power play goal.

Right wing Kailer Yamamoto (2017 eligible): Yamamoto is the sublime offensive talent who’s been shredding the WHL for Spokane. Both he and fellow 2017-eligible Casey Mittelstadt showed good chemistry (they were teammates at the U18 Hlinka last August), and his quick-strike mentality is something this year’s NTDP lacked in terms of it support scoring. He’s not very big (5’8/160), but he makes up for it with speed, quickness and escapability. Yamamoto finished with a pair of goals and two assists, and his performance was reminiscent of what Keller did for Team USA a year ago in Switzerland.

Defenseman Adam Fox (Ranked No. 64): We’ll go on record and state that the Long Island native is the best defenseman on Team USA, and has been for quite some time. A wonderful skater with elite passing abilities, Fox is a cool customer under pressure, and his home run pass to spring Keller for the opening goal was just one example of his over two dozen notable plays on the night. This kid can thread the needle with authority while skating backwards or sideways – a rare gift not often found in teenagers. He’s committed to Harvard, but don’t forget that Kitchener in the OHL owns his rights.

Right wing Eeli Tolvanen (2017 eligible): Speedy whirling Dervish with an explosive first step and sick set of hands. Tolvanen is one of several highly-skilled Finnish forwards who is wise beyond his years. He starred for Sioux City this season, and his production (38 points in 49 games) put him in an elite group of recent USHL under-17 stars like Kyle Connor, Kieffer Bellows and Keller. Tolvanen is 5’10, 174 pounds, but he can bring it with a heavy shot from either forehand or back. He scored a nifty goal off a rush down the wing, lifting the puck under the bar from practically the goal line. Tolvanen also added an assist and finished with a game-high seven shots.

Center Aapeli Rasanen (Ranked No. 52): This is the fifth tournament we’ve viewed where Rasanen was participating, and we simply can’t get enough of this two-way wizard. There’s some serious potential there, and the best part is that he didn’t even factor in the scoring. Rasanen was a beast on the penalty kill, using a non-stop motor and active stick to cause confusion and uncertainty during a lengthy Czech five-on-three. He won 20 of 27 draws (74%) and blocked a handful of shots.

Right wing Eetu Tuulola (Ranked No. 97): Either he’s playing with a sense of urgency or working with a skating guru (or both), but this power forward looked a bit quicker against a pretty loose Czech zone defense. This is one big boy – 6’3, 227 pounds – who with one shot can destroy the puck, his stick, skates, the goalie…whatever. His handling of the puck and confidence while bombing through the neutral zone seems to have improved. Tuulola picked up an assist and had three shots.

Left wing Juha Jaaska (Ranked No. 150): Speedy and strong two-way forward who impressed with his compete level, which is why he’s always stood out. Jaaska plays without fear, and he’s at his best when taking the puck strong to the net. He kills penalties extremely well, but there’s more to his game than responsible play. Jaaska is a victim of circumstance, as Finland’s scoring depth is the greatest it’s been in years. There’s a good bet he’d flourish with an expanded role.

Center/Right wing Samuel Solensky (Ranked No. 172): Diminutive force who captains a thin Slovak squad in terms of 1998-born draft eligibles. Make no mistake; he plays alongside talent. However, he’s been Slovakia’s go-to guy for the last few tournaments dating back to the Hlinka, so it shouldn’t come as a surprise he was named player of the game, finishing with a pair of goals and a plus-3. Solensky’s balance improved since we last saw him, but he played against Denmark, so we’ll see how he handles bigger bodies.

Center Kristian Reichel (Ranked No. 72): Reichel didn’t have a strong game, let alone a dominant one, and there were times when he looked indecisive – a rarity for someone we’ve been tracking since the Hlinka. He’s a playmaking pivot who’s generally low maintenance, but he seemed to be fighting it against structured Finnish coverage. He’s a competitor, nonetheless, and he combined with possible first rounder Libor Hajek for a textbook zone entry, creating time and space for Hajek to find Filip Zadina (2018 draft) in the slot for a goal.

Defenseman Libor Hajek (Ranked No. 31): With his strong rookie campaign for the rebuilding Saskatoon Blades now complete, we got a chance to see Hajek on the international stage for the first time since the Hlinka. He was on the top pairing at both even strength and for special teams situations, displaying smoothness and reliability in the face of a relentless Finnish forecheck that kept the Czechs pinned in their zone for long periods. Hajek knows when to attack and when to stay back, and he played it far safer once he realized the Finns were carving up the Czech forwards with pressure. We’re expecting a big tournament from him.