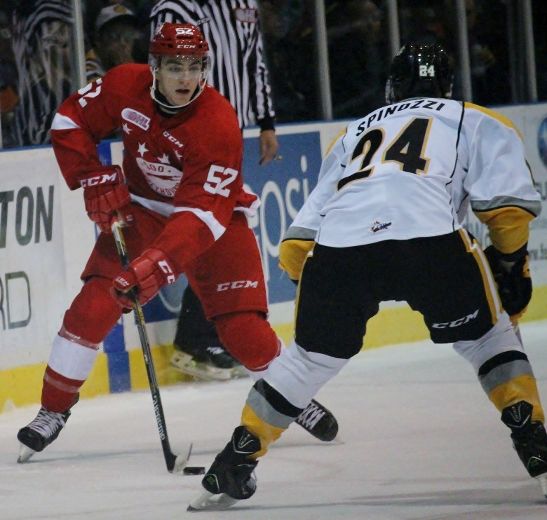 *91. G Mikhail Berdin (Russia U18, MHL): It’s been a banner year for both of Russia’s U18 netminders, but Berdin holds a slight edge over teammate Vladislav Sukhachyov because he has kind of size (6’2.5) and calmness fit for today’s pro game. He was outstanding the World Junior “A” Challenge in December before having a minor hiccup against Finland at the recent U18 Five Nations.

92. RW Tobias Eder (Bad Tolz, DEL): The flower of Germany’s development program who tore up the competition in Slovakia at the recent Vlado Dzurilla U18 tournament. Eder preys on mistakes and loves to take the puck up the ice with confidence and authority. He’s got good size, a soft set of hands and a very good shot.

93. C Mikael Hakkarainen (Brookings, NAHL): A big, two-way center with tremendous vision and playmaking abilities off the rush, the Providence-bound Hakkarainen is a safe pick with loads of potential. His stock should rise after a strong performance for Finland at the U18 Five Nations.

94. RW Ty Ronning (Vancouver, WHL): The Oilers don’t have to look too far to stock up on goal-scoring wingers, as the diminutive Ronning continues to carry the offense for the WHL’s Vancouver Giants with injured star Tyler Benson on the shelf. Ronning may not be as fast as father (and former NHL’er) Cliff Ronning, but he’s a tireless worker who have elite goal-scoring instincts.

95. G Veini Vehvilainen (JyP, Liiga): Remember that Finnish goalie who was torched by Canada before being pulled at the recent WJC’s? Well, neither do we, as Vehvilainen has produced an outstanding rookie Liiga season, taking over the starting role and leading the circuit as a 19 year old. He’s got good size and athleticism, and made clear adjustments to his net awareness upon returning from Helsinki.

96. C Trent Frederic (US U18, NTDP): Dependable two-way power center with a fierce competitive nature who doesn’t receive the accolades deserving of being the NTDP’s second line pivot. He plays on both the power play and the penalty kill, where he’s the top option and key faceoff taker. The St. Louis native is heading to the University of Wisconsin in the fall.

97. LHD Dmitri Alexeev (Russia U18, MHL): One Russia’s better 1998-born defenders who logs big minutes and is used on all situations. He serves at the team’s alternate captain, and he is one of their most consistent blueliners at taking the right route and sealing off avenues of approach. Alexeev has very good mobility and plays with his head on a swivel, and his size (6’1, 192 pounds) makes him the ideal candidate to groom for Vancouver’s top-4.

98. RW Eetu Tuulola (HPK U20, Liiga Jrs): Tuulola is a big kid with decent speed and a heck of a shot who can’t seem to crack Finland’s top line during international play. We really like his aggressive mentality and activity on the forecheck, but in reality, he’s going to make his money potting one-timers and crashing the crease. He was a non-factor in his brief Liiga promotion, but a top-6 spot on Finland’s U18 Worlds’ team should be in the offering.

99. LW Travis Barron (Ottawa, OHL): Barron was the third overall pick of the 2014 OHL Priority Selection, but the lack of production in his draft year (28 points in 49 games) is a bit misleading. He’s a two-way power winger with a strong work ethic and compete level while playing involved in all three zones, and we think there’s a promising center/wing close to breaking out.

100. RW C.J. Dodero (Sioux City, USHL): Another mobile power forward who can wire a heavy shot and plays an in-your-face style. He recently committed to the University of Denver, where he’ll join an impressive incoming class. His numbers aren’t great (eight goals in 43 games), but then again, the Musketeers are one of the USHL’s worst offensive teams.

101. C/RW Igor Shvyrev (Stalnye Lisy, MHL): Wonderful offensive talent with excellent speed who has the ability to make finesse plays while rocketing up the ice. More of a playmaker than a goal scorer, Shvyrev is deadly accurate with his passes and a must-have option on any power play.

*102. C Henrik Borgstrom (IFK U20, Liiga Jrs): Overage skilled center with elite passing and vision who’s been a force in Finland’s junior circuit. Borgstrom missed 2015 draft eligibility only by a few weeks, so calling him an elder prospect is a bit misleading. Still, his upside offensively is sky high, and could be added to a growing list of Rangers late-round gems.

103. C/LW Mitchell Mattson (Grand Rapids, HS-MN): A finalist for Minnesota’s Mr. Hockey and North Dakota commit who hightailed it out of the USHL to return to his old high school circuit. The 6’4 Mattson is an intriguing power forward prospect nonetheless, one who can change the nature of the game with one play. He plays in all situations and can also be developed as a top-line center.>

*104. C/RW Patrick Bajkov (Everett, WHL): Two-way sparkplug who at times can be the best player on the ice. He has a very good shot and is equally adept and not only reading plays, but creating situations where he has multiple options. We still can’t figure out if he should be classified as a goal scorer or a playmaker, which can be construed as either a good thing or bad.

105. LW Jack Kopacka (Sault Ste Marie, OHL): Kopacka was one of several high-profile Greyhounds who have turned up the intensity since December, allowing evaluators to get a real sense what he’s capable of doing. The Michigan native earned a spot at the CHL Top Prospects Game, but with 10 goals in his last 25 games as a depth forward, it’ll be his OHL play which gets him the credit he deserves.

106. C Grant Jozefek (Lincoln, USHL) : Dynamic offensive wizard who is one of the USHL’s top scorers but is at his best when he’s controlling play in the opposing zone. Jozefek has flair and creativity, and almost fools you into thinking his size makes him an easy target. He’s headed to Northeastern in the fall.

107. G Adam Brizgala (Sparta Praha U20, Extraliga Jrs.): Wide-bodied netminder who popped up on the radar at the U18 Ivan Hlinka last summer and played very well at the December U18’s. He’s dealt with an injury off and on, so it’s always a concern heading into the draft stretch run. Still, goalies take a while to develop anyways, and the Av’s can grab one of the better ones early in the fourth..

108. C/W Tanner Kaspick (Brandon< WHL): Gritty two-way forward who returned with a vengeance following a lengthy absence due to an undisclosed upper-body injury. He was one of Brandon’s better forwards before sitting out, which says something when you consider how deep a team the Wheaties are. Take our word for it: if he ever develops into a top talent, he most certainly deserves it.

109. C/LW Marco Miranda (GCK Lions, NLB): Switzerland’s had a rough year on the international stage, but Miranda has been one of their bright stars during relatively difficult times. He’s a big forward with a soft touch and an array of moves to beat you, and he’s ensconced on the Lions’ top line with a promotion to the senior National League a serious possibility.

110. LHD Max Lajoie (Swift Current, WHL): Graceful offensive defenseman who rebounded from a dreadful start with one of the CHL’s better runs in terms of point production (17 points in his last 17 games). Defending his territory is always an adventure, but he makes up for it with keen vision, and lengthy tape-to-tape breakouts.

111. C Ondrej Najman (Dukla Jihavla U20, Extraliga Jrs.): Najman is a set-up pivot who had a decent U18 Five Nations against some stiff competition. He gets somewhat shafted in minutes and opportunities behind Kristian Reichel, but he’s a quality two-way center with finishing abilities nonetheless.

112. LHD Dennis Cholowski (Chilliwack, BCHL): Leading defenseman for one of the BCHL’s top teams who appeals to many for the way he handles pressure and jumpstarts the offense. He doesn’t have history on his side, however, as the quality of the last two dozen defensemen selected from the BCHL since the 2001 draft is collectively marginal at best. The Bruins do have an excellent track record at developing defensemen so this pick makes sense in a manner of ways.

113. LW Carsen Twarynski (Calgary Hitmen, WHL): Another member of the Hitmen’s rebuilding process who immediately earned coach Mark French’s good graces by scratching and clawing his way into every point he’s earned. Twarynski is a classic power forward, but he keeps it clean while playing engaged, especially on the power play.

*114. LHD J.D. Greenway (US U18, NTDP): Greenway is a mobile defenseman with size and a massive wingspan who stays within himself and doesn’t try to be flashy or irresponsible. He has a long stride and occasionally jumps into the play, and when he does, he’s displayed a soft touch and above-average vision. He’s extremely raw but has enough upside to allow the Sharks to play the long game.

115. LW Tim Wahlgren (MoDo, SHL): Swedish winger with good size and enormous hockey sense who can play either side. He’s been buried on recent rankings but continues to climb, especially after a clutch effort for Sweden at the U18 Five Nations and scoring his first career SHL goal.

116. LW Graham McPhee (US U18, NTDP): Boston College-bound two-way forward with a strong work ethic and durability. McPhee won’t dazzle you with any specific skill, nor is he leaned on to provide offense to a relatively thin NTDP roster. But his aggressive, hard-charging mentality and ability to kill penalties is what makes him both a safe pick and one with bottom-six potential.

117. LHD Kristians Rubins (Vasteras J20, Superelit): Latvian monster who’s dealt with an unfortunate injury bug after showing promise a season ago. He missed out on the WJC’s but is back for Vasteras working his way back up to their top pairing. If he can stay healthy, he’s an impossible defender to get around and has a booming shot for him to use on the power play.

118. G Vladislav Sukhachov (Russia U18, MHL): With his heroics against Canada in last summer’s Hlinka somewhat of a distant memory, Sukhachov turned in a similar door-slamming performance against the Americans in February’s U18 tourney in Finland. He’s not very big, but he makes up for it with some serious reflexes and quick in his crease movements. Both he and Berdin are in a dogfight to earn the starting job in Grand Forks for the U18’s.

119. C Cameron Hebig (Saskatoon, WHL): Hebig’s terrorized the WHL since the season began, and we think it’s because he was mistakenly left out of the 2015 draft party. You have to witness how deplorably bas Saskatoon is to truly appreciate the numbers he’s put up (54 points in 46 games), and if he had some decent support, the numbers would be more impressive. He’s quick and busts his tail every shift, but his vision, stickhandling and hands should most certainly be classified as strong.

120. LHD Ilya Karpukhin (Russia U18, MHL): Karpukhin earned his way onto the Russian U18 power play after a strong showing at the WJAC two months ago, and we put him in a long line of National Team defenders whose real skill and ability to create from the backed are stifled by loaded forward lines. He’s a hard passer and good skater who likes to attack only when the situation makes sense.

*The New York Rangers own Arizona’s 2016 fourth round pick from the Keith Yandle trade.

*Calgary owns Nashville’s 2016 fourth round pick (conditional) from the Max Reinhart trade. The condition was the pick transferred when Reinhart signed with Nashville and cleared waivers.