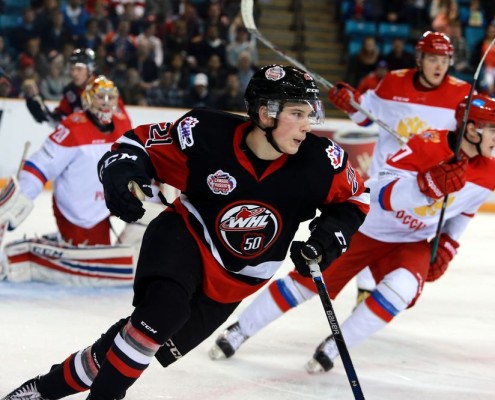 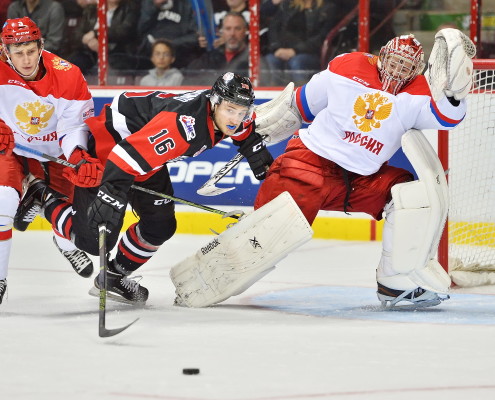 Photo courtesy of the Windsor Star 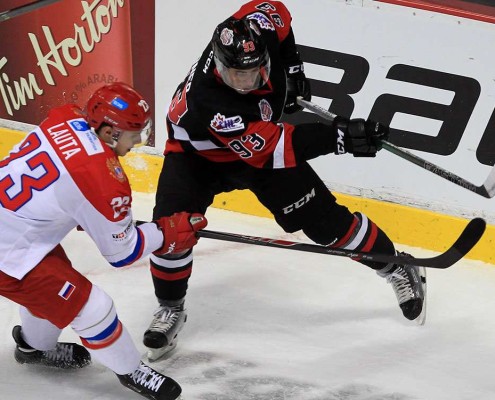 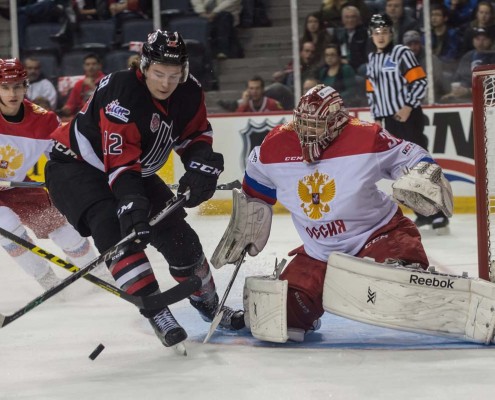 The Draft Analyst — The Western Hockey League earned a pair of victories over a travel-weary Russia squad, beginning with a 7-3 thumping on November 9th in Kelowna. Brandon defenseman Kale Clague opened the scoring just 2:16 into the competition’s opening period, beating goalie Maxim Tretiak with a tricky shot from the left point. Everett blueliner Noah Juulsen upped Team WHL’s lead to 2-0 in the first with a nice rush to the net, and Moose Jaw star Brayden Point began a four-goal onslaught in the middle frame with a nice cut to the middle and shot through Tretiak. Kamloops left wing Collin Shirley finished with a goal and three assists, and Point with a goal and two helpers.

Team Russia played a structured game the following night in Kamloops, responding to a 1-0 deficit in the second period with goals from Regina defenseman Sergei Zborovskiy and Yegor Yakovlev. But Kamloops Blazers’ wing Deven Sideroff tied the score immediately thereafter off a turnover by Russian left wing Artur Lauta. Seattle center Matt Barzal then feathered a pass over to a streaking Sideroff for his first tally of the competition. The score remained even late into the final period, but Brandon pivot Jayce Hawryluk darted through some open ice and ripped a shot past Tretiak for a 3-2 lead the WHL would not relinquish. Brett Pollack scored an empty net goal to complete the two-game sweep for the WHL, which lost both games to Russia a year ago.

The Ontario Hockey League continued its Super Series dominance over Russia with a pair of hard-fought victories over an opponent who performed far better in Ontario than they had previously displayed a few days earlier in Western Canada. Still, neutralizing the kind of talent the OHL presented in either of the two contests would pose a daunting task for almost any roster, and it took Kingston left wing and Los Angeles Kings’ draftee Spencer Watson only 34 seconds to put the OHL out in front for good. Erie center Dylan Strome (Arizona) was assertive the entire match, using his elite awareness and hockey sense to continuously create plays. His wrist shot from the right circle off an odd-man rush zipped past a helpless Maxim Tretiak with just seconds remaining in the opening period to give the OHL a 2-0 lead. Watson closed out the scoring with another goal in the late stages of a period, banging home a rebound with 20 ticks left in the second to give the OHL a 3-0 bulge heading into the final 20 minutes. Barrie goaltender Mackenzie Blackwood, a Devils draft pick, stopped 25 shots for the shutout.

The OHL had a tougher time in their second and final game with Russia, which took a 1-0 lead  before the midway point of the first period on a power play goal from right wing Kirill Pilipenko. The skilled winger showed great hands and coordination when he banged home a hard centering feed from center Daniil Vovchenko during a 5-on-3. Team OHL would dictate play for the remainder of the contest, beginning with a hard-working goal 2016 draft eligible winger Jordan Kyrou, who was relentless on the forecheck to force a turnover and backhand a feed to defenseman Kyle Capobianco (Arizona) for a shot which was kicked out to the slot for Kyrou to slam home and tie the score 1-1. Watson scored the eventual game winner on the power play a few minutes later, taking a feed from Mitch Marner (Toronto) in a congested slot and snapping one past Alexander Trushkov for a 2-1 lead.

The OHL’s rosters for both games were top heavy on experience, so 2016 draft eligibles Taylor Raddysh (Erie), and Mississauga’s duo of Mike McLeod and Nate Bastian were relegated to fourth line duty in Game One against Russia. And while all three didn’t register a point in what was their lone appearance in the tournament, the physical trio made the most of their limited ice time by grinding down the Russians with a hard and heavy forecheck; especially Bastian, who along with Raddysh flanked the playmaking McLeod. All three will likely be picked within the top 50 or so picks in the NHL Entry Draft, with McLeod a potential lottery pick.

In terms of 2016 draft prospects involved in the second game, the likes of the aforementioned Kyrou, Flint center Will Bitten,  and defensemen Victor Mete (London) and Jakob Chychrun (Sarnia), the latter being considered as the top defenseman available for the 2016 Entry Draft. All four played with a sense of urgency since minutes on such a deep roster were scarce, but only the forwards provided an impact with a handful of their respective shifts. Both Mete and Chychrun looked to play it safe, which from a defensive standpoint is all you could ask out of a first-year draft eligible on a veteran roster.

The QMJHL players may have looked stunned and in disbelief after losing 3-2 to the Russian on November 17th in Rouyn-Noranda, but it certainly was not from a lack of effort. The Quebec Leaguers pressed and attacked from start to finish, making Russia look very much like the tired team people expected them to resemble. But a seeing-eyed shot from the point early into the game, and a weak wrister from the left circle later on in the period, eluded goalie Samuel Montembeault (Florida) to give Russia a surprising 2-0 lead late in the opening stanza. Team QMJHL battled back to tie the score on a late goal from Anthony Richard (Nashville) in the first period, followed by a second-period strike from Nicolas Roy which was set up masterfully on the power play by quarterback and 2016 first-year draft eligible Samuel Girard. The game only remained tied for just under three minutes, however, as right wing Arkhip Nekolenko stripped the puck away from an overzealous Girard and lofted a pop fly to a streaking Artur Lauta, who rushed down the right wing and snapped one high over Montembeault’s exposed glove side to give Russia the lead for good. Truthfully, the QMJHL deserved a better outcome, as they were crisp with their plays and aggressive in all three zones while outshooting the Russians, 33-20. The play of 2016 draft prospect Julien Gauthier was significant in that he showcased an arsenal of ways to beat you. And although he did not factor in the scoring, he displayed the kind of tenacity and hockey sense which can make one think the ease of his ways means he’s simply a man amongst boys.

Game Two began as a disaster for the Russians, as Bruins draftee Jeremy Lauzon hammered one in off a clean faceoff win for a 1-0 lead just three minutes in. Gauthier was stopped on a clean breakaway by Maxim Trushkov, but right wing Nicolas Aube-Kubel, a Flyers draft pick in 2014, one-timed a cross-ice feed from Ottawa Senators’ prospect Francis Perron to up the QMJHL’s advantage to 2-0. A goal by Mathieu Joseph (Tampa Bay) ended Trushkov’s evening, and Anthony Beauvillier (New York Islanders) greeted Tretiak with a stoppable shot from the left circle the latter simply whiffed on as the Q’s lead ballooned to 4-0. Russia would battle back, however, as the line of Yakov Trenin (Nashville), Evgeny Svechnikov (Detroit) and QMJHL star Evgeny Lazarev (2016 eligible) created a pair of goals for Svechnikov which made the game close. Lauta buried his third of the tournament off a draw to make it 4-3 after 40 minutes, but Team QMJHL responded with markers from Nicolas Meloche (Colorado) and Joseph again to close out a 6-4 win and help salvage a split with Russia.

RW ARTUR LAUTA (Omsk Avangard, KHL): Lauta was more of a role player for the National Team at the summer U20 Four Nations, but in Canada he elevated his game to that of a top-line performer, scoring three goals in six games. He’s very much a double-overager (February, 1996), and his KHL stats the last two seasons resemble those of a newcomer (one goal in 26 career games). But he’s got great work ethic and leadership abilities, and skates well for someone who you might mistake for a plugger. At 6’0, 190 pounds and experience against older competition, Lauta is a name we wouldn’t be surprised to hear called out in the later rounds on draft day.

LW MAXIM LAZAREV (Cape Brenton, QMJHL): Another double-overager who was surprisingly passed over despite a very productive season last year, and being the third overall pick in the CHL Import Draft. Lazarev is a highly-skilled playmaker with a bag full of moves to keep you interested. He’s been playing on a line in Cape Brenton with Detroit 2015 first round pick Evgeny Svechnikov and possible 2016 lottery pick Pierre-Luc Dubois, and through late November was one of the top scorers in the league. Lazarev has been plagued by injuries, but it would be rather puzzling if he is passed over a third straight year. He only appeared in two games – both against the QMJHL, with a three-assist effort in Russia’s lone win of the six-game series.

C ANDREI SVETLAKOV (CSKA Moscow, KHL): 1996-born puck wizard who appeared in all six games and finished with a team high three assists and four points. He was Russia’s most consistent forward, and from a matchup standpoint drew the bulk of the CHL’s top pairings. He took a nasty cross check to the face from Guillaume Brisbois in the second period of the 6-4 loss to the QMJHL in the finale, but came back without incident.

RW KIRILL PILIPENKO (Dynamo Moscow, KHL): One of Russia’s top under-20 goal scorers not playing in North America who didn’t have as strong a tournament as we thought he would, but still managed to score two goals on only three shots in five games, with his lone stopped shot coming on a breakaway save by Mackenzie Blackwood in a Game Three loss to the OHL. He’s a very tricky forward who may not have explosive moves, but his second gear is enough to catch a retreating defender off balance. He even sold a seemingly harmless hit from Francis Perron in the final QMJHL match into a power play. Pilipenko was invited to last year’s tryout camp for the same competition but failed to make the roster. Barring injury, he’s a strong candidate for the World Junior squad.

G MAXIM TRETIAK (Chekhov, VHL): We all know the background; he’s the grandson of Soviet legend Vladislav Tretiak who obvioulsy has big shoes to fill. He’s got a pro-goalie’s build (6’3/220 lbs), but his reaction time and positioning are painfully slow. Both he and Alexander Trushkov split the time between the pipes, but it was because neither would play well enough to wrestle away the lion’s share of minutes. We viewed him as a legit NHL prospect last summer, which might as well be 10 years ago when you consider how bad a year he’s had. He’s got a late-1996 birthday so he won’t lose draft eligibility until after next season. Don’t bet on seeing him in Helsinki for the WJC’s unless he’s got a ticket in the lower bowl.