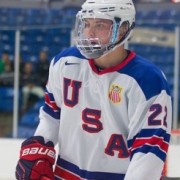 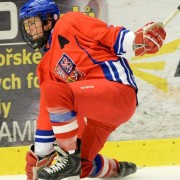 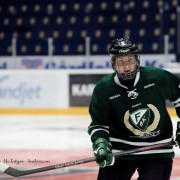 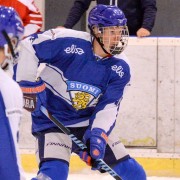 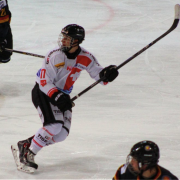 Monthey, Switzerland (The Draft Analyst) — The United States produced a dominant performance as they cruised to a perfect record at the Under-18 Five Nations tournament, held between November 4-8 in Monthey, Switzerland. Boasting a lineup strictly from its U18 National Team, the Americans beat entires from the Czech Republic, Sweden, Finland and Switzerland, which they outscored by a combined 19-6 over their four wins in round robin play. Center Clayton Keller (Boston University) led the competition in scoring with seven goals and 12 points in four games, while Adam Fox (Harvard) topped all defensemen with seven assists. Goalies Joseph Wall (Boston College) and Jake Oettinger (Boston University) each went 2-0 with a 1.50 goals against average. Left wing Kieffer Bellows (pictured – Boston University) posted a tournament-best 28 shots, and Team USA averaged a shot advantage of 49 to 18 per game. This was the eight time in nine years an American U18 team took the title of an international competition held in November.

The Czech Republic produced a consistent effort in placing second in the tournament, with a competitive loss in the opener to the United States its lone blemish. The Czechs were headed for a second defeat in as many days when they found themselves trailing Finland 2-0 after 40 minutes. But a two-man advantage  midway through the final frame began a late rally, as center Kristian Reichel (pictured) and left wing Petr Kodytek scored power play goals 67 seconds apart, and defenseman David Kvasnicka netted the game winner five minutes later in what turned out to be a 4-2 win. Reichel was the hero the following night, as his late game winning goal with the man advantage allowed the tired Czechs to edge Sweden, 2-1. They closed the tournament with a convincing 6-2 triumph over the host Swiss, with Reichel potting his team-best fourth goal and firing 11 shots on  net. Goalie Dominik Groh won the final two games for the Czech Republic, and defenseman Lukas Doudera finished in scoring among blueliners with a goal and five assists in four games. Fellow blueliner Frantisek Hrdinka chipped in with a pair of assists, including one on the power play.

Sweden sent a rather inexperienced team to Monthey, with six players not draft eligible until 2017, and their two top U18 forwards — SHL rookies Carl Grundstrom and Rasmus Asplund — in Finland at the U20 Four Nations. You can argue that Sweden was just a bounce or two away from going a perfect 4-0, with their losses to both the United States and the Czech Republic coming via late-period game winners. The Swedes ended the competition on a high note with a convincing 5-1 rout of rival Finland, with 17-year-old right wing Lias Andersson leading the way with two goals and an assist. Andersson tied with center Oskar Steen (pictured) for the team lead with six points in four games, and left wing Jesper Bratt produced two goals, two assists and 15 shots. The duo of Filip Gustavsson and Filip Larsson each went 1-1 with 50+ shots faced.

Finland was easily the competition’s most disappointing in terms of what was expected and what actually happened. While the Finns’ Under-18 talent pool was hit hard by both North American defections (Olli Juolevi, Markus Niemelainen, Oliver Felixson, Otto Somppi), and the U20 Four Nations inundating their two best amateur players — Patrik Laine and Jesse Puljujarvi, they can still ice very competitive amateurs. What happened in Momthey, however, was disconcerting to say the least, and not for the losing, but the manner in which Finland lost. In four games, the Finns were outshout 170-111, and surrendered 45 shots or more in all three of their losses en rout to finishing a paltry 1-3. Their lone victory came at the expense of winless Switzerland, which Finland hammered 8-3. Not all news was bad, however, as 2016 draft eligibles Otto Makinen (pictured – nine points, plus-5) and Janne Kuokkanen (five points, plus-4), and 2017 draft prospect Emil Oksanen (seven points) worked together to help their country depart Monthey with a little bit of dignity. And from the “Nobody Ever Said Life Is Fair” department — goalie Severi Isokangas posted .910 save percentage and a 6.37 goals against average.

Not much was expected out of the host nation’s submission for this annual tournament, and Switzerland found itself winless and in last place when it was completed. Saying the Swiss were completely overwhelmed is the best way to describe their effort, and the 49 to 22 average shot disadvantage should in itself be enough to validate it. Their uphill climb from the opening whistle of play was likely a byproduct of not having the horses to contain, and the best way we can put a positive spin on a being outscored by a four to one margin is that goalies Leo Chuard and Andrin Seifert were given plenty of opportunities to work on any of several puck-stopping techniques they wanted. Both center Marco Miranda (pictured) and left wing Dominik Volejnicek did their best to generate chances by making whatever little they had, and left wing Kaj Suter led the way with 13 shots on goal. Defenseman Livio Stadler, who earlier in the season was promoted up the NLA senior league, failed to produce and point and tied for a team-worst minus-seven.