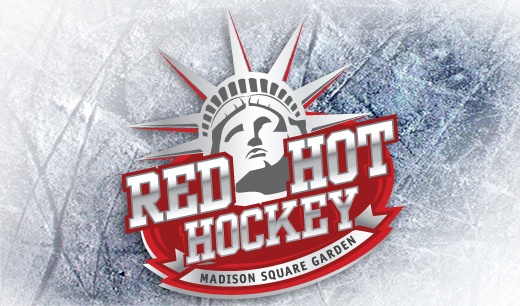 Boston University (7-4-3) out-dueled Cornell (6-1-2) in the ensuing shootout to earn the Kelley-Harkness Trophy and claim their second straight win over Cornell in the Red Hot Hockey competition. The game will count as a tie in the standings for both schools, and the Terriers improved to 3-0-2 since the competition was organized in 2007.

Greenway, a second round pick of the Minnesota Wild in last June’s NHL Entry Draft, used his size and strength to cut to the slot and get a shot on net, then jammed home a rebound past Cornell goalie Mitch Gillam on a follow-up shot by defenseman Matt Lane, tying the score 3-3.

Boston University dominated the final period and overtime, outshooting Cornell by a combined 22-6 and scoring all three of its goals in the third to erase deficits of 2-0, 2-1 and 3-2. Sophomore left wing A.J. Greer, a second round pick of the Colorado Avalanche, began the Terriers’ third-period comeback from 2-0 down with a nifty pass to Bobo Carpenter, who rifled one past an outstretched Gillam. Greer tied the score 2-2 a few minutes later when he took a feed from Nikolas Olsson and wristed a shot home from the left circle.

The Big Red jumped out to a 2-0 lead on the strength of a power play goal in the first period from freshman Anthony Angello, a Pittsburgh Penguins draftee, followed by a tally in the second from left wing Trevor Yates. Junior defenseman Holden Anderson temporarily gave Cornell a 3-2 lead after his shot trickled past sophomore goalie Connor LaCouvee, but Greenway’s goal five minutes later forced the extra session.

Gillam made 40 saves for Cornell, and LaCouvee finished with 22 stops for the Terriers.

Photo courtesy of the Ithaca Journal 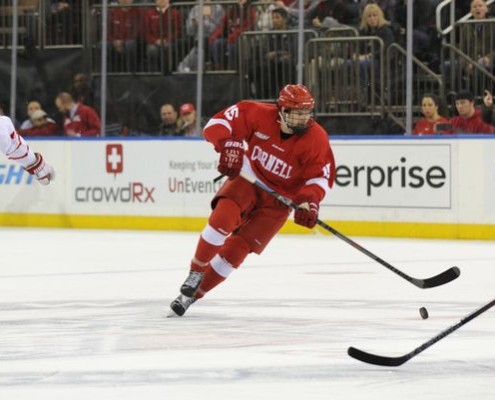 24 – LHD RYAN BLISS (2016 Draft Eligible/1996): Reliable sophomore defender who was rock solid for the NTDP, where he was partnered with Terriers blueliner Jonathan MacLeod before stuck with family tradition and enrolled at Cornell. We observed a ton of maturity and patience in his game, helped on by quick feet and advanced gap control. Bliss is extremely mobile and can close on an opponent in a hurry, and an active stick was just part of his process to fix the puxk rusher into a point of no return. He played the right point on the power play, where he displayed a low, hard shot and a soft touch when feathering passes over clogged lanes and onto a teammate’s tape. On one occasion, Boston University shamelessly trapped with a 2-1-2, presenting Bliss with his entire defensive zone to skate through. He opted for the smarter play, outwaiting the static pressure until a gap opened, where he caught a teammate in stride at the red line for an eventual odd-man rush. He’s perfectly built for the position (6’1/200 lbs), and reminds of a young Marc Staal.

32 – G MITCH GILLAM (UDFA/1992): Acrobatic and focused netminder who faced a barrage of chances in bunches to help the Big Red take the lead and then salvage the tie. Gillam has decent size (6’0/182) but will challenge the shooter no further than the absolute top of the crease. His post-save recovery bailed out some of his snoozing defenders on a few occasions, and he kicked all his rebounds away from the slot. Gillam, a junior from Peterborough, Ontario, is off to a fantastic start this season, as his shutout streak of close to 215 consecutive minutes was snapped by Bobo Carpenter’s goal early in the third. He was named the ECAC Player of the Week before the game at MSG, and in 2013 was a finalist for the RBC CJHL Player of the Year after a stellar career with the BCHL’s Chilliwack Chiefs.

17 – RW ANTHONY ANGELLO (PIT 5th/2014)): Freshman power forward from Central New York who’s really blossomed into a top-line threat thanks to a penchant for scoring big goals. He’s one of the nation’s more productive first-year goal scorers with six in 11 games, and his 0.55 goals-per-game average ties him for third. He was pretty active against Boston University, but only for the game’s first half as the Big Red really sat back and allowed the Terriers to dictate the tempo. Angello has an excellent shot, but his tip-in goal was more indicative of his offensive instincts, as he squared up to the shooter and made sure he had seperation from the defender in the low slot. He’s a rugged player who took a fearless approach when he stepped on the ice, but he was sucked into his team’s collective apprehension in trying to break through BU’s defensive wall.

11 – LW TREVOR YATES (UDFA/1995): Another one of Cornell’s big-bodied wingers who was giving the smaller Terriers defenders trouble in the dirty areas around the goal. A Quebec native whose dad Ross was the head coach of the QMJHL’s Saint John Sea Dogs, the 6’2 forward burst through the neutral zone and completely undressed BU defenseman Doyle Somerby (NYI) for a clean break LaCouvee stopped, only to see Yates circle back into the crease and stuff in the loose puck. We really like his powerful stride and the way the puck seems to find him when he’s entrenched in the low slot. Yates is a product of Deerfield but was relatively unheralded coming out of the prep circuit. 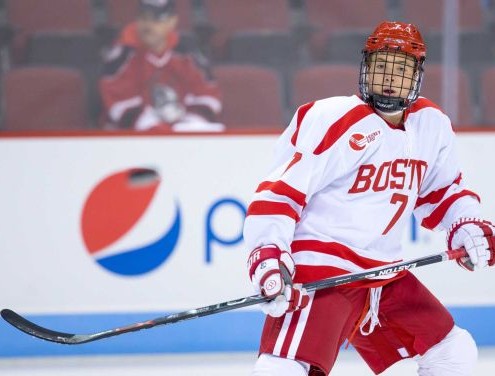 7 – RHD CHARLES MCAVOY (2016 Eligible/1998): One of the bigger names involved in the competition, McAvoy has been asked to fill the void left by team captain Matt Grzelcyk, who has been bothered by separate knee injuries since he underwent off-season surgery. McAvoy, one of the NTDP’s better two-way defenders a year ago, looked more like a one-dimensional player against the Big Red, as he did not kill penalties, lost his man in coverage a few times with his back turned, and seemed to struggle with his decisiveness more than half the time. He was charged with running the power play, but acquiesced far too many times and even fumbled an easy set up. McAvoy also needed to shoot off the pass on several occasions, and his best chance during the man advantage turned into an easy save when he waited too long to tee up a shot from the left circle. The good news is that he made several game-breaking plays, including a beautiful end-to-end rush and wraparound chance at the buzzer, and his patience with the puck initiated the goal scored by Carpenter. McAvoy displayed excellent mobility and acceleration, but we wouldn’t classify him as explosive with a quick first step. His final stat line read one assist, three shots on goal and plus-1, and keeping the Long Island native’s overall performance in perspective, we think he played like any NHL first-round prospect would. There’s certainly star potential there.

25 – LHD BRANDON FORTUNATO (2016 Eligible/1996): Another Nassau County kid on BU’s backline, only Fortunato is a double-overage sophomore who had the strongest game with the puck among his defense corps. He’s in a similar draft situation as Swedish rearguard and fellow 1996’er Sebastian Aho in that both are immensely crafty and skilled with the puck, but a slight frame (Fortunato only weighs 150 pounds) seems to scare everybody away. Well, we don’t align ourselves with that point of view, as the kid we saw at the Garden was anything but a liability. Fortunato played with extreme confidence throughout the contest, darting in and around opponents, stepping up at the right time and displaying a very quick first step. This wasn’t much of a surprise, as he led his respective U17 and U18 squads with the NTDP in defenseman scoring. What came as a bit of a shock, however, was how solid his one-on-one play way, especially coming from a defenseman who doesn’t even pretend to play physical. How did he make up for the constant size disadvantage? By using calculated and well-timed stick checks without toeing the line between playing within and outside the rule book. Fortunato’s arsenal of pump fakes, jukes, dekes and no-look passes to go along with a very good shot makes him a legitimate option for an organization bereft of playmakers on the blue line.

23 – C JAKOB FORSBACKA-KARLSSON (BOS 2nd/2015): A lot of the pre-draft talk centered on how solid a prospect he was but one who lacked a specific elite talent. Against Cornell, “JFK” was a non-stop force after a dull first 20 minutes, using his smarts and strong desire to continuously mount pressure on the Big Red defenders. He served as the Terriers’ primary weapon while on the penalty kill and nearly scored a tying shorthanded goal. He also centered BU’s top line, seeking linemates Ahti Oksasnen (seven shots) and Danny O’Regan, who controlled play for long periods over the game’s final 40 minutes and overtime. Although he did not register on the scoresheet, Forsbacka-Karlsson was one of the few players who seemed to have made a positive impact play to play, and shift to shift. It’s no surprise he’s a strong candidate to play for Team Sweden at the upcoming World Junior Championship.

18 – RW JORDAN GREENWAY (MIN 2nd/2015): Greenway’s night was the perfect example of why we needed to see him live and up close rather than go off of a televised game or box score. While surprising he hadn’t scored a goal though over a dozen NCAA games, the freshman power forward did exactly what we witnessed him do to opponents while playing last season for the NTDP – he used brute force, elite puck-protection skills and improved endurance to wear defenders down. It was therefore fitting for one of the contest’s most noticeable players to net the most important goal of the night off a hard working shift, tying the score 3-3 and sending it into overtime. Greenway finished the evening with a goal on four shots, and his play over the past month has improved significantly. He’s been moved up to the Terriers’ second line, centered by senior Matt Lane with freshman Ryan Cloonan on left wing.