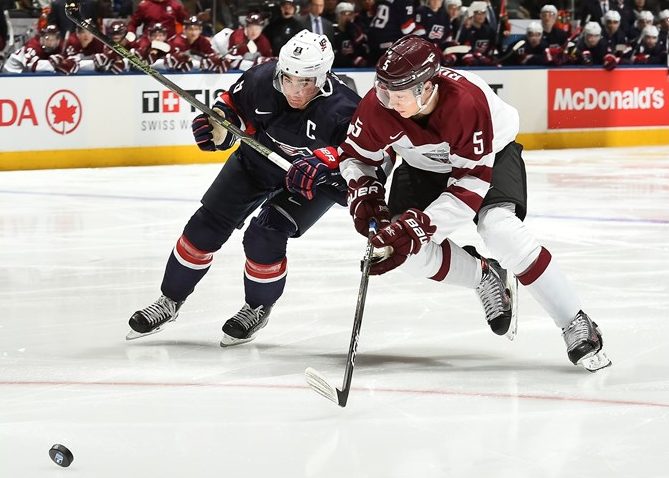 New York (The Draft Analyst) — The Latvians dropped a 6-1 decision to a heavily-favored U.S. squad, but the game was relatively close until the midway point of the third period. Latvia played a sound, disciplined game and for two periods kept the speedy Americans to the outside. In the end, however, the depth they faced was too much to overcome as the U.S. used five different goal scorers to record an expected opening-round victory. Nevertheless, several draft-eligible prospects performed admirably in the face of what initially was considered insurmountable odds.

LW Renars Krastenbergs (Oshawa, OHL | 12/16/98, 6’0/176): Krastenbergs is a wiry goal scorer with very good speed who slowed down in Oshawa after a hot start. He plays with bite and is very competitive but seems to have an aversion to anything involving puck battles and supporting below his own circles. Krastenbergs likes to wait for the puck to come to him rather than battle to get it himself and shows a general lack of understanding towards the defensive side of the game. He also was the last member of his on-ice unit to appear in the defensive zone when opponents countered. But he showcased his speed, hands and finishing abilities with a nifty breakaway goal in which he deked goalie Tyler Parsons before roofing a backhander over an outstretched glove. The kid has no desire to play defense, but he understands his role as a sniper and mustered two of the Latvians’ 12 shots on goal.

LHD Kristaps Zile (Dynamo Riga, KHL | 12/24/97, 6’1/174): Zile is a heavy hitter with a hard shot who captained Latvia’s entry at the WJC. We view him more as a top-four shutdown type than the power play quarterback his coach asked him to be against the Americans. Latvia in the second period had multiple opportunities to score with the man advantage during almost five minutes of power play time, including a lengthy 5-on-3 with the score tied at one. It was during these power plays where Zile’s limited creativity was exposed. On defense, he was positionally sound sans a goal against in the 2nd when he overcommitted high to allow a 3-on-2 to turn into a partial breakaway goal for Colin White.

LHD Kristians Rubins (Medicine Hat, WHL | 12/11/97, 6’4/216): Rubins had a strong game, using his size and reach to keep the Americans away from the front of the net. He was paired with San Jose Sharks draftee Carlis Cutske, and the duo did all the little things to prevent quality chances or gaps in coverage. He is a hard, accurate passer who keeps his head up and doesn’t set his teammates up for failure by forcing passes into areas of tight coverage. Rubins has excellent upper-body strength and is quick enough to pin forwards along the boards and retreat back to slot coverage.

C Deniss Smirnovs (Geneva U20, Swiss Jrs | 3/7/99, 5’9/146): Smirnovs is a swift two-way center who held his own against the bigger American forwards. Defensively responsible and smart with the puck, Smirnovs was relegated to depth duty and didn’t see much of the ice until the game got out of hand. He won four of his nine draws and took up proper positioning once the faceoffs were complete. He dropped well below the circles to cover gaps left by aggressive teammates, and on one occasion went deep into the goal mouth to successfully tie up 6’5 Jordan Greenway. He’s one of the top players on his Swiss junior league club and is known as more of a playmaker than a finisher.

C Valters Apfelbaums (Prizma Riga, Latvian U20 | 12/26/98, 6’0/159): High-intesity two-way center who logged big minutes and played in all situations. Apfelbaums is a hard worker and puck hound who takes the disc strong to the net. He displayed agility and quality edge work, using twirls and sharp cuts to spin his way from a checker, He’s quite quick despite having an upright skating style and covered ground in a hurry when he had to bust it for a backcheck. He went 5-for-15 on faceoffs and played on both the power play and on the penalty kill.