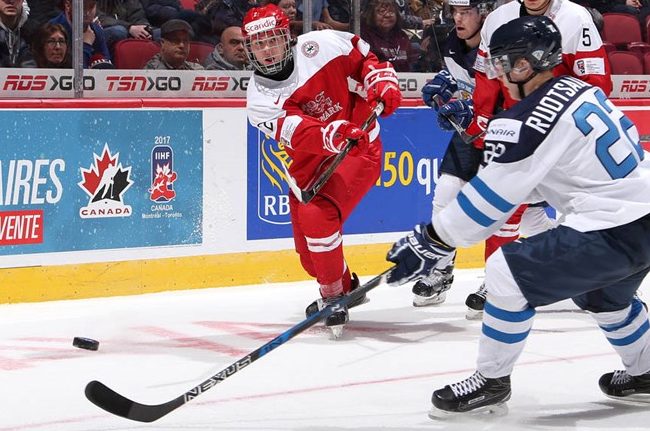 New York (The Draft Analyst) — Denmark pulled off the first upset of the 2017 world junior hockey championship Tuesday, edging defending-champion Finland 3-2. The Danes raced to a 2-0 lead to chase Finnish starter Veini Vehvilainen after 20 minutes and added Joachim Blichfeld’s decisive tally in the second for a 3-0 advantage. Goalie Kasper Krog stopped 34 shots for Denmark (1-1-0), which was pinned in its own end for the majority of the match. Finland (0-2-0) received goals in the third period from Urho Vaakanainen and Kasper Bjorkqvist, and Karolus Kaarlehto stopped six of seven shots in defeat.

RW Jonas Røndbjerg (Vaxjo J20, Superelit | 3/31/99, 6’0/176): Top Danish prospect who has a high hockey IQ and excellent instincts. Rondbjerg has few weaknesses, and he skates with a powerful stride, excellent balance and strong lateral maneuverability. His body and stick are always positioned properly within the defensive zone, and he keeps his head on a swivel to steal pucks for quick transitions up ice. Make no mistake — Ronbjerg is an offensive force with soft hands and excellent vision. He can handle the toughest of passes while operating at fast speeds, and can make sharp directional changes immediately after puck receipt. Ronbjerg is a versatile late-game option whether trailing or clinging to a lead.

RHD Oliver Larsen (Odense, Metal Ligaen |  12/25/98, 6’3/207): Mobile two-way defenseman capable of quarterbacking a power play and effectively breaking out of his own end. Larsen has excellent mobility for a defender his size and is poised with the puck, using his size, balance and reach to fend off the most aggressive of forecheckers. He uses the boards and the back of his own net to his advantage, reversing and changing direction to gain valuable seconds. Nielsen is most certainly a risk taker, however, and he needs to improve the timing of both his pinches and releases. He can be guilty of forcing passes into traffic without being pressed, and he looks more comfortable with a man in his face than he does with boat loads of time. He can be depended on to seal off or tie up his man as they move from a board battle to the slot.

LHD Oliver Nielsen (Herning, Metal Ligaen) | 10/6/98, 6’1/203) Nilelsen is a versatile, minute-munching shutdown defender with top-four potential. He consistently takes hits to move the puck to safety and opts for the quickest route to the puck rather than worry about the price he’s going to pay for having his back turned. Nielsen is a smart, poised puck distributor who stays within himself and doesn’t try to be flashy. He can be used as a top option on the penalty kill for shot blocking and quick reaction time to pucks within his immediate area, and he wins most of his 50/50 battles thanks to a long stick that he utilizes in a quick but legal manner.

C Christian Wejse (Blainville-Boisbriand, QMJHL | 12/4/98, 6’1/198) Two-way center with size and a solid understanding of the game who can kill penalties and play on the power play. Wejse protects the puck extremely well and will take a hit to protect the puck as puck support arrives. He uses the boards effectively rather than fling the puck into the middle of the ice, and while his offensive instincts are average, he can be counted on to win late-game faceoffs regardless of the situation. Wejse is an excellent penalty killer who is quick and relentless to the puck, and will sacrifice his body to block a shot.