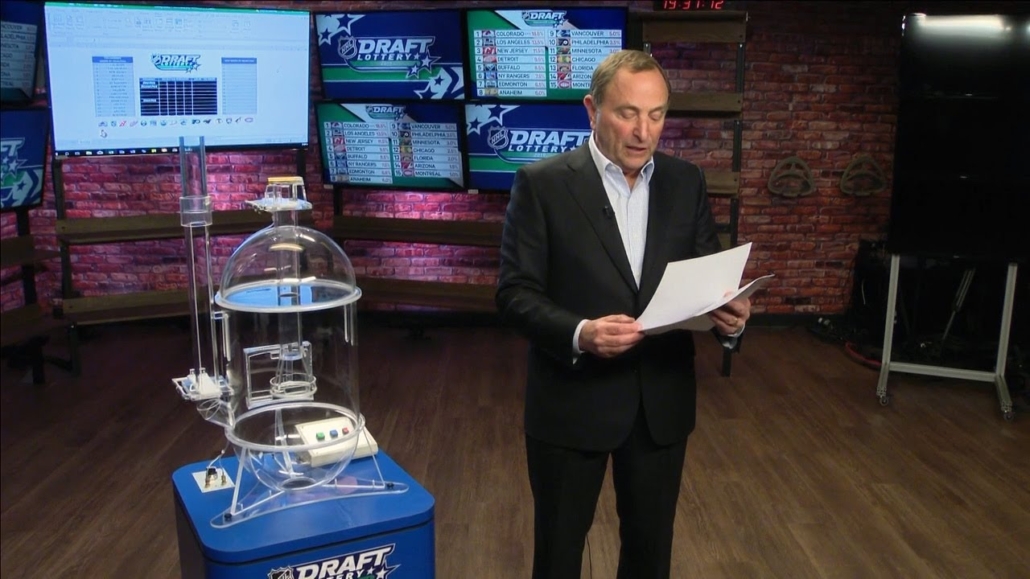 NASHVILLE (The Draft Analyst) — The NHL will hold its annual draft lottery on Wednesday, June 2, according to TSN’s Frank Seravalli. The report, which aired on Tuesday during TSN’s “Insider Trading” segment, also indicated that the league has not yet distributed the official draft odds to teams, nor have they made any formal announcement regarding when and where the lottery will be held.

The biggest takeaway from the report, however, is the status of Arizona’s 2021 first-round pick, which the league took away as punishment for the Coyotes’ running improper off-ice combines for Canadian Hockey League prospects during the tenure of former general manager John Chayka.

According to Seravalli, the Coyotes will in fact take part in the 2021 drawing (if they miss the playoffs) but are ineligible to receive either the No. 1 or No. 2 overall pick in the draft. If the four-number sequence drawn for either pick belongs to the Coyotes, then a redraw will be conducted until two other teams are identified. Therefore, there will not be a redistribution of lottery odds, the report claims.

The Coyotes also forfeited a 2020 second-round pick while Chayka, who abruptly left his post in the midst of the scandal, was suspended by the league for the 2020-21 season for “conduct detrimental to the league and game”.

Although the addition of a Seattle expansion team increased the number of 2021 lottery participants from 15 to 16, the forfeiture of the Arizona pick essentially keeps the number of first-round draft slots at 15 for the non-playoff teams and 16 for those who qualify.

As of today, the Coyotes are very much alive in the race for the West Division’s final playoff berth. The last day of the regular season currently sits at May 19, so it’s possible the June 2 draw will occur between Rounds 1 and 2 of the playoffs.

As for the lottery itself, the process has been scrutinized for several years, particularly for recent outcomes that punished bottom dwellers and rewarded high draft picks to mediocre teams with bloated payrolls who simply underachieved.

Last year, the New York Rangers won the first-overall pick in spite of finishing 40 points ahead of the last-place Detroit Red Wings, who drafted fourth.

In 2017, the Philadelphia Flyers finished with 88 points yet won the No. 2 pick in the lottery while Colorado — the league’s worst team with 48 points — were knocked down to No. 4.

The league eventually responded by making several changes to the format beginning with the reduction in the number of lottery draws from three to two. Therefore, the team with the worst overall record in the 2021 standings (currently the Buffalo Sabres) can finish no lower than third in this year’s lottery draw.

Next year’s lottery takes the changes one step further by reducing the number of teams involved in the lottery from 16 to 11, thereby preventing a team from jumping more than 10 spots in the lottery order. Non-playoff teams ranked 12th through 16th will not be eligible in the drawing.

Additionally, the same team cannot have more than two lottery wins (for the No. 1 or No. 2 picks) within a five-year period that begins with the 2022 draw. This prevents a team from unintentionally cornering the market on top draft picks, which is what the Edmonton Oilers did with three consecutive lottery wins between 2010 and 2012.