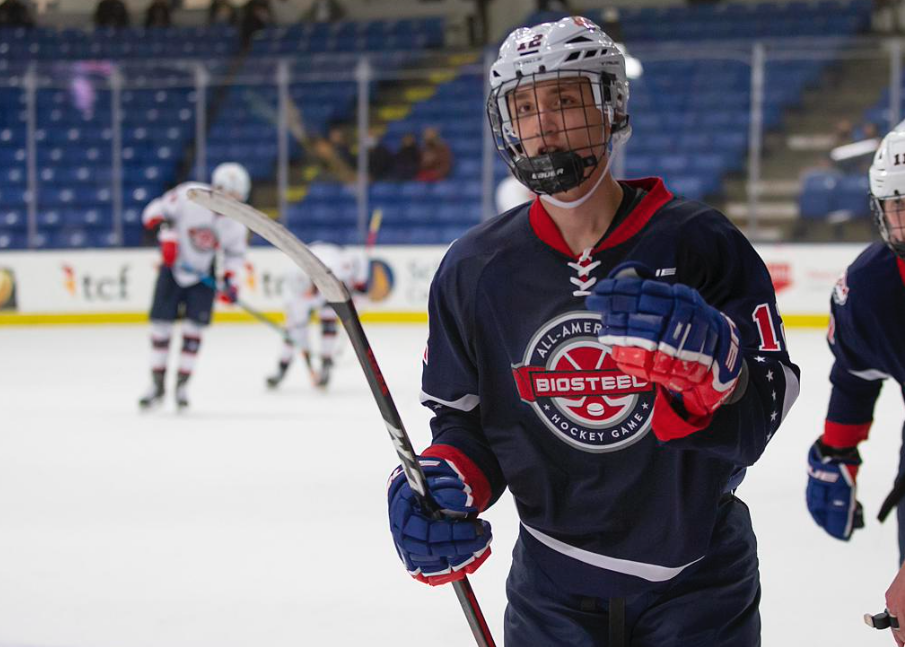 Red Savage, Center: One of my favorite players to watch for a variety of reasons, beginning with his penchant for momentum-changing plays no matter the situation. So, it came as no surprise that the son of former NHL goal scorer Brian Savage opened the scoring by burying a loose puck just 46 seconds into the match. Savage, who’s committed to Miami, easily is one of the best penalty killers available for the upcoming draft but his nonstop motor and smart positional play were also evident throughout the contest. He pushed his way into my first round before Wednesday, so  it will therefore require a disastrous showing at the U18 worlds to knock him out of it. Hard not to root for such a smart player who clearly understands the game.

Aidan Hreschuk, Left-handed Defenseman: As stated previously, Hreschuk is a top-pairing stud who delivered yet another outstanding performance; specifically in his own end by breaking up plays in the slot and quickly transitioning up ice with decisiveness. The native Californian didn’t register a point in this lopsided affair, but he was physical against bigger forwards and leaned several puck rushers well away from a direct route to the goal. From a reads-and-anticipation standpoint, Hreschuk played a near-perfect game against a dangerous collection of scorers.

Sasha Pastujov, Right Wing: It always gives me a chuckle when a prospect’s skating is marginalized without any sort of context or acknowledgment that the teenager can either improve in that area or render any shortcomings as insignificant because of plus-plus strengths in other areas. Pastujov isn’t explosive, but his shot power, and stickhandling, and nose for the net are helping him produce at an impressive clip (1.53 points per game). On Wednesday, the Notre Dame commit didn’t get many chances to unload his nasty shot, but he kept the puck on a string and buried two chances from in close. I’m always going to keep him ranked high because those hands and that shot plus his willingness to get inside positioning against bigger defenders will translate into point production at higher levels.

Chaz Lucius, Center: Lucius is another kid who gets knocked for his skating but keep in mind that he suffered a serious knee injury and missed a chunk of time. He and Pastujov have terrorized opposing defenses the last two seasons, and the trend continued on Wednesday with Lucius picking up two assists, including one after his breakaway snipe for the glove side was batted towards Pastujov for the rebound tally. Lucius’s lateral quickness and elusiveness is more impressive and noticeable than his straight-line speed or first step, and he is looking quicker and quicker each game. He’ll never be a roadrunner but like Pastujov, the shot-hands combination is tantalizing for a player of any age.

Andre Gasseau, Center: He’s not a big-time scorer and isn’t ranked among the better centers in this draft class, but Gasseau screams NHL center in so many ways. He has the perfect frame for a pivot (6-foot-4, 202 pounds), but he’s one of the better 200-foot centers available and has been critical in the success of his support line along with grinding winger Jack Devine and smaller playmaker Ryan St. Louis. Destined for Boston College, Gasseau moves very well for a player his size and makes his money in board battles and in the corners thanks to his shiftiness. He didn’t pick up an assist on Devine’s goal that made it 2-0 but he did not solid board work and pressured USHL defender Jack Peart into a ghastly turnover.

Roman Schmidt, Right-handed Defenseman: Central Scouting was questioned for giving this big-bodied defender an “A” grade in their initial Watch List, but watching Schmidt long enough reveals a smart, nimble yet physical shut-down type who opponents hate to play against. He’s usually paired with quicker puck rusher Sean Behrens, but Schmidt spent a fair amount of Wednesday’s match partnered with Hreschuk. Not only was he clean with his first passes and accurate with his shot attempts, but the Boston University recruit has impressive quickness in tight spaces and used his footwork to either walk the line or maintain his tight gap against quicker forwards. He picked up an assist via a no-hesitation wrister that created a rebound for Pastujov to bury.

Cole Sillinger, Center/Left Wing (Sioux Falls): It’s safe to say Sillinger was one of Wednesday’s high-value targets for NHL scouts, as he’s earmarked by many to be drafted in the top 10. Sillinger, who joined the USHL from the WHL’s Medicine Hat Tigers, has played wing before but against the 18’s was centering skilled puck handlers Josh Doan and Matthew Knies. As expected, Sillinger played a 200-foot game with power and physicality, plus he orchestrated a couple of quality cycles. But he also showed outstanding patience and pass accuracy while under pressure; specifically in the neutral zone with bodies draped over him. He’s another kid whose skating gets overanalyzed, but on one occasion he dropped the shoulder and changed gears for a straight-line charge to the net on his backhand. Sillinger’s balance is elite anyway, so keep that in mind when people try to ding him for a lack of explosiveness.

Cam Berg, Center (OA-Muskegon): All in all, Berg’s line with wingers Jack Harvey and Connor Kurth was the USHL’s most effective and consistent. They came close to scoring several times, with Berg using his impressive speed-power combination to force turnovers and enter the opposing zone cleanly. It may seem easy for kids with his size (6’0, 192 pounds) to create matchup problems in a junior league, but Berg’s effort on or off the puck is exemplary, and he is an excellent forechecker. His performance on Wednesday was not driven by the spotlight — he plays with maximum effort and energy every game. Berg is committed to Omaha-Nebraska.

Matthew Knies, Left Wing (Tri-City): Knies is a kid who I had penciled in for the first round in my preseason poll but have been dropping him ever since because of consistency issues. Nonetheless, Knies is an excellent prospect from a puck-skills and size standpoint (6-foot-3, 205 pounds), and I liked the way he was able to handle tough passes in traffic while moving at full speed. There were several noteworthy moments with Sillinger and Doan either off the rush or during the cycle, but neither he nor Doan recorded a point or a shot on goal. Knies is Minnesota bound once his USHL career is complete and he should instantly provide the Gophers with playmaking and stickhandling prowess from the flank.

Connor Kurth, Right Wing (Dubuque): Kurth is a throwback of the highest degree — he’s built like a brick house and can play with controlled violence but also reveal a nice touch and heady playmaking around the net. His skating for a winger his size also is deceptive because Kurth’s stride is a little wide and choppy but he continues to beat opponents to the desired spot and can take a defender to the inside. I’ve seen games where this kid was flat-out unstoppable, and on Wednesday he was one of the few USHL’ers who appeared to have chemistry with someone who wasn’t already a teammate. Kurth is committed to Minnesota.

Tristan Broz, Left Wing (Fargo): It seems like every week I get a call or text from someone telling me I need to get Broz into my first round. That likely won’t happen, but the skilled winger has carved out an excellent draft season that includes better defensive-zone play and  a noticeable effort to play more physical. Then again, when you can blister the puck like Broz, the aforementioned traits are gravy and shouldn’t detract from a draft resume that already was impressive. Broz also is a Minnesota commit who on Wednesday was given the plum job of flanking Chicago’s skilled duo of center Matthew Coronato and winger Mackie Samoskevich. As it turns out, Broz barely touched the puck because his aforementioned linemates seemed to alternate shifts between who was going to dominate the puck from start to finish. Hard to believe an offensive dynamo like Broz didn’t even register a shot despite playing with two of the USHL’s premier playmakers.

Matthew Coronato, Center (Chicago Steel): It was an odd game for the USHL’s leading goal scorer and shooter, as the Long Island native mixed in several instances of overhandling and unforced errors with outstanding vision and stickhandling under pressure. There aren’t many teenagers who can create chances for themselves or their linemates as often as Coronato, but on Wednesday the number of shots generated by way of his decisions seemed split between friend and foe. Personally, I’m not putting much stock into it, simply because Coronato is an elite playmaker with a sharp hockey mind who an into an opponent on top of their game. He was the primary puck distributor on the USHL’s top power-play unit and drew an assist on Ryan Ufko’s goal with the man advantage.

Mackie Samoskevich, Center/Wing (Chicago Steel): Samoskevich on Wednesday yet again showed why he’s one of the more excitable forwards available in the upcoming draft. Not only was the Connecticut native exploding up ice at will, but he was taking the puck inside and throwing the NTDP’s normally-sound neutral and defensive-zone coverages into disarray. Samoskevich was the dominant puck carrier on multiple shifts and used his speed and vision to enter the zone clean before spotting open cutters or trailers. Committed to Michigan, Samoskevich also assisted on the USHL’s lone goal of the evening.

Ryan Ufko, Right-handed Defenseman (Chicago Steel): Another Long Islander who is making a legitimate case to be drafted in the first round, Ufko was the most reliable USHL defender on the puck and used his impressive footwork and sound decision making to enter the zone cleanly and extend possessions. Even in the few times he turned it over, Ufko’s intentions are sound, especially when faced with intense pressure from an aggressive NTDP forecheck. In addition to scoring a power-play goal, the future U.Mass-Amherst blueliner played with a lot of swagger and confidence in his stickhandling ability. I didn’t see him deliver any major wallops but Ufko usually plays a spirited game that involves hard open-ice hits.

Shai Buium, Left-handed Defenseman (Sioux City): Buium has a lot of people in his corner and for good reason — the kid is a 6-foot-3 defenseman who can play physical but also look to attack any chance he gets. Buium was hyper-aggressive on Wednesday, sometimes to a fault, as he tended to either fly the zone without possession changing hands or chase a forward as far from his slot as possible. Yet even with these lapses in judgement, I’ll still defer to his league play with Sioux City that is incredibly poised and calculated. Buium is by no means reckless; he just plays like he hates to turn down the chance to create a numbers advantage. In all honesty, his gambles seem more like a timing issue than anything else, and that extra second that will help him down the road is something he’ll learn to value more as he gets older.