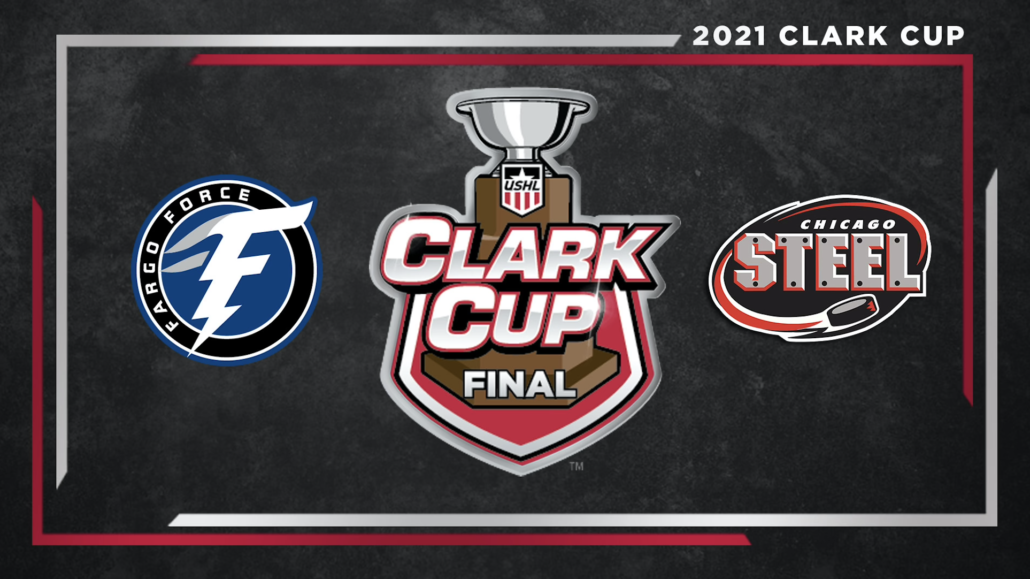 The Force is an older team by USHL standards, especially when compared with prospect-lodaed Chicago, which won the USHL’s regular-season crown and had a +80 goal differential. Fargo also had a good season and were one of the league’s top defenses, but the Force nearly was eliminated in Round 1 after dropping the first game of their best-of-three series against Tri-City. After trailing 4-3 late in the third period of Game 2, Buffalo Sabres’ prospect Aaron Huglen extended the life of the Force with a redirection that forced overtime and a slick centering feed on the winner from Cody Monds. Fargo would take the deciding Game 3 and later handle Sioux City in two games the following round to set up a date with the powerhouse Steel, who prior to Game 1 had not been shutout this season. In Friday’s win, the Force raced to a 2-0 lead in the first period on goals from Chicago native Kyle Smolen and defenseman Jack Peart, but it had already established a suffocating neutral-zone defense that frustrated the Steel from start to finish.

Although I wouldn’t call Broz a first-round candidate in a deeper draft with defined tiers for premier talent, he’s easily one of the top USHL prospects for 2021 and he checks several blocks that make him a well-rounded player beyond scoring. He’s added some muscle since last season and it appears to have given him more confidence to not only throw his weight around but also greet opponents with some nasty woodwork. The series with Tri-City was heated and nasty, yet never once did I think Broz as a top-liner was intimidated by the visible targeting. The Steel as an opponent aren’t as collectively physical, so Broz was able to concentrate on both sides of the puck while sticking to Fargo’s read-and-react game plan. With the puck, the future Minnesota Golden Gopher displayed acute vision and was also whipping pucks around with authority and without hesitation. It’s also not an exaggeration to consider him one of the draft’s most dangerous 1-on-1 players for both his skating (balance, speed, and agility) and elite stickhandling. There was one moment late in the game stood out, and it was when Broz put his head down and hustled on backcheck to help negate a short-handed counterattack. Not only was the effort commendable, but he got added points for doing it while up 3-0 in the late stages of a game they clearly were in control of.

Morrow didn’t suit up for the Force until the Sioux City series, so he missed out on all the shenanigans and tense, late-game battles in Round 1. A right shot, Morrow was used on the third pairing while Jack Peart and Ryan Siedem handled the lion’s share of special teams and key situations. It was within this role where Morrow played a heady two-way game with multiple examples of his elite skating ability. The name of the game for the Force, however, is defense, and I thought Morrow quickly buckled down after looking somewhat disoriented by the sheer weight of Chicago’s pressure, speed, and skill. He coughed up the puck once or twice, but that ended up being par for the course for everyone on either side in this tight-checking affair. There were two shifts, however, that highlighted Morrow’s strengths as a top draft prospect. The first was a clean pivot into a zone exit that allowed him to not only enter the offensive end, but also float a perfect feed above harm’s way that caught a forward in stride for a quality scoring chance. The other instance showcased his smarts in the defensive zone, with Morrow shoulder-checking for Matt Coronato’s omnipresence before marking him to break up one attempt, then shoving him off balance while looking for a rebound. I thought Morrow had a strong game regardless of the high stakes or the quality of his opponent, so I wouldn’t be surprised if head coach Pierre-Paul Lamoureux felt the same and expanded Morrow’s role for Game 2.

#USHL: Good sequence from RHD Scott Morrow in Fargo’s 3-0 win over Chicago. After being a little too loose at his line, Morrow shows off the wheels, the touch, a timely poke, and then kept cool when Jack Bar tried to bait him. Was on bottom pairing but Force is deep on back end. pic.twitter.com/D6JYuo5MyS

Peart is a mature and likable prospect who anchors Fargo’s top pairing alongside former NTDP’er Ryan Siedem. The tandem was instrumental both on and off the puck in helping the Force win the first two rounds, and that continued into Game 1 of the Clark Cup Final. To nobody’s surprise, Peart matched up against both of Chicago’s two top lines and still found a way to create and finish his own breakout with a 2-0 tally in the first period. Things thereafter got a little hairy for him in the puck management department, as I counted at least five blind passes into the middle of the ice that fortunately never ended up in the back of the net. Still, Peart is very poised and composed, and I think the risky passes had more to do with overconfidence than contact avoidance or haste. He’s a powerful skater with above-average speed and excellent balance, but I also liked his hands and how he was handling or delivering d-to-d passes. Peart is a dependable leader on the ice and is exactly the asset you want to match up against the best the opposition can offer. With a thick frame and physical play in the corners, Peart should continue to be tasked with making life difficult for Chicago’s army of finesse forwards. He’s committed to St. Cloud State

There’s a growling hunger and unquenched thirst coming from the outskirts of Chicago, and it has nothing to do with deep dish pizza or Old Style Light. After being robbed of the chance at USHL immortality a season ago, the Chicago Steel once again laid waste to the competition while icing one of the deepest collections of draft-eligible talent in league history. No, they’re not the U.S. National Team Development Program that has produced dozens of recent first-round NHL draft picks. But in terms of making an opponent suffer for a full 60 minutes, there aren’t many junior programs in either North America or Europe who compare to the Steel, which in the first two rounds swept both Dubuque and Muskegon en route to a Clark Cup Final they were favored to win the season prior before it was cancelled. That is why Friday’s 3-0 shutout to Fargo in Game 1 was more shocking than it was disappointing, although the Force deserves credit for limiting Chicago’s vaunted attack to only 20 shots on goal. The Steel controlled the puck frequently but were off by a hair or two during execution which not only kept Fargo in the game, but also allowed them to exploit mistakes by countering with speed. Chicago is far from dead in this best-of-five series, but the Steel probably knows its chance for redemption will run out quickly if the effort in Game 2 is not infinitely cleaner.

Coronato’s combination of elite puck skills and a visible desire to be the best is something all coaches should want in their players. Although the Steel were blanked for the first time this season, Coronato was yet again their most dangerous forward and it would be folly to think he won’t adjust his timing to prevent the multiple shanked shots and wide-open misses he had on Friday night. Much like Broz, Coronato is an expert stickhandler, although he’s a bigger risk taker and can get caught up in the moment while trying to do everything himself. It’s hard to blame him, however, as Coronato was one of the most prolific scorers in USHL history and the slick moves he makes in the neutral zone usually work in trapping forwards behind the puck’s direction of travel. He centered speedster Mackie Samoskevich and hard-nosed winger Erik Middendorf, and the trio nearly connected on several chances before being split up later in the game. Personally, I like Coronato’s demand for the puck because he hates wasting time and loves keeping pressure on the opponent. If that’s what you call puck hogging, then sign me up.

Samoskevich, much like the majority of his teammates, had a tough time navigating through the neutral zone and was therefore mostly ineffective at 5-on-5. He flanked Matt Coronato to start, and along with Erik Middendorf the trio had a few looks close to the goal earlier in the match. One thing I noticed was that Chicago did not use Samoskevich as one of the four forwards on the first power-play unit, and he that he also was part of some line juggling as the outcome became obvious. But Samoskevich is an elite skater who attacks the middle of the ice with confidence and control, and several of his entries forced Fargo’s defenders to back in further off the line than usual. One of the better chances the Steel had in the early stages was generated by Samoskevich, who while facing the right half-wall delivered a perfect backhand feed to Coronato for a one-timer that was shanked.

Ufko is a tough two-way defender from Long Island who serves as Chicago’s on-ice general from the blue line. It’s not easy to distribute pucks equally when there are multiple premier forwards on almost every line, but Ufko learned quickly to maximize their strengths while showing off his own agility, quickness, and playmaking in the process. Fargo deserves credit for keeping him in check in Game 1 but there were a couple of shifts when Ufko was dancing around in multiple directions inside the offensive zone. He wasn’t as demonstrably physical as we’ve seen him before, so look for him in Game 2 to attempt some momentum-swinging plays such as an open-ice wallop or an end-to-end rush.

An aggressive two-way blueliner, Bar was his usual rambunctious self in Game 1. Whether it was activating off draws or joining the rush, Bar was always involved in one play or another and did so in all three zones. Where he stood out the most, however, was in the physicality department where he literally tried to hit anything that moved. He’s a mean, angry player, and sometimes that can get him into trouble from a positioning standpoint. Although we’re in the final stages of this 2020-21 season, I think the rest of the USHL is privy to his style and hard-hitting antics, and his opponents seem conditioned to either avoid the hit, allow him to take himself out of position, or simply ignore him after the whistle. His skating definitely is a strength, however, as Bar yet again showed elusiveness and agility while delaying under pressure before changing speeds away from the neutral zone.