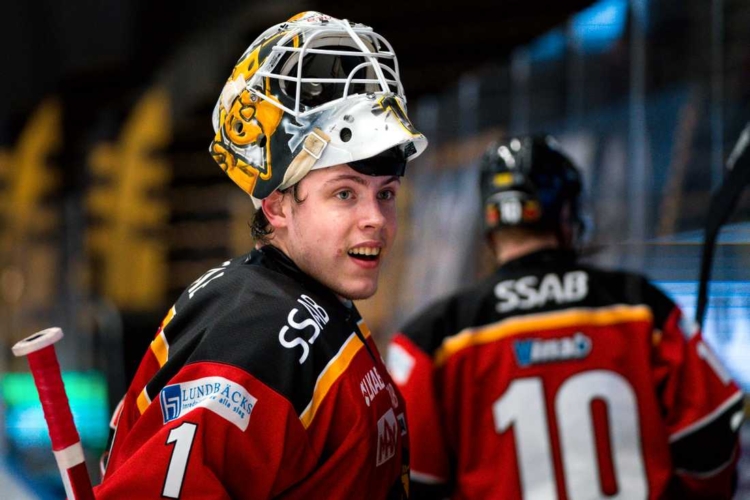 Wallstedt is Sweden’s most decorated goalie prospect in over a decade and has already drawn comparisons to his boyhood idol Henrik Lundqvist. Born into a family of netminders, Wallstedt has always played at least two or three levels above his age group. In fact, Wallstedt at 14 not only became the youngest player to ever debut in the J20 Superelit, but he also led the difficult Top-10 portion of the schedule with a .927 save percentage over nine starts.

His upward trajectory continued thereafter, as Wallstedt backstopped Sweden in at least one of every major international prospect tournament in the under-17, under-18, and under-20 brackets, posting a combined .913 save percentage in 24 appearances. He spent the entire 2020-21 campaign with a competitive Lulea squad in the adult-age SHL, where he posted a solid 12-6-4 mark and periodically took hold of No. 1 duties while finishing 13th among 35 goalies with a .908 save percentage.

The regular season was far from rosy for Lulea, which made the playoffs but went through periods of inconsistency with both scoring and goaltending while using three different starters in net. Wallstedt began the season as backup to David Rautio but replaced him after a strong surge that began immediately after he returned from the world junior tournament. Wallstedt eventually lost his No. 1 job when Joel Lassinantti — Lulea’s No. 1 the previous season — returned to the club in January from HK Sochi in Russia’s KHL. Seventeen of Wallstedt’s 22 starts came prior to Lassinantti’s arrival but only five came in Lulea’s final 17 games.

Nonetheless, Wallstedt still had the benefit of playing behind one of the SHL’s stingiest defenses and still received an adequate regulation goal support of 3.10 per game. Lulea limited opponents to under 30 shots in 45 of their 52 games, including 19 of Wallstedt’s 22 appearances (22 shots or less in 11 of 22 starts).

To nobody’s surprise, Wallstedt served as Lassinantti’s backup during most of No. 5-seeded Lulea’s first-round series with No. 4 Skelleftea but he was hastily pegged as the Game 6 starter in what could have been the series clincher for Lulea. Although he took the loss and Lulea was eliminated in Game 7 with Lassinantti back in net, Wallstedt’s first taste of pressure-packed SHL hockey was a major milestone in his development.

Wallstedt is like most notable Swedish goalies in that he uses a standard butterfly style and classifies as an “inside-out” — meaning he sets up from the goal line and moves towards the top of the crease when he deems it necessary. One of several significant aspects of Wallstedt’s “style” as a teenager is that he is incredibly consistent with his deep-in-the-crease preferences and doesn’t seem to switch back and forth from attack mode to staying deep. He’s stays narrow and upright as the puck moves east to west from up high, then he quickly drops (and stays) into his Reverse Vertical-Horizontal (RVH) once the puck drops below the faceoff dots. He’s more aggressive on breakaways but you’ll rarely see Wallstedt challenge a shooter beyond the top of the blue paint.

Wallstedt uses the RVH exclusively with his skate blade tucked inside the post and stick blade perfectly horizontal to the ice. His post seal borders on textbook and Wallstedt even has the presence of mind to tilt his mask in order to cover the near-side top corner. Only once this season was he beaten on a sharp-angle shot from below the bottom of the circle and that particular example was simply a footwork foul-up rather than losing his bearing or cheating towards the weak side. You will see Wallstedt remain in his RVH as he shuffles from post to post while the puck gets worked around from behind the net.

Although one must evaluate Wallstedt’s season within the context of a teenage goalie playing against near-NHL-caliber shooters in Sweden’s top league, the reality is that neither Wallstedt’s glove nor his blocker (at this point in his development) are areas of significant strength. He relies mostly on squaring to the puck and keeping his angles aligned from pass reception through shot release. But there is no doubt that seasoned SHL snipers were targeting Wallstedt’s upper half throughout the entire season — specifically high-blocker — and a late-season slump that probably cost him the No. 1 job could be traced back to a rough patch where he was regularly being beaten middle or high blocker (or glove) with wrist shots.

Still, there’s no reason to overanalyze Wallstedt’s blocker-hand or glove-hand positioning since the biggest factor for the spike in goals allowed is tied to his playing deep in the crease — the Achilles’ heel for the majority of elite inside-out goalies, to include Wallstedt’s idol Lundqvist. As long as Wallstedt studies NHL shooter tendencies throughout his career, he should be able to make it more difficult for them to exploit any openings in the upper half.

Wallstedt’s hockey IQ for a teenage goalie is fairly high but it’s hard to determine if his high-danger saves are a byproduct of anticipation and acknowledging weak side or slot threats, or simply via his size and staying down to blanket the lower half. He was mostly conservative in the way he treated low-slot and backdoor dangers, but playing for an excellent defensive team like Lulea usually kept the puck out of critical areas for nearly the entire game. Although Wallstedt’s quickness allows him to react and set during passes from across the seam or behind the goal line, he’s usually a split second slower at reading the intended destination for the setup. He’s also been victimized by guessing incorrectly on puck travel from behind the net and seemed to be saved by the post on at least a half dozen shots from the high slot or point without much traffic in front.

Wallstedt’s rebound control is adequate for his age and you have to assume he will continue to make refinements to minimize the number of medium-danger and sharp-angle chances he puts back into the low slot. He did show a tendency to lose pucks after stopping them, but Wallstedt’s cat-like quickness for his size and strong net awareness allow him recover in good order to make any follow-on attempt from in close look as stoppable as the initial chance from a greater distance.

Wallstedt’s quick pads and post-to-post coverage are as close to elite as one can find in a teenage or amateur netminder. He dominates the lower half and is just as explosive recovering from the butterfly as he is dropping down into it. Wallstedt does not stay down in the butterfly for long and there were multiple examples this past season where he dealt with second- and third-chance attempts from in close without ever keeping either pad on the ice for more than a second. He also shows a rapid five-hole seal as he drops down and recovers. Unless it was on a breakaway or deflection, you rarely saw Wallstedt get beaten five-hole.

Wallstedt has become more active on dump-ins than in previous years but he’s still a novice when it comes to timing rims and handoffs to his defensemen. His wrists are adequatley strong to move the puck over distances within his blue line but those instances are the exception and not the rule. Wallstedt isn’t much of a poke checker and will allow cross-crease passes to sneak through to the weak side in order to maintain his tight post seal. Although he doesn’t have to adopt a more active stick during close-in chances, Wallstedt could stand to improve his blade positioning and every so often attempt a poke check to keep opposing stickhandlers honest as they inch closer to his cage.

Wallstedt stays upright during the majority of an opposing possession but will drop into and stay in his RVH the second the puck goes from high to low. He’s rarely on his belly or “swimming” in the crease and his post-to-post movements while tracking are economical. Therefore, Wallstedt doesn’t burn energy unnecessarily, but then again his workload was ridiculously low which makes it hard to gauge how quick he’d be in the third period or overtime of a game where he’s faced 15-20 shot attempts a period instead of 18-25 shots the entire game.