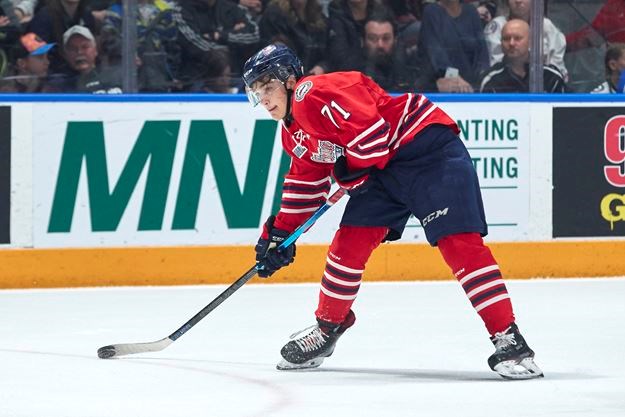 Some may think otherwise, but it’s probably a burden to live up to expectations when you play for a storied junior franchise that just happens to be owned by your father. That was the situation for Tullio in Oshawa, whose father Rocco purchased the Generals outright in 2008 and eventually drafted Ty with the 11th pick in the 2018 OHL Priority Selection. Naturally, accusations of nepotism surrounding the selection, but Ty had already established his reputation as a hard-working scorer with skill and was going to be a high pick regardless.

The decision turned out to be a smart one, however, as Tullio was not only one of the top scorers from that impressive 2018 class, but he also worked himself up to Oshawa’s top line with Nashville prospect and 100-point scorer Phil Tomasino. Although Tullio from the beginning of the season bounced around from line to line and wing to wing, he made a profound impact anywhere he was used. His hard-nosed style and nonstop motor proved to be infectious, but he also displayed impressive puck skills and the ability to dominate shifts on his own.

Tulio is a hunched skater and stickhandler whose hands are both soft and quick. He expertly controls the puck in full flight but also deadens tough cross-ice passes off the rush on either his forehand or backhand. He had the benefit of lining up next to superior set-up men such as Tomasino and Allan McShane, and neither had to worry about Tullio mishandling one of their dishes. He also has excellent hand-eye coordination and cleanly goes skate to stick in the event of a hard pass at his feet. His straight-line speed is above average, and he is in open ice frequently because of a quick first step, but his slight frame and average balance make him an easy target for opponents trying to knock him off the puck.

Tullio can be classified as a dual-threat forward with very good vision and decision making who can play center or wing. He can be used for set plays with his as the primary shooter or set-up man. He owns an excellent shot-release combination and scored frequently using the one-timer from the left circle. Tullio knows how to finish beyond using his shot, specifically near the goal within net-front traffic. He’s such an accurate passer on his backhand that it makes sense to see him roofing pucks under the bar from a tough angle with a defender hounding him.

One thing that hasn’t won Tullio many friends among OHL competitors is his abrasiveness. He’s not very big but plays as if nothing can slow him down. He usually displays a good compete level, however, and will play the body while getting involved on the forecheck and hustle back full throttle to support his defensemen. Defensively, Tullio picks off a lot of errant passes in the neutral zone which is a credit to his quickness and anticipation; both which are on display during his time on the penalty kill, which is where he’ll also sacrifice his body to block shots.