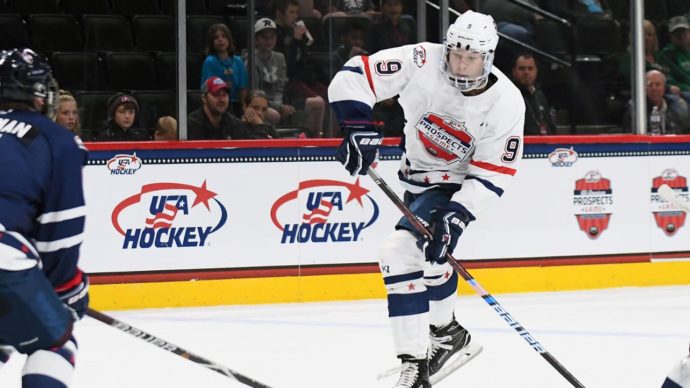 It’s not often you see a teenage winger literally play mistake-free hockey game after game, but Boldy finds a way to solving his own team’s problems while simultaneously presenting the opposition with a bunch of their own. He’s got pro-ready size, off-the-charts hockey sense and can score from just about anywhere. Boldy has buttery-soft hands and acts as a set-up man for all four of his mates when he himself is not flanking a playmaker, so this kind of versatility is exactly what you want in a future pro. He warrants a lot of attention from all five on-ice opponents for several reasons, namely for the violent nature of his directional changes while maintaining full control of the puck. It’s rare to see such a powerful skater look as graceful as Boldy does, and there are times where you have to remind yourself that the player dominating the puck is still a teenager and not a mid-20’s NHL forward.

He displayed a clear understanding of who his high-profile teammates were, and he likes to share the puck with them. There is a selfless way about Boldy’s game, but he won’t hesitate to rock defenders to sleep with nifty moves and a quick step or fake that gets him in prime shooting areas. Once he’s there, Boldy can quickly whip a heavy wrist shot labeled for the corner, even if it’s off his back foot or overextended. He’s also a deadly power-play threat from either manning the half wall or establishing position in the slot to screen or tip passes home. He can be used on the penalty kill as well, but he doesn’t need to be a man down to lend support below the circles to his defensemen.

#USHL: LW Matthew Boldy (Ranked No. 25) with a nice feed to RW Cole Caufield (Ranked No. 53), who buries it upstairs on the PP. C Jack Hughes (Ranked No. 1) also picked up an assist.

Sioux Falls and the NTDP are tied 1-1 in the 1st. pic.twitter.com/APvQtQUWQm