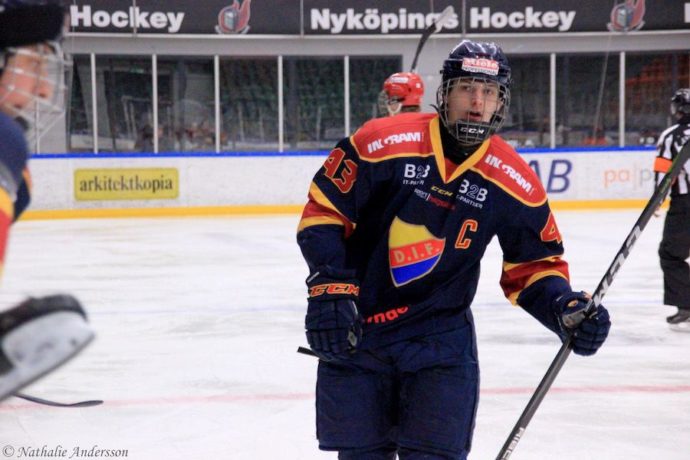 Another elusive yet intelligent defender from Sweden whose impressive skill set often gets overlooked due to the noteworthy 2001-born depth both the Swedes and Djugardens boast on their respective back end. Paired mostly with Albert Johansson during international events, Hedstrom is incredibly confident on-ice leader with or without the puck and distinguishes himself in all three zones. Hedstrom is a very good skater with swift feet and a quick first step. Although his defense is a significant part of his game, Hedstrom is an offensively-inclined puck rusher who is comfortable handling the puck. He is capable of executing an successful breakout in a variety of ways, with crisp, accurate first passes being his preferred method to trap forecheckers. Still, Hedstrom doesn’t need ideal conditions to attack up ice with confidence, and his aforementioned stickhandling when combined with his lateral quickness and rapid directional changes leads to successful individual zone exits and entires. He is very poised under pressure and beats back forecheckers with spin moves and cut backs, and he’ll even hang onto the puck specifically to draw a double team before exploiting the gap with a crisp forehand or backhand pass. Inside the offensive zone, Hedstrom uses a series of pump and head fakes as he walks the line for a clearer shot.

Hedstrom plays physical and never turns down the chance to give an authoritative shove to an opponent. His compete level and stubbornness make life difficult for opposing puck possessors. Hedstrom doesn’t seem to tire when using his stick actively, especially on the penalty kill. He also fights hard for low-slot positioning and uses his stick to punish bigger forwards attempting to establish a net-front presence. In open ice, Hedstrom affords room at the line but closes in an instant, often with a solid bodycheck. His defense of odd-man rushes is excellent, on par with the likes of notable draft-eligible teammates Victor Soderstrom and Tobias Bjornfot. His aggressiveness and desire to jumpstart the rush influences his slot coverage to the point where he will wander from his duties as far as the points.