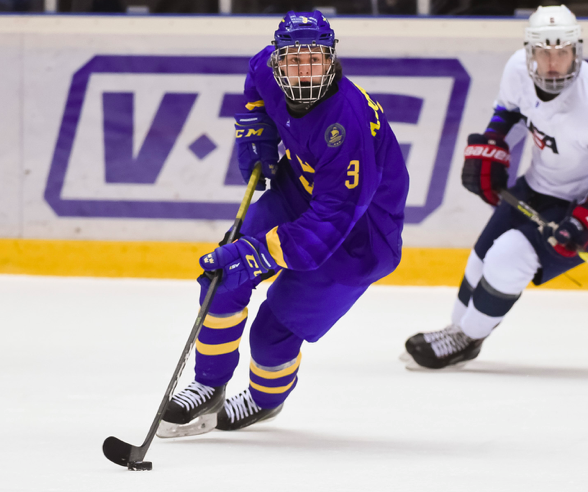 A speedy puck mover with NHL bloodlines who was Frolunda J20’s top-pairing defender and primary power-play quarterback, Johansson is one of the more aggressive rearguards available in the draft. The son of former Calgary Flames defenseman Roger Johansson, Albert led his club in assists (24) and was the top-scoring rearguard with 29 points, which was the third most among Superelit defensemen. He performed in a support role for Sweden at both the under-18 Ivan Hlinka and U18 world championship, paired mostly with a similar puck mover in Ludvig Hedstrom. There is a lot of swagger to his game, specifically when he’s carrying the puck with speed through the neutral zone. Johansson is consistent in penetrating or bypassing blocked skating lanes, and his decision making after zone entries varies from safe to audacious. In fact, Johansson spends a significant amount of time below the circles and can look like a finesse forward when he plays catch or operates in the cycle. His athleticism, agility and footspeed make him tough to contain, even near the wall or in the corner, and he can wire a hard wrister in one motion off a loose puck or bank pass. Johansson’s slap shot is average, but he has soft hands to corral tough passes and get pucks on net before the shooting lane gets clogged.

Defensively, Johansson is good for multiple timely plays in a period, let alone an entire game. He will explode towards a lazy cross-ice or stretch pass for an instant odd-man rush, but he also knows when to hold the line and deliver a hit with authority. His retreat and closing speeds are excellent, which can dupe a puck carrier into thinking there more room to operate. Although he isn’t a punishing hitter, Johansson has a strong upper body that helps him one-arm shove players off the puck or clear the front of the net. He releases from the slot quite often, but he seems to communicate with his partner and rarely ventures into an area where he’s not needed.