When it comes to the top pick, choosing a defenseman over a forward can have everlasting consequences
Steve Kournianos  |  07/18/2017 |  New York  |  [hupso] 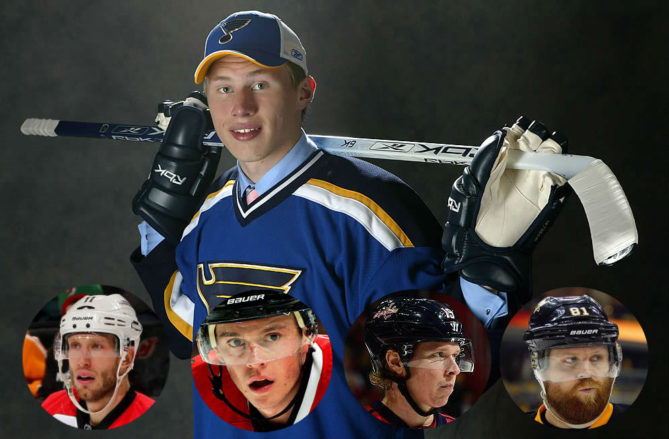 New York (The Draft Analyst) — The march of folly has to begin somewhere, and when it comes to the very top of an NHL Draft, a poor decision regarding whom to choose first can have severe strategic implications. It’s usually around this time of year — the Dog Days of Summer — when talent evaluators of all kinds determine which teenager has the early-season grip on being called the favorite. For right now, it seems as if Swedish defenseman Rasmus Dahlin, a gifted puck mover with dizzying skills has as much a stranglehold on that distinction as anyone else. And why? For starters, he is one of the youngest defenders to earn a regular shift in the elite Swedish Hockey League. In addition, the youngster is building a popular YouTube resume featuring spin-o-ramas, no-look passes and the occasional open-ice smash. Nevertheless, scouts have been down this road before — star kids with promise who dominate their peers two seasons prior to the draft, thus earning the distinction of being the “favorite” to become the first overall pick.

When it comes to forwards and the first overall pick, scouts are usually bang-on — Connor McDavid (2015), John Tavares (2009), Sidney Crosby (2005), Alex Ovechkin (2004) are just some of many “generational” talents labeled as such years before being selected No. 1 in their respective draft year. When it comes to defensemen, however, things get a bit tricky. First, teams picking first overall seem to avoid taking a defensemen unless they feel like they absolutely have to. One reason could be that since 1963, a defenseman was taken first overall only 12 times out of 55 drafts. And of those 12, only one — Islanders Hall-of-Famer Denis Potvin — finished higher than 6th in a given season’s Norris Trophy voting.  Below is a breakdown of the blueliners chosen first overall since the draft began in 1963.

Potvin notwithstanding, this is not a pretty list. And things get a tad dicey when you compare it to the first forwards taken following a defenseman who went first overall.

On the flip side, take a look at every forward taken first overall between 1987 and 2015. Of the 21 forwards chosen No. 1 since 1987, only five failed to achieve either a single-season Top-10 finish in scoring or place in the Top-10 in Hart Trophy voting. And that doesn’t include Auston Matthews, who as a rookie in 2016-17 was 11th in Hart voting and second in goal scoring. 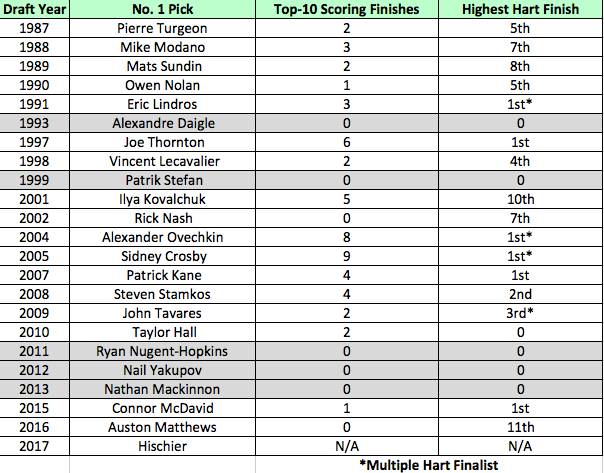 The run of defensemen going first overall between 1992 and 1996 can be attributed to one thing, and one thing only — those were terrible drafts, and the only year in that group that was considered strong (1993) saw a forward in Alexandre Daigle get picked first. It appears since as though NHL GMs learned their lesson, as only two defensemen — Erik Johnson in 2006 and Aaron Eklbad in 2014 — had the privilege of being selected first among hundreds of draft-eligible peers. While Ekblad is just scratching the surface on what could be a star career, it appears as if the oft-injured Johnson, who is nearing 30 years old, will never live up to hype that made former Blues GM Larry Pleau take him over future HOFers like Jonathan Toews and Nicklas Backstrom, or Cup winners Jordan Staal and Phil Kessel.

Nonetheless, the chatter around draft circles is that it is Dahlin — not Russian super-sniper Andrei Svechnikov — who come June is all but guaranteed to go first overall, possibly joining a list of defenders who without Potvin collectively attained marginal accomplishments unworthy of first overall selections. Do the failures of previous top-rated defensemen have anything to do with Dahlin or what he projects to become? Not really, as the game has changed to favor pure skill, thus improving the likelihood that a five-tool prospect like Dahlin not only dominates, but does so consistently.

Earmarking Dahlin for the top spot in 2018 as early as last Spring was easy — he had an excellent season playing without the pressure of the draft or international media following his every move. However, one thing to consider about scouting prized defensemen in their draft year — it’s easier for them to plateau or struggle than it is for an average prospect to heat up and make a name for himself. In other words, a notable name can only “wow” you so much, and it could get to the point where the slightest mistake gets magnified simply because you’re either not used to seeing it, or never cared to look. Turnovers by defensemen in their draft year, previously ignored or dismissed when they were 15 or 16, are far more pronounced than those committed by offensive forwards, and the scouting community’s fickleness grows with each bad pass or blown coverage. Once the media gets a hold of a scout’s discontent over a certain player, as we say in Brooklyn, fuhgeddaboudit — the once surefire top prospect is now impaled on the horns on public opinion. Whether or not a player is capable of overcoming a seemingly pervasive landslide of criticism is on that individual, and I can only imagine how tough a fight it is get back to the top once you’ve already been knocked off.

Trust me, this isn’t a self-serving piece trying to promote the player (Svechnikov) who last month I happened to rank ahead of Dahlin in my early 2018 draft rankings. Consider this piece as nothing more than a recommendation to consider both the historical and human aspects when dealing with defensemen who in my opinion are better off being labeled as challengers for first overall rather than claiming it’s their draft to lose. Svechnikov to me is the better prospect not only for his goal scoring proclivity, but that as a Russian he’s proved to do so in a defense-oriented North American league like the USHL. Although Dahlin looked mature and poised in a far tougher circuit, the position he plays, and the nuances that go along with it, makes me think it might be a while until we see him perform at peak level in the NHL. Whether or not he surpasses Svechnikov in that regard remains to be seen.

2018 NHL Draft: 10 Prospects You Should Know About