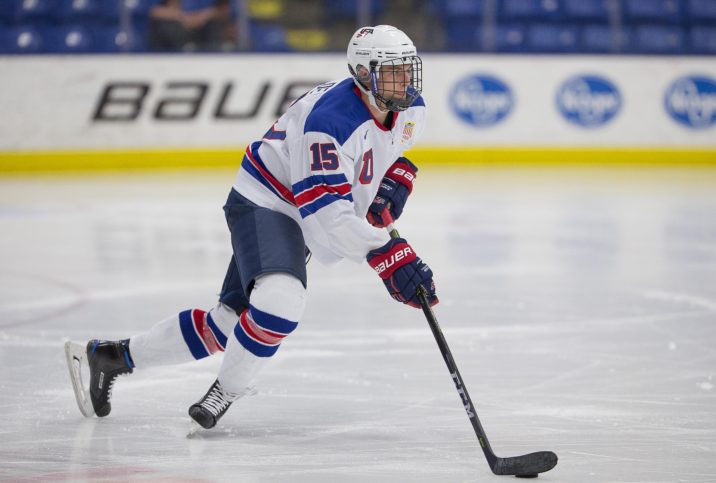 A defender with arguably the highest upside of any of his talented NTDP teammates, this Harvard-bound blueliner is a phenomenal skater with a blistering shot. Big, thick defensemen that look graceful while carrying the puck simply don’t grow on trees, and you’d probably hear more about him if his draft year wasn’t loaded with cornerstone-type defenders. Wilde is one confident teenager, maybe sometimes to a fault, as doing “too much” with the puck is something he’ll have to limit. Especially considering how talented the NTDP forwards are. Still, he is perfectly capable of playing a variety of roles with aplomb — power play quarterback, crease-clearer on the penalty kill, and even neutralizing top opponents. Wilde loves to hammer the disc thanks to a heavy shot, and he has the ability to either create his own shot from up high or finish in a speed rush to the net. Once he crosses center, he is as close to the complete package as they come, and his size and right-handed shot make him an extremely tantalizing prospect with star potential. Wilde’s risk taking can put his mates in jeopardy, so you’d like to see him go through stretches when he puts a premium on sound positioning, and is willing to refrain from deep attacks every single shift.

#NTDP: C/W Joel Farabee (Ranked No. 18) shows some silky mitts to finish, but Bodie Wilde smothered 2-on-1 & took it coast to coast. pic.twitter.com/Xv3NLf6pAr